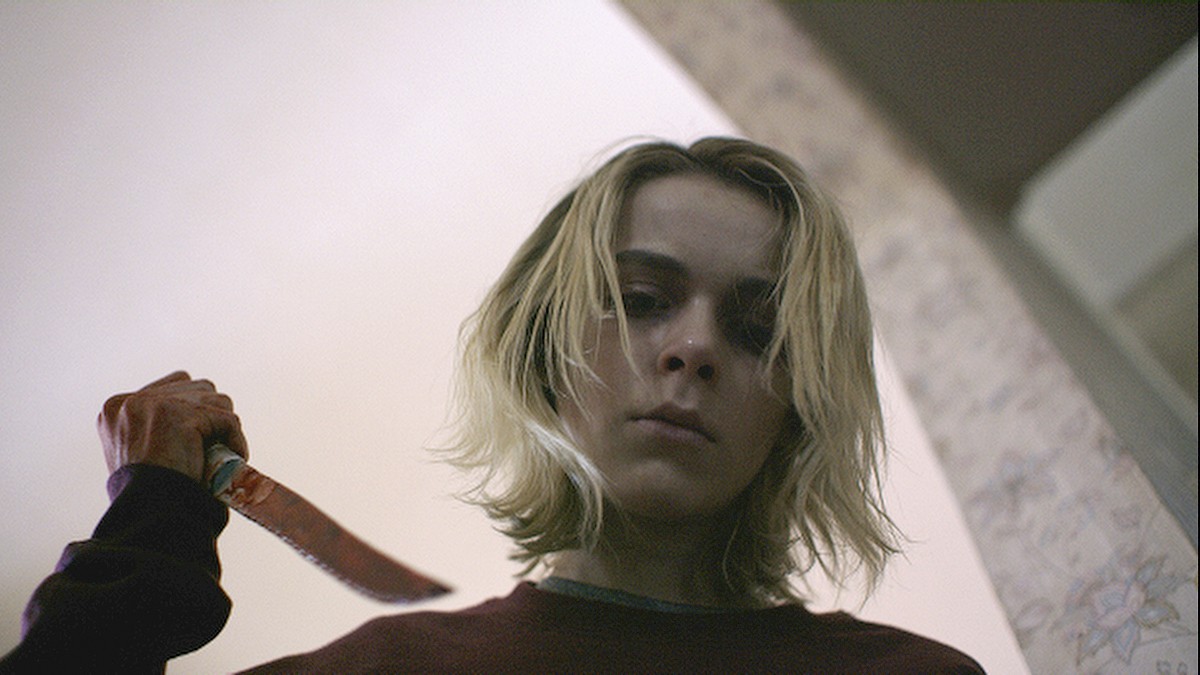 One time in college, I had to stay in the dorms by myself during winter break. With unholy noises and hauntingly empty spaces, the only places more terrifying are the greenroom at a Kid Rock concert and a hotel room Donald Trump paid for by the hour. The Blackcoat’s Daughter follows the only two girls left at a boarding school over the holidays as they struggle with coming-of-age, nascent sexuality and the dark lord Satan, who lives in a boiler room just like we all thought. This methodical possession riff further establishes writer/director Oz Perkins as one of the few horror filmmakers whose every work will have my attention, as The Blackcoat’s Daughter is a beautiful way to get the piss jitters.

The film rests on a tripod of young actresses. Kiernan Shipka is Kat, a doe-eyed innocent pianist who very quickly starts saying shit that just ain’t right. Oblique references to her parents being dead soon give way to vomiting during dinner prayers, which remains an etiquette no-no. Lucy Boynton is Rose, who may or may not be impregnated with the spawn of a brooding millennial. You thought I was going to say “spawn of Satan,” but the alternative is actually way worse. Then there’s Emma Roberts as Joan, who hitches a ride toward the boarding school with a middle-aged couple. She’s having flashbacks/nightmares to events more awful than that mermaid movie she made. Icky, awful, creepy death business unfolds in a clever, albeit not altogether unexpected, way.

Perkins has only two directorial efforts thus far: this and I Am the Pretty Thing That Lives in the House, a sumptuous ghost story that made my top 10 list last year. The Blackcoat’s Daughter was actually made first, but movie distribution is more confusing than the continued popularity of The Big Bang Theory, so it came out second. That’s notable because Pretty Thing is an improvement on virtually every aspect of Blackcoat. The methodical pacing, arthouse cinematography and controlled terror feels slightly sloppier here. Not bad, per se, just messier. Then again, whenever Satan is around, you can pretty much count on a mess.

Also like Pretty Thing, Blackcoat is awash in the feminine. It’s an aesthetic rarely applied to the horror genre. Oh sure, ladies are frequently victims in such films, but Perkins’ works feel less exploitive. The women aren’t merely bodies waiting to be arranged or plot devices waiting to…plot… In both of his first features, women are the haunted and haunters, a closed circle of terrorized and terrifyers. How refreshing it is to see movies that aim to scare without a repetitive trip to the vile, socially reprehensible well of sexual assault.

Blackcoat isn’t overwhelmingly original nor quite as exceptional as Pretty Thing. It also isn’t for audiences who effuse “OMG, that was the scariest movie ever” based solely on music-cued jump scares. It is a patient, frequently horrifying, atmospheric bit of Satan-fueled tomfoolery, which is among the stranger compliments any movie can receive.