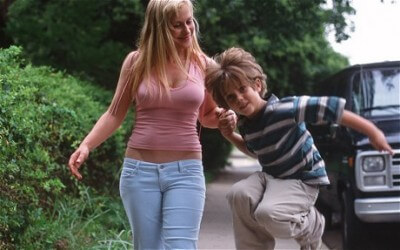 A few quick confessions: Because we now have cameras, modern photorealistic paintings have always been, at best, modestly captivating to me. Similarly, most films considered “fictional cinéma vérité” have struck me as dull navel-gazing. Where’s the great art in replicating something a compelling documentary can, by its very nature, do better? Maybe it’s my latent rage that documentaries never get the mainstream success they deserve, save for the occasional button-pushing political endeavor…

When I heard about writer/director Richard Linklater’s Boyhood, my first thought was of Michael Apted’s enthralling Up series. The sequence includes eight documentaries (in seven year intervals) that follow 14 individuals from ages 7 to 56. Compared with Apted’s towering experiment, Linklater’s decision to make a fictional coming-of-age story using the same actors for 12 years seemed—if I’m being honest—irrelevant.

Then I actually saw Boyhood and everything changed.

Linklater has done something Apted’s films haven’t; he has created something that induces in the audience the spider-web of conflicting emotions intrinsically associated with “coming of age.” People hung up on the technical aspects of Boyhood are obsessing over the marketing pitch (and again, Apted’s work is more impressive in this regard). The brilliance of Boyhood is not in how it was made. You don’t eat a phenomenal meal and marvel at the way the spices were collected. The brilliance of Boyhood is in its ability to recreate inside of viewers every element of growing up.

Ellar Coltrane is the titular boy, Mason. Over 12 years, he copes with a distant father (Ethan Hawke) and struggles with and against his loving mother (Patricia Arquette) before he can become his own person. The plot is gossamer by necessity, which isn’t to say it’s not interesting. There is genuine tension involving an abusive and drunk stepfather (Marco Perella), and the pure romance of the first time Mason truly falls in love. But it is threads that stitch this all together that Boyhood absolutely nails.

It dawns on you slowly, the realization “I’ve had some variation of that exact conversation.” Then a shiver races down your spine as feelings associated with your own personal youthful regret spill from long-forgotten places. Boyhood is moviemaking as time travel; it is both a window and mirror that allows you to see the reflection of your past on screen.

It also features perhaps the greatest performances an actress has ever given. Arquette is a goddamn powerhouse in what is an unparalleled effort. We love to give actresses awards for torturing themselves, tripping over ourselves to shell out acclaim for “playing ugly” or for being “hookers with hearts of gold.” Arquette’s tortured, caring, brave, flawed mother figure is bone-crushingly realistic and absolutely perfect. And thank God, because who knows when studios will deign to allow such an honest female character on screen again.

Boyhood isn’t a masterpiece because of its approach. It’s a masterpiece because, in the space of one viewing, it redeemed an entire genre for me and made me feel specific emotions I haven’t had since I was just a teenager. This isn’t a film; this is a uniquely singular experience everyone should partake.