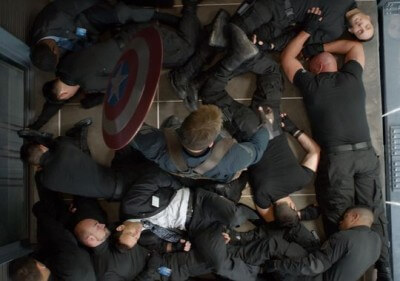 With fight choreography pickpocketed from Baryshnikov and more leaping and bounding than Pooh’s friend Tigger on cocaine, Captain America (Chris Evans) makes beating the crap out of bad guys look downright pretty. Give directors Joe and Anthony Russo credit; bucking the law of diminishing returns, the brothers found a way to make the umpteenth superhero movie to be released in the last five minutes thrilling and visually fresh. But Captain America: Winter Soldier is more than just wanton badassery: it’s smart, diverse and unafraid to completely unmoor the backbone of the Marvel movie universe.

Everybody at home tends to forget that, technically, Captain America is 95 years old. In a charming opening sequence, we see the star-spangled superfella grapple with practical issues, like having missed decades of pop culture (turns out, he does find the Internet “really helpful”). As he makes his first friend after having been thawed from the block of ice he chilled in for five+ decades, Sam Wilson (Anthony Mackie), we see him doubting his role in the new American military. The metaphor is obvious but poignant: Cap is a greatest-generation soldier whose existence is the epitome of a noble militaristic myth of integrity in combat. Modern American war is all bloody shadows and terror, conspiracies and covert public lies.

When Nick Fury (Samuel L. Jackson) tasks Cap and Black Widow (Scarlett Johansson) for a questionable mission, it begins to expose enemy infiltration of Marvel’s mega-military outfit, SHIELD. With head honcho Alexander Pierce (Robert Redford) now giving orders, Cap must ask Sam to suit up in mechanical wings as The Falcon in order to stop The Winter Solider (Sebastian Stan), an assassin with a link to Cap’s biggest regret. Also: explosions and super punches and shield throwing and plane crashes and awesome.

Seemingly every time Marvel releases a non-Thor movie, audiences and critics rush to call it the best one yet. That’s less a true barometer of that individual film’s quality and more a general disbelief that the studio keeps not totally messing things up. Winter Soldier doesn’t reinvent superhero movies or change on-screen fighting as we know it. It just kicks a ton of ass and does so with intelligence and diversity. The core group of heroes here includes two women, two black men and just one white guy. This doesn’t feel like a calculated decision to promote politically correct inclusivity, but an organic story development that also happens to be encouraging to two communities (people of color and women) who tend to get left behind in the superhero shuffle.

Writers Christopher Markus and Stephen McFeely are also given room to really tinker with SHIELD, the meticulous organizational structure that has linked the seemingly endless Marvel movies. Considering that many franchises bend over backward to preserve the status quo, it feels kinda bold. Actually, considering the character-based focus, reliance on a larger fictional world and jaw-dropping visuals, Winter Soldier feels like exactly what Marvel has made for generations: a truly great comic book.