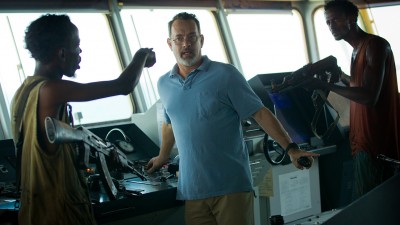 A normal response to having heard of the harrowing rescue of kidnapped cargo ship captain Richard Phillips was “Wow, I wonder how they got him out alive.” That said, nobody actually wanted every single detail. Captain Phillips covers every tiny aspect so thoroughly that it makes no sense why it feels so “Hollywood staged.” When you work with a story so publicized and recent that everyone knows the end, you can’t drag your feet getting there; you can’t build tension when we know the only person in danger absolutely, positively survives.

That person is Phillips, played by Tom Hanks, who apparently loves to play people who have a hard time making a delivery. Phillips’ character is virtually nonexistent. Despite having spent well over two hours with him on screen almost every second, the only details you can make out are that he loves his family (specifically his wife played in one single scene by Catherine Keener and two kids whose names are mentioned in passing) and that he follows the rules. That’s it. Hanks does a magnificent job emoting everywhere, but in a movie named Captain Phillips, you’d expect to know something as basic as “is this guy a nice guy in day-to-day life or not.”

The plot is as lithe as Gravity’s with less payoff. Somali pirates seize a boat, Phillips leaves that large boat for a smaller one with four hijackers and then the military resolves the situation. In between there is a lot, like a whole lot, of guns pressed to people’s heads while yelling. Normally, that’s easy drama and tension…but we know he’s gonna be okay, so nobody gets too worked up.

The bigger problem is with Muse (Barkhad Abdi), the lead hijacker.  Working from a screenplay by Billy Ray that was based on Phillips’ book, director Paul Greengrass turns Muse into a largely sympathetic character. When Greengrass made what remains the best film about 9/11, United 93, he humanized the terrorists without making them anywhere near heroic. While it’s entirely possible that Phillips’ perception of Muse was as positive as the film presents and that’s the source, but that may well be Stockholm Syndrome talking. All that can be said for sure is that Muse repeatedly took hostages with an assault weapon and is serving a 33-year sentence. Explaining motivation and providing context is what responsible art does, but excusing violent crime may go a bit far.

Hanks’ performance is expectedly drawing rave reviews. And it’s fine…maybe even good. But being asked to look scared with a shoddy East Coast accent isn’t exactly redefining the craft. Sadly, thanks to the Dutch film A Hijacking, which “coincidentally” hit DVD this week, Captain Phillips isn’t even the best “hijacked by Somali pirates” movie in the last 6 months. Go figure, but the Dutch film was pure fiction and the American one was based in reality, but the former felt real and the latter felt fake. Captain Phillips is a perfectly fine, mostly unnecessary rehashing of an incredible real tale.