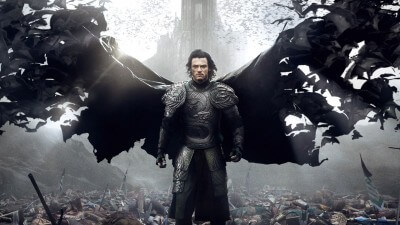 Left out of the superhero movie party every other studio is throwing, Universal made the ballsy decision to turn Dracula into caped crusader. Gone are the prominent widow’s peak, goofy accent and overtly sexual fanged penetration, this Dracula sucks blood to save people! Like a mix between Braveheart and a literal bat-man, Transylvania’s favorite son has been reformatted and given a plot full of the worst moments from The Lord of the Rings series. The nicest thing that can be said about Dracula Untold is that it is nowhere near as bad as it has every reason to be.

Generic attractive person Luke Evans plays Vlad, who totally feels really bad about all that impaling he did. In fact, it wasn’t really his fault! He was given to the Turkish military as a child and was beaten and turned into a killing machine. Hell, according to Vladdie, he was actually trying to save lives by mercilessly skewering humans on giant spikes and displaying their corpses, figuring that if people were terrified by him, there would be less fighting.

Abandoning his life of people kabob-ing, Vlad now rules Transylvania peacefully. That is, until the Turkish leader, Mehmed (Dominic Cooper), demands a thousand Transylvanian kids be surrendered to him for his army, including Vlad’s son. Vlad ain’t about that, so he goes to a creepy creature (Charles Dance) that lives in “Brokentooth Mountain” and strikes a deal. He gets superpowers for three days and then returns to normal, provided he resists the insatiable urge to drink human blood during that time. To be fair, it’s hard not to drink human blood sometimes.

This is nothing more than a superhero origin story, complete with the obligatory “testing of powers” scene. Dracula has the strength of 100 men, can heal from almost any wound, has some kind of night-vision thingie and can turn into a swarm of bats, presumably rabid. In one of the silliest scenes, Dracula commands eleventy billion bats to form a giant fist while he does some kind of Transylvanian Pilates. Your move, Bruce Wayne.

Dracula Untold is the kind of movie where the characters are so useless you can’t name them without an assist from IMDB. Vlad’s wife (Sarah Gadon) had a name, I’m almost positive, but since writers Matt Sazama and Burk Sharpless insultingly treated her as a plot device with boobs, I can’t recall what it is. Sci-fi/fantasy loves the “damsel in distress that motivates the hero” trope, leaving the one woman with a speaking part in the film doing a lot of screaming. Oh, and fun drinking game, chug something every time a character does one of those kneeling “nooo” screams toward the sky.

This all sounds terrible, but somehow it’s oddly alright-ish. The effects are fairly pleasing, it is lean (92 minutes) and the take on Dracula is a new one at least. That’s not a recommendation so much as it is a concession that I fully expected to do one of those kneeling “nooo” screams towards the sky and found myself simply shrugging.