Home » Film » Everyone is Awful 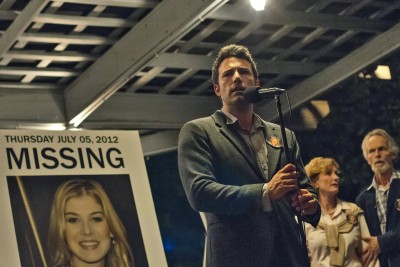 Warning to newly engaged couples: Do not see Gone Girl, a movie that makes marriage look like The Hunger Games with slightly more alleged sodomy. Writer Gillian Flynn, adapting her own novel, filters her twisty-turny whodunit (if there even is an “it” to be “whodun”) through the worst possible take on humanity. These are barely human beings and more like piles of awful shaped to resemble people. These unpersons are obsessed with either directly or voyeuristically engaging in the most biblically vile behaviors. Good thing director David Fincher sort of makes this whole thing a comedy.

Let’s back up. Gone Girl is the story of Nick Dunne (Ben Affleck) and his wife, Amy (Rosamund Pike). From the jump, Fincher deploys cloying rom-com dialogue and “meet cute” fairy tale romance sequences like sarcastic landmines. These flashbacks, pulled from Amy’s diary, are intercut with the present day. And in that present day, Amy is missing, and everyone thinks Nick killed her, mostly because a wax-faced, faux-enraged blonde anchorwoman is saying “he did it” on cable TV every night.

Nick’s only allies are his twin sister, Margo (Carrie Coon), and high-profile defense lawyer Tanner Bolt (Tyler Perry). Just as lead investigator Detective Boney (Kim Dickens) finds “nail in the coffin” evidence against ole schlubby hubby, things take a turn that will only be revealed by jerkfaces and entitled asshats who think people who don’t read literary source material deserve to have other mediums of entertainment ruined for them.

Approaching Gone Girl gets…complicated. And not just because there’s more wicked trickery here than is found in a politician’s playbook. Objectively, in a strictly technical sense, Gone Girl is almost inarguably fantastic. Fincher’s frequent collaborators Trent Reznor and Atticus Finch crank out another sensationally ooky score; Affleck gives perhaps the performance of his career; Pike declares that, dammit, she will be famous now; Fincher spray paints more of his stunning trademark noir-thriller graffiti visuals and the supporting cast are all flawless…yes, even Perry.

The question is how to reconcile that against a legion of seemingly misogynistic suggestions and the presence of a male lead treated too sympathetically despite being total douche-nozzle. Thankfully, Fincher gives us an answer, provided you’re looking for the clues. These include things like Nick’s comments about “women constantly picking him apart,” a bystander quipping about how close Margo and Nick seem (“that’s twincest”), Detective Boney’s final interrogation and Tanner Bolt’s last words. This is parody. It’s a fart noise in the face of people who DVR Nancy Grace’s show. It’s a sinister satire of husbands and wives who fantasize “harmlessly” about murdering their spouses. This is Flynn stretching humanity to ludicrously evil bounds and letting Fincher dance around in her arterial spray.

Gone Girl defies expectations by both being and mocking what it is. At once a condemnation of murder-as-daydream and a bloody fairy tale, it is a singularly weird experience that marks a high point for several actors and a low point for its reflection of modern America’s basest desires.