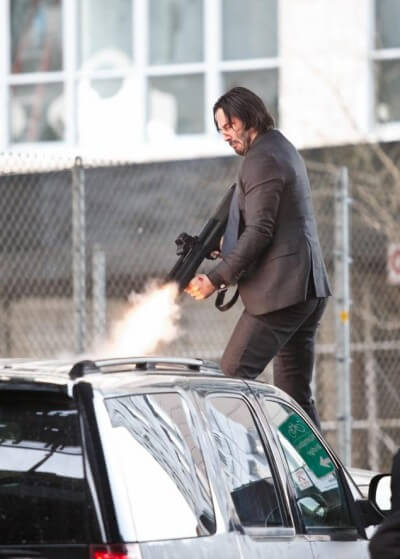 John Wick is so good at killing, he had to bury his guns beneath a cement floor just so he wouldn’t keep murdering.

If you aren’t picking up on it, John Wick is ridiculous. Directed by long-time stuntmen David Leitch and Chad Stahelski, it is exactly the sort of movie you would expect from long-time stuntmen: brutal, close-up fighting, nearly nonstop gunplay and the slightest story legally allowed. It’s giddy dumb and awesome stupid, the kind of movie where audiences feel free to audibly “ooh” and “ah” at the various ways John Wick reaps souls. Oh, and you can’t ever call him John or Wick. It’s John Wick. Every time.

There have been gossamer-plotted revenge movies, but John Wick lowers the bar even further. A former hitman nicknamed the Russian word for bogeyman, so named because he’s who you’d send to kill the bogeyman, John Wick (Keanu Reeves) quit mafia life for a lady. Then lady died. Sadface. Before she passed, she ordered John Wick a puppy to help him grieve. With lady dead, John Wick only loves his Mustang and his doggie.

Reeves can play two characters: confused and blank. Literally, the only personality trait John Wick is said to have is “focus.” Calling John Wick a one-dimensional character is to round up from a quarter of a dimension. But you don’t go see a movie like this to pull apart an intricate character, you go because “oh my God, John Wick killed that guy without looking at him while John Wick was killing that other guy.” It’s impossible not to marvel at the fluidity of the stunt work, the pace of the grappling and the variety in the action.

And yet, this isn’t the kind of film that encourages real-world violent thoughts. It’s the best kind of hyperviolence, in that it is joyfully unreal. Don’t laugh…movies like this are kind of like ballet. It’s a story told with bodies, punctuated with music and more concerned with a feel than plot progression. Leitch and Stahelski deliver what was promised: one relentless action sequence interrupted by people talking long enough to tell you what’s next. John Wick is comfortable being what it is, a rare trait these days.