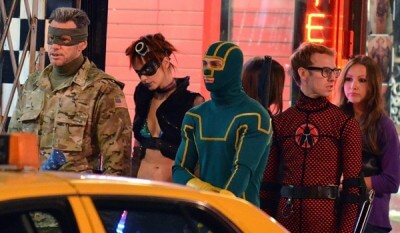 Writer/director Jeff Wadlow’s Kick-Ass 2 is “morning radio shock jock” offensive, which is a thematic departure from the source material written by Mark Millar. But is it better to flinch from the vile, reprobate, misogynistic glee of Millar’s comic miniseries or to be a limp, confused juvenile offender, flipping off passing cars and then running away when they stop? There is something truly horrifying and offensive buried at the movie’s core, but we’ll get there in a bit.

Since we last left Dave Lizewski, aka Kick-Ass (Aaron Taylor-Johnson), the world’s first “real” superhero, the idea has spread like herpes at the resorts where they film those MTV competition shows. The streets are just filthy with powerless, lame superheroes using spandex and stun batons to plug the sportscar-shaped hole in their midlife crisis. But the sociopathic son of the last film’s big bad guy, Chris D’Amico (Christopher Mintz-Plasse), aims to be the world’s first “real” supervillain. To that end, he recruits an army of mercenaries, gives them racist supervillain names like Gengis Carnage and swears revenge on Kick-Ass.

That’s the “A-plot” if you will, the one that sees Kick-Ass join a team called “Justice Forever,” which could have been a sick and hilarious skewering of the recent Marvel movie craze that culminated in the Avengers. Instead, Jim Carrey just has his dog bite mafia guys on the scrotum. Still, points to Justice Forever for having two female members, as opposed to the Avengers’ one. Sadly, those points are deducted because one of them is Night Bitch (Amy Anzel) and she fights crime in her bra. Testicle biting and sexism aside, it’s not the A-plot that brings the offensive trouble.

In the first film, the hubbub was over Mind Macready aka Hit Girl (Chloe Grace Moretz) , an 11-year-old vigilante who was quite murder proficient. But say this much: the first installment did not sexualize her. Apparently, since she’s all of 15 in this one, she’s fair game for a “grass on the field” joke and multiple references to her having “strange sensations” in the presence of hot young male flesh. Guess what? Still not the worst problem.

The problem isn’t even the treatment of her “plastic” high-school nemeses, wherein she one-ups Mean Girls’ burn book catfight by causing projectile vomiting and projectile diarrhea (it’s why God invented CGI). The problem is the lesson Mindy learns. A 16-year-old actress playing a 15-year-old girl explains in the end that it’s a good thing she skipped her childhood and became an adult, kisses a dude and then rides off into the sunset. “Girls will be girls” has apparently become “you should grow up as fast as you can.”

Kick-Ass 2 packs some cool visual swag and is never boring. Hell, even its insanely cartoonish violence is easily dismissed, unless assaults with lawnmowers and sharks suddenly spikes. But the “this is the real world, not a comic book” dialogue repeated ad naseum combined with bizarre attempts to deliver some kind of sincere moments tank a franchise nobody was asking for. Kick-Ass was a clever sneer at “grim and gritty” superhero movies; Kick-Ass 2 really isn’t much of anything.