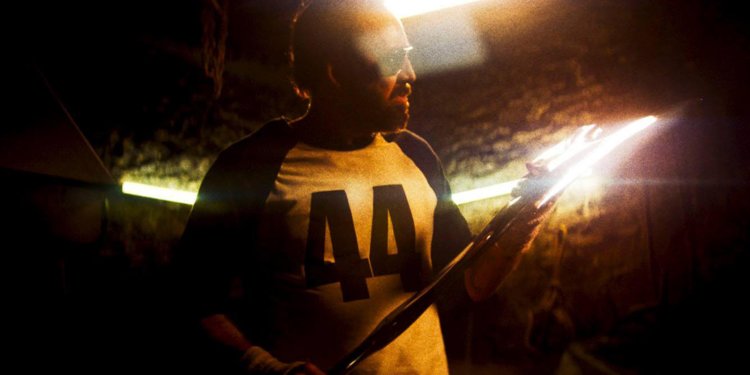 In a fair and just world, Mandy will become such a massive cult hit that people will replace the tired and lame repetition of “Oh, hai Mark” with chants of “You vicious snowflake!” or “You ripped my favorite shirt!” From a random “Cheddar Goblin” to a former Law & Order lawyer whipping his junk out while listening to a song he wrote about himself, writer/director Panos Cosmatos’s film traffics in gleeful absurdity. A surreal revenge tale painted in hallucinatory brushstrokes, crammed with the best kind of inoffensive and outlandish gore, Mandy is a fearlessly original love-it-or-hate-it proposition.

Mandy begins with an opening text crawl so goofy, George Lucas referencing space taxes is now in second place. Mandy (Andrea Riseborough) and Red (Nicolas Cage) are true-love lovers living in what appears to be a fantasy scene airbrushed on the side of a van in 1983. One day, a handful of “weirdo hippie types” show up. The leader of the Children of the New Dawn, Jeremiah Sand (Linus Roache), started his cult after his music career failed. If you think that sounds like an outlandish plot point, Google “Smallville actress.”

After he catches a fleeting glimpse of Mandy, Jeremiah commands his acolyte, Brother Swan (Ned Dennehy), to kidnap her by blowing a magic rock horn and summoning leather-clad extras from Hellraiser who are riding ATVs and drink blood. Although “avenge the murdered lady” is a tired, gross plot device, Mandy doesn’t revel in the torture of women to the same sick degree as most in the subgenre. Although it is definitely yet-another example of fridging, the grotesque violence is almost entirely saved for Red’s bonkers murder quest.

And it is a true fantasy quest, complete with the crafting of a giant metal decapitator sword/axe/scythe-thing, prophetic visions, and religious themes of damnation and redemption. Mandy is as ridiculous as it is meticulous. Cosmatos isn’t flinging random nonsense against a neon-graffiti-covered wall; it is filled with intentional symbology. The essence of a good B-movie lies in its maniacal and rabid sincere approach. That is a sentence that also describes the very essence of Nicolas Cage. No one has ever been more comfortable exposing every possible bit of eye white, face covered in blood, spewing pitch-perfect insanity like “I am your God now!”

From the gorgeous faux-painted chapter titles to the synth-y perfection of Jóhann Jóhannsson’s score, Mandy is a real-deal cult-movie in an era rife with preening pretenders. More than anything, it represents the kind of confident strangeness that can make cinema feel legitimately bold and weird instead of safe and same-y. Honestly, it’s kind of great that it was so quickly released for digital download, as watching it that way first will make going to the theater to see the limited showings feel more like hitting up a midnight movie event.

If you are the type predisposed to hate something like Mandy, once will be too much. But if you’re the sort who revels in violent abstract fantasy lunacy, make room in your regular rotation.