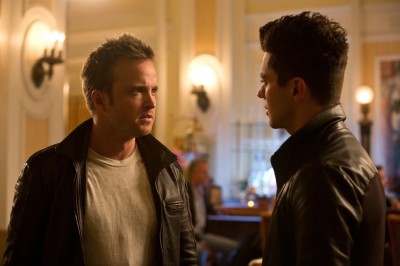 The most important thing to know before attempting to endure the lumbering bore that is Need for Speed is this: every single character in the film is unspeakably dumb. Presumably set in a world where humans never mentally evolved from an animal state, the movie features increasingly nonsensical behaviors by derpy morons whose ability to dress themselves is as impressive to us as their ability to defy physics with cars.

This next part is gonna sound like a spoiler, but (A) something has to have once been “good” to be “spoiled” and (B) it happens early, motivates the whole plot and is so obvious they may as well have named the character “Ima Gonnadie.” Pete (Harrison Gilbertson), Anita’s little brother, is killed by Dino in a three-way race with Tobey. Despite literally hundreds of witnesses, Tobey is blamed and does 2 years for vehicular manslaughter. Once out, he does what anyone seeking revenge would do: He convinces Julia (Imogen Poots), the hot assistant of a British billionaire, to let him drive a $3 million car across country to compete in a secret, underground car race run by a reclusive DJ named the Monarch (Michael Keaton) to shame Dino. This one’s for you, Petey!

It really can’t be emphasized enough how cosmically ignorant these characters are. Here are but a few examples: Dino wants to prevent Tobey from making the race, so he offers a million dollars to anyone who stops him from making it there; but when the pair run into each other in a hotel, Dino doesn’t call the cops and say “hey, that parole-violating guy you lost in a high-speed chase, I know where he is right now.” A character strips nude while quitting his job for no discernable reason. Dino bribes authorities to cover up Pete’s murder but doesn’t destroy the car he used to kill him. While driving cross-country, Tobey declares they are in such a hurry they can’t stop for gas and must “hot fuel,” as his posse tops him off while driving side-by-side. Then he stops for gas 20 minutes later.

And so on and so on. What the Fast and Furious movies understand is how to have fun, suspend our disbelief and get us to root for the charismatic cartoons driving gravity-defying speed machines. Despite having much more talented actors in Paul, Cooper, Johnson and Keaton, Need for Speed is a pale, inert, impotent, wholly imbecilic impression of its competitor. If you fall into the target demographic of “person aroused by car commercials,” have fun. No one else will.