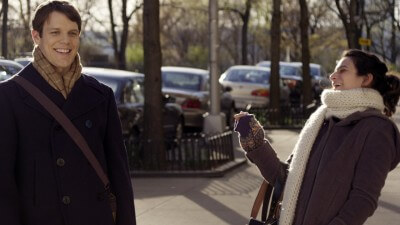 I do not have a uterus. If I understand biology, I never will. So the issue of abortion has remained at arm’s length from me. This isn’t to say I have no empathy or opinion regarding America’s hottest of hot button issues, only that I realize it’s located under the heading “women’s health” for a reason. As Roger Ebert famously said, “Movies are like a machine that generates empathy.” If Rog were still here, he’d have applied that quotation himself to Obvious Child.

Writer/director Gillian Robespierre’s first film is billed as a comedy. It isn’t. It’s a thoughtful, genuine drama that features a very funny woman. That woman is Jenny Slate, whose brief stints on “SNL” and “Parks and Recreation” merely flashed talent that is mined for gold here. Slate’s character, Donna, is perhaps the most fully realized female character in memory. She’s a stand-up comedienne who opens the film by talking about vaginal residue on her underpants. It’s a warning shot as if to say “we’re not doing the sanitized version of this shit.”

Donna is a woman without artifice, comfortable telling rooms full of strangers about her flatulence. When her boyfriend, Ryan (Paul Briganti), dumps her, Donna goes on a bender that includes the most uncomfortable stand-up routine not performed by a former Seinfeld cast member. Then she meets Max (Jake Lacy), a wide-grinning, genuinely nice guy. In one of the more adorable cinematic one-night stands, the pair does as much silly dancing as fornicating. Unfortunately, before they can settle in to anything real, Donna is able to legally wear a “baby on board” necklace.

What’s amazing about Obvious Child is there’s never a question about Donna choice. She makes her decision to terminate the pregnancy, and her friends and family unanimously support her. The question Donna struggles with isn’t whether or not to let Max weigh in, it’s whether or not to tell him what she has decided she is doing. Seeing a woman on screen as an independent agent of action is so rare we make up “bare-minimum” feminist tests to see if a movie is at least non-misogynistic. To say that Obvious Child is in rarified air is a Bechtel-ian understatement.

Slate is ridiculous. Bouncing from genuine torment to quippy witticisms, she is as real a fake woman as has ever been filmed. Sadly, the film kinda wobbles around her. The supporting cast, including Gabby Hoffman as her friend Nellie, is fairly useless. Weirder still is a bizarre sequence with David Cross that holds no plot or character value. But Robespierre gains control about halfway through, and once she does, she doesn’t let go.

Those complaints take a backseat to Slate’s work and Robespierre’s brazen, much needed commentary. I’ve seen online ads boasting Obvious Child as the “funniest abortion comedy” ever made, they stress the humor as if to soften the blow. But this content shouldn’t be undersold. So let me say it: Obvious Child is one of the most empathy-inducing, genuine films featuring a cast of women tackling a women’s issue ever made. Period.