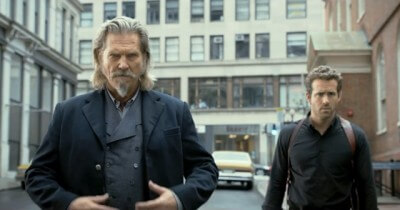 The good news is, it appears Jeff Bridges at least entertained himself while on the set of R.I.P.D. Whether the legendary thespian was trying to dive into the Depp by delivering a delightfully weird caricature for mass appeal or whether he was just plain bored, the result is one of the strangest performances in a career most celebrated for a drunken bowler. Ryan Reynolds was also in attendance.

R.I.P.D. is Men in Black with ghosts instead of aliens, Bridges instead of Tommy Lee Jones and Reynolds instead of a movie star who has earned his movie star status. Rounding out the cast are a lethargic Kevin Bacon and Mary-Louise Parker, who will be spared the humiliation of what she does to Bridges’ goatee because nobody will see this movie. Based on a comic book that literally had to be better, writers Phil Hay, Matt Manfredi and David Dobkin did director Robert Schwentke no favors, but Schwentke directed The Time Traveler’s Wife, so he had it coming.

Reynolds plays Nick, a good cop who momentarily makes a bad decision when he and his partner, Hayes (Bacon), stumble on some gold. When Hayes guns down Nick, nobody is surprised, because everyone in America knows Bacon kills. Everything goes still like a 1990s Gap commercial or a Zack Snyder fight sequence, and Nick is in a netherworld facing Proctor (Parker), who informs him he is now in the “Rest in Peace Department.” He’ll be paired with Roy (Bridges), a derpy relic of the 1800s, and tasked with bringing in “Dead-Os.” Yes, the undead who escape into the world of the living and must be stopped are called “Dead-Os,” even though the 8-year-old who thought that up isn’t given screenwriting credit on IMDB.

The backdrop is the typical wacky “buddy cop foreplay,” in which two police officers whose heterosexuality is repeated ad naseum fuss and flirt with one another before committing to being “broskis of the law.” When the pair discover the gold that got Nick killed is actually part of a device that lets the dead change the magic tunnel that whisks them to the afterworld from “suck” to “blow” and return to earth, they must stop it. Or not. Nobody really cares. Oh, and “normal people” see Nick as an old Chinese man and Roy as supermodel Marisa Miller. This allows thinly veiled racism and boob jokes.

R.I.P.D. is woefully unclever, painfully formulaic and a remarkable waste of talent like Bridges, Bacon and Parker. Reynolds, on the other hand, is right where he belongs, having squandered so many chances at superstardom he now has to start over in the back of the line. R.I.P.D. is what happens when the movie factory has a glitch on the assembly line and the pattern (comic book adaptation + quirky actor + special effects) doesn’t work. It’s hard to get too worked up about it, what with Summer 2013 already delivering The Hangover 3, the new standard for “not trying,” and The Lone Ranger, which has the most racism $200 million can buy. R.I.P.D. will just fade to oblivion, where Reynolds will be waiting.