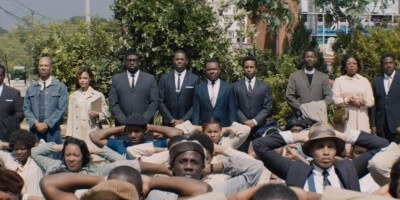 “And in July of 2013, the Supreme Court gutted the Voting Rights Act.”

Writer Paul Webb did not include that text in his script for Selma, and director Ava DuVernay did not close her powerful film with those lines. But they could have. Heck, maybe they even should have, just to drive the point home.

At a time when “die ins” on public roadways have emerged as a darker echo of Martin Luther King Jr.’s “sit ins,” Selma is the proverbial “right movie at the right time.” That is, if audiences understand the present day urgency that underscores every scene and the call to democratic action explicitly laid bare.

Selma tells the story of the 1965 march led by King (David Oyelowo) from Selma to Montgomery, despite violent opposition from Alabama’s Governor, George Wallace (Tim Roth). In one of 2014’s most haunting, impactful scenes, DuVernay presents the bombing death of four young girls as a sort of “call to action,” in exactly the same way the deaths of Michael Brown and Eric Garner have motivated so many. “Now what?” DuVernay seems to ask as the tattered dresses of children float by.

King explains to President Lyndon B. Johnson (Tom Wilkinson) the “what” that must come “now:” Voting protection. In one of the film’s many fascinating logical explications, King explains that justice won’t come for black bodies because elected prosecutors chosen by nearly all-white electorates won’t press charges and all-white juries look the other way. Change will come from voting booths, and in 1965, thousands of Americans demanded access to those booths with the march of their feet.

Selma has taken fire from both sides. LBJ’s assistant on domestic affairs stated publicly that the President is the one who had the idea for the march on Selma, not King, and was not an obstinate politician as depicted. DuVernay’s decision to depict him as such, historically accurate or not, is narratively effective in avoiding yet another “white messiah” story, wherein LBJ rides in on the Voting Rights Act to save black Americans. The criticism from the other side has been thornier, with Civil Rights historians objecting to the oversimplification of grassroots groups and figures other than King and the omission of several key individuals. Approached from a purely historical standpoint, perhaps Selma the film is best seen as a prompt to revisit the real events of Selma in context.

But there’s something important and vital here beyond historical accuracy, a vibrant and timely undercurrent buoyed by Oyelowo’s complex and muted performance and DuVernay’s well-measured drama. Selma is a scathing indictment of any who fail to exercise their right to vote and a condemnation of the Supreme Court’s foolish “racism is dead” decision to limit voter protection in the South. As a modern allegory, Selma is vital.

It’s hard to divorce a movie like this from its real-world context and assess it purely as a film. It feels shallow to do that, wrong somehow. Yes, Selma is spectacularly staged, impressively acted and narratively satisfying. But it is also something much, much more and we need much, much more like it.