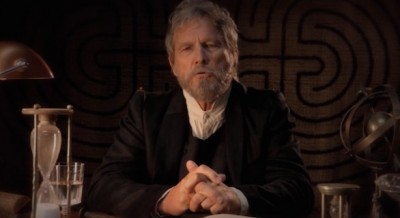 Fail gloriously, if you must fail. Go down swinging for the fences, punchdrunk and confident you’re making something truly awesome that people will love, even if it winds up a steaming pile of poodoo we mock. I respect the noble fool, the proud creator of disaster who clearly put everything into a creative vision beloved by only himself. I have no respect for the people who made The Giver, a movie about the importance of emotions made by people who seem to have none.

Lois Lowry’s award-winning book has its fingerprints all over the modern spate of dystopian young adult fiction. Thus, you’d think its adaptation would have been handled with some measure of care and not the “eh, whatever” approach director Phillip Noyce and writers Michael Mitnick and Robert B. Weide took. The film opens some indeterminate time after some indeterminate apocalyptic event. From now on, if you don’t say what that apocalyptic event is, I’m going to start inserting my own.

Set some time after “The War of Frog Flatulence,” society purged all emotions and memories from its people. From birth, everyone is made to be as equal as possible, down to physical characteristics and experience. It’s basically socialism as understood by Glen Beck. One person, “The Receiver of Memories,” is tasked with remembering all the bad stuff (and good stuff) that came before so that he or she can advise a council, led by the Chief Elder (Meryl Streep).

Jonas (Brenton Thwaites), who just turned 18, is chosen to be the next Receiver, which turns the current owner of that title into “The Giver” (Jeff Bridges). As expected, the emotions and memories awaken Jonas, so he tries to bring down the whole society by going sledding with a baby. For serious, that’s the climax.

I hope for the sake of the three young leads (Thwaites, Odeya Rush and Cameron Monaghan) their wretched, tone-deaf, leaden performances were a result of poor direction from Noyce. If not, they should begin rehearsing for “extra” roles on “Dog with a Blog.” Streep and Bridges are great, in the 10-15 minutes they get to spend with each other. You almost see the fire in their eyes the minute they realize they are finally standing in a room with someone else capable of “acting.”

Potentially more irritating is the way the film violates its own rules with such reckless abandon. Nobody can feel anything, until the plot needs them to. Nobody can remember anything, until it makes for a nice dramatic exchange of dialogue. It would be positively maddening if the movie were worth caring about in any way, shape and or form.

The Giver is blasé filmmaking at its finest. The underlying promise of the original work isn’t shat upon, it’s just ignored. This could have been an actual “young adult” film, letting preteens know that the conflicting waves of emotion they’re about to receive are worth it. Instead, it’s a movie where a holographic cameo by Taylor Swift isn’t the worst part.