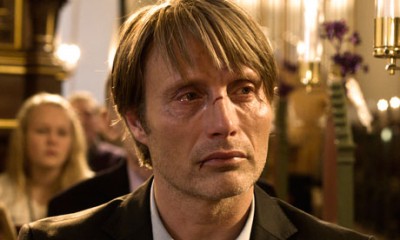 It was Mark Twain who separated the act of untruth into three categories: “lies, damned lies and statistics.” Writer/director Thomas Vinterberg and cowriter Tobias Lindholm (A Hijacking) make a case for a fourth category with Jagten (The Hunt): “lies about molestation.” It’s a type of lie that’s so vile, it shouldn’t be mixed in the general population with the other lies out of a fear for safety.

In The Hunt, this “fourth category” lie had no malice in its telling, as apple-cheeked kindergartner Klara (Annika Wedderkopp) didn’t mean any harm to befall her teacher, Lukas (Mads Mikkelsen). He had shown her such kindness when she needed it, at a time when her mother and father (who is Lukas’ best friend), were routinely shouting and neglecting her. She developed an innocent crush that became something dangerous when Lukas explained to her what appropriate boundaries are. Armed with accidentally adopted sexual language she overheard from her brother, Klara’s tiny broken heart lashes out in a false confession to another teacher that is too anatomically specific not to take seriously.

That’s the stunning part of The Hunt: Nobody really does anything wrong. Well, no adult anyway. Lukas is fighting for custody of his teenage son and working to put his life back together, and with one small spoken sentence he may lose everything, including his new girlfriend, Nadia (Alexandra Rapaport). The fellow teachers who investigate the claim can’t be faulted for their disgust; how else do you behave when you find out one of your peers who was entrusted with protecting children allegedly did the unimaginable? Grethe (Susse Wold) actually vomits during Klara’s questioning, entirely out of guilt that she was unable to keep this tiny child safe. Theo (Thomas Bo Larsen) tries to listen to Lukas but finds himself nearly maiming him, which is kind of understandable for a father who thinks his best friend molested his daughter. And even Klara, to her credit, realizing the magnitude of her slip tries to take it back, but things have moved beyond her control. How much anger can you direct at a 5-year-old for false evidence?

In case you couldn’t guess, The Hunt is not exactly date movie. In fact, unless you enjoy the feeling of simmering in a warm tub smothered with guilt gravy and stewing in awkward juice, things are going to get uncomfortable. But as Mikkelsen carves out a hauntingly muted, complex character who finds a moral fortitude and instinct to fight back inside himself more powerful than even he imagined, the story moves towards something that looks like what the Danish equivalent of “okay” may be. Although the slow pace has purpose, it does drag a bit, which isn’t what anyone wants in their “false accusation of child molestation” movie. But the creepiest part is how easily the movie unfolds, leaving audiences wondering about the unspeakable power of the unspeakable “fourth category” of lies.