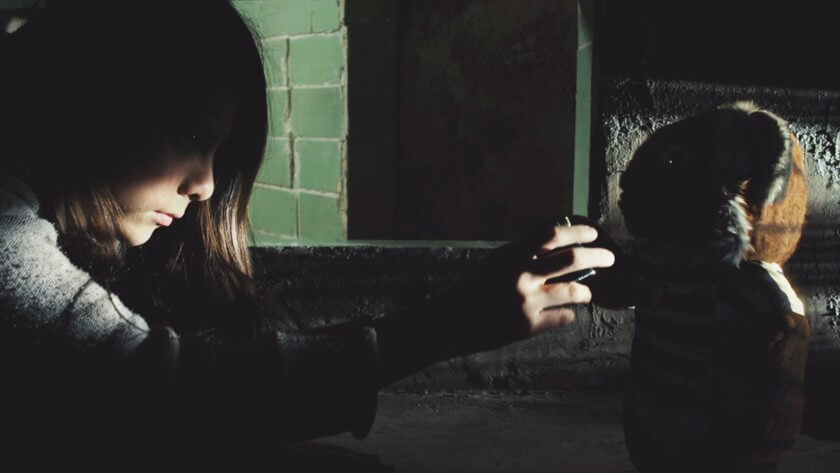 A Walt Disney fairy tale about El Chapo told through the language of Gabriel García Márquez and visually painted as if guided by Frida Kahlo’s hand, Tigers Are Not Afraid is some kind of special. Writer/director Issa López obliterates genre boundaries to tell a story about the globally ignored collateral damage of cartel violence: orphaned children.

Given how press clippings and extensive facts roll off Americans’ backs like drops off blood on a border wall, maybe this is how the tragedy of the drug war will hit hearts here best? Make it literally “horror.” Make the children physically scarred and stalked by the dead bodies of their parents. Make their imagination so infused with trauma that a stuffed tiger will shatter your heart when it comes to life. Make the ending hurt, with just enough optimism so maybe, just maybe, you realize you should probably do something.

Tigers Are Not Afraid may be a Spanish-language film set in Mexico, but the opening scene speaks fluent American: Children hide under desks as gunshots are heard outside a classroom. The teacher was in the middle of a lesson on fairy tales, so she tries to calm down Estrella (Paola Lara) by giving her three pieces of chalk, saying that each one is a wish. Estrella uses the first piece to wish for her mother to come home. She’ll soon wish she hadn’t done that…

Estrella falls in with a group of orphans, led by Shine (Juan Ramón López). Think of them as The Lost Boys from Peter Pan by way of Sicario. They survive on what they steal, which includes a phone that Shine poaches from a local gang that happens to be very, very important. As the cartel closes in on the children, Estrella uses her remaining wishes in increasingly desperate fashion, leading to a final act that will check that your heart is still capable of empathy by stomping on it vigorously.

Tigers Are Not Afraid is stunning and sophisticated in its visual economy. From rooftops littered with dolls hobbled together from mannequin parts to dungeons filled with reanimated corpses, the film is the best kind of ugly beautiful. You can’t (and shouldn’t) look away, as López encourages you to run full-steam into the brick wall you clearly see coming.

Just ask George Lucas, relying on the acting prowess of children is always a dicey proposition, but López’s direction prompts some of the finest acting done by performers of any age this year. Juan Ramón López is somehow able to convey a pile of emotions bigger than his adolescent body, flicking between sullen fury and pleading naivete. Paola Lara never, not once ever, trundles into melodrama, making the sorrow she bears somehow that much heavier.

At less than 90 minutes, Tigers Are Not Afraid manages to be a macabre urban thriller, exposes a grotesque blind spot obscuring very real victims, and looks gorgeous doing it. That’s a whole lotta words to use describing this when one will do the same job: Wow.