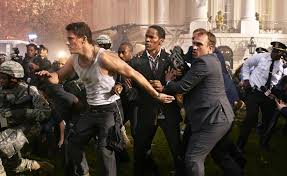 The nicest thing that can be said about director Roland Emmerich’s White House Down is that it is the second best Die Hard rip-off set in the Presidential estate released in the last four months. Writer James Vanderbilt has piled words as the ancient Egyptians stacked bricks, building a great pyramid of stupidity to serve as a tomb for the dignity of all involved. The sparse few who have publicly admitted their affection for the film (after snorting lines of 1980s-action-movie-flavored nostalgia-cocaine) claim to have enjoyed the film because “hey, it knows what it is.” Well, just because a stupid asshole knows he’s a stupid asshole doesn’t mean you should date him.

The John McClane stand-in here is Cale (Channing Tatum). He has a first name, but no one uses it, because people love the sound of cabbage. He did three tours in the Middle East, which is modern screenwriting’s way of explaining how he has super awesome fighting abilities like GI Joe on peyote. He takes his daughter, Emily (Joey King), with him to an interview for a job with the Secret Service because she loves President Obama, who for legal reasons is renamed President Sawyer (Jamie Foxx). Unfortunately, the interview is with Finnerty (Maggie Gyllenhaal), an old college friend who remembers Cale as no good. That’s Cale with a “C;” kale with a “K” is packed with nutrients!

Because Vanderbilt and Emmerich had a sleepover and passed out watching The Rock, lots of stuff gets stolen from that movie, which suddenly feels like a work of unmitigated genius. The head villain, Walker (James Woods), betrays his country because he feels his country betrayed him. So he gets former military dude Stenz (Jason Clarke) to assume control of the White House in the most lethargic takeover ever. Wal-Mart greeters would have put up more of a competent fight than the trained servicemen do. And then there’s lots of silliness with rocket launchers and armored limos that culminates in the most guffaw-inducing moment to ever feature a young girl waving a flag, and bear in mind most high-schools have flag teams.

White House Down may be racist too, it’s hard to tell. It certainly goes out of its way to get the black president into some basketball shoes so he can yell “get your hands off my Jordans.” What’s certain is that it is horribly shot, with some throwaway footage of bystanders somehow betraying the green screen behind them. It is also a terrible misuse of the character actor Richard Jenkins and of Gyllenhaal, who is perpetually mid-whimper; her ever-watery eyes are filmed so close she looks like a living Margaret Keane painting.

And so on and so forth. Some small joy can be derived from this movie that’s so obvious it uses three scenes to mock a weeping Glenn Beck stand-in before shooting him, possibly in the testicles. But it’s small, small joy, as the film is so wretched and simple-minded, you should actually feel guilty if it’s your guilty pleasure. White House Down is a guilty, guilty pleasure and a bad, bad movie. Look for that pull quote on posters everywhere!