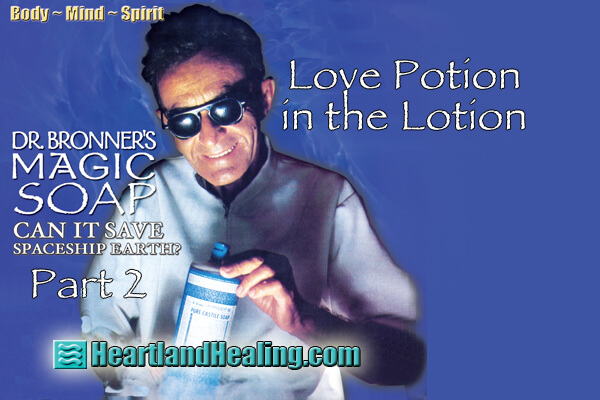 Dr. Bronner’s Soap: As Good as It Gets

In the previous Heartland Healing, I noted that fans of Dr. Bronner’s Magic Soap usually remember exactly where and when they first experienced the brisk tingle that comes with the peppermint Castile. Beyond that, it was Dr. Bronner’s personal philosophy printed on the label of each bottle that made the soap and the company so special.

Historically, soap has been made from very simple, natural ingredients through a process known as saponification. Take an alkaloid substance, (lye was used in the old days,) then add either plant or animal fat in the proper balance, and the result is soap and glycerine. That’s a very simple explanation of what is a rather simple process. Unfortunately, most modern “soaps” are made from chemicals and are actually detergents rather than soap. Just look at the labels on some soaps, shampoos and bodywashes and see. Even though they can call themselves soap, they often aren’t. Commercial soap is pretty much the last thing I’d want to put on my skin and here’s why.

And you want to bathe in that?

Todd Hurley of family owned No Name Nutrition in Omaha has had Dr. Bronner’s Magic Soap on the shelf since the store’s beginning back in 1976. His customers’ words are a testimony to the soap’s versatility.

“The ironic thing is the soap lasts so long that it isn’t huge numbers we sell but it’s steady and loyal,” Hurley said. “We have people who buy it and when they go camping, it’s the only soap they take because you can do anything with it. People shower with it, wash their hair, brush their teeth and also use it to wash dishes or clothes. It’s remarkable.”

The Bronner family traces their soapmaking heritage to 1858. Now, 160 years later, their soap remains true to its heritage. Some things don’t need to change when they’re as good as it gets.

Soap and hope. There isn’t much inside a bottle of Bronner’s soap, just simple ingredients. But on the outside label? That’s a different story. It’s packed with words expressing what Dr. Bronner called the “Moral ABC”. Emanuel Bronner was a remarkable man. He built a company that was the physical manifestation of his belief in humanity, oneness and love. His legacy continues through the company he left to his sons and now through his grandsons. Dr. Bronner’s son, the late Ralph Bronner, personified that very message, demonstrating the kind of love, compassion and generosity his father preached. He traveled widely visiting with people while dispensing soap, hope and hugs. He went to schools and spoke to challenged students about the unlimited potential of realizing their dreams. Everywhere he went telling the story of his father, a man who lived through inhuman treatment who ended up teaching the exact opposite. I met Ralph by chance at a health food store in Burbank back in the ‘90s and was able to interview him years later for Heartland Healing.

“You know, many people have a story about a humble start but I don’t think you’ll ever hear of a greater handicap than this: My father escaped from an insane asylum, travels penniless to Los Angeles where he knows absolutely no one, had no idea where he was going to sleep the first night. Turns out it’s on the roof of the YMCA,” Ralph Bronner told me.

“Dad liked to say, ‘I was penniless with the pigeons.’ He dies fifty years to the month later, leaving us a four-million dollar corporation that he was operating totally blind for the last 20 years of his life out of a bedroom in a house in Escondido, Calif. in northern San Diego county in a grove of avocado trees. Can you see how it would be impossible to make up a story like this?”

Only a company that operates on such pure principles as the “Moral ABC” could produce a soap as pure as Dr. Bronner’s Magic Soap and keep it unadulterated for 70 years.

It’s been over 30 years since I stood in a shower in a small apartment over the drugstore on Main Street in Yankton, So. Dak. It was the dead of winter on the morning after a gig with Ogden Edsl. My host left me with just a washcloth, a towel and a single bottle of a minty-smelling liquid soap. I stood too long in the shower reading the label while rinsing that tingly lather. Too late. The water ran cold and my body was electrified with essence of peppermint. I told you no one ever forgets their first time.

Dr. Bronner’s was ahead of its time, all-natural with simple, non-chemical ingredients. For years it’s been a soap I have relied on without worry. Emanuel spent years teaching that the most important message on a soap bottle was not about the ingredients.