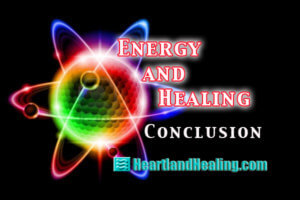 So, let’s wrap this up; this thing about energy. This is installment three of three. In Part One, we established that it’s pure science that all of creation — the stars, planets, oceans, trees, rocks and our bodies — are nothing but pure energy. That is plain science that you cannot argue with, folks. That energy flows through the entirety of creation and expands, includes. What appears to be solid matter, when looked at truly and scientifically, is nothing but energy. It is simply a matter of convention as to what we call that energy, what we name it. But rest assured, all of what you detect with your eyes and with senses yet to be fully developed is energy, plain and simple.

In Part Two, we reminded that we’ve placed different definitions of energy along something conveniently called the electromagnetic spectrum. A type of energy earns its place there only after we’ve gotten smart enough to learn how to measure, quantify it. That does not mean the energy didn’t exist before we knew how to measure it. It only means we didn’t know how.

Science has learned how to quantify energy up to the level of cosmic rays. But there is more. At least common sense would predict that. And that next level of energy, a higher format if you will, is only now being measured and defined. That level is the energy loosely defined as thought.

It is pretty clear that thought is an energy format. Its results can be observed. Its effects can be directed. It appears we are only very sloppy in using it. On its deepest level, thought controls bodily function in a very real way. Research at Duke University decades ago found that negative thoughts resulted in constricted blood flow in heart arteries, just to cite one example. That happens on the subconscious level but can be accessed consciously. So let’s carry forward with this idea that thought is a creative energy and how that plays into the manifestation of what we know as “matter.”

Fear Thoughts It is often said that there are truly only two emotions: Love and fear. Subheadings and sub-definitions are simply the wandering into details and the “devil’s in the details,” as we know. Human experience and scientific method demonstrates that fear is the emotion that constricts, confines. When entertaining negative, fear thoughts, the body reacts with shutting down non-essential systems. Though certain systems see increased performance (like flow to muscles for fight or flight response) it is at the cost of increased pressure that has an overall negative effect. What’s happening in a negative situation is a blocking of energy. (Interestingly, Eastern martial arts teach not to constrict energy or oppose it when in crisis but to flow with it and direct it in a pliant, flexible manner. Hmmm.)

Consider the amount of energy flowing around you in various ways. There is energy flowing through the electrical wires of the buildings around you. No problem. There is kinetic energy in that three-ton truck rolling down the street several feet from you. No problem. But stick your fingers in the socket on the wall and try to block that electrical energy and you have a problem. Step in front of that truck and block that kinetic energy and you have a problem. When energy flows freely, there is no problem. Blocking energy is the problem.

Fear constricts the flow of energy. That happens on every level. In our bodies, the flow of blood is constricted by fear. Muscles tense up. Nerves are on edge. The same is observed in the way energy interacts in our world of form.

Just as a gross example, consider what happens as water flows down a river. With a clear and open channel, the water, representing a form of energy on a very crude level, flows along. But remember the times you may have seen a log, rock or tree branch get stuck in the river, in a sense blocking the flow of energy. What happens? Sure enough, around and behind that branch, more solid stuff accretes. Pretty soon that blockage of energy is resulting in the formation of matter on a larger, more noticeable scale. We end up with a sandbar or even an island. Form is created.

Now that is a simplistic metaphor of the result of blocking energy. As with all metaphors or analogies, it begs argument and contradiction. That is what the analytical mind wants to do to distract from facing reality. Recognize that all things are energy. Recognize that we as beings are entirely energy. Learning how to let go of the blocks to the flow of that energy is a simple and easy task we recoil from because we attach to the world of form. Wasn’t there a guy long ago who walked the Earth exhorting us to let go of investment in worldly belongings? Hasn’t there been a multitude of poets, writers, wisemen, gurus and teachers who advise releasing the world of form and “going with the flow”? Isn’t that flow they are talking about energy? And if blocking that energy causes form, how then is this world we see anything but the manifestation of fear, the thought that blocks and manifests matter? Letting go of fear is letting go of form. Conversely, letting go of form is letting go of fear. Letting go of fear is healthy.

Heartland Healing is a metaphysically based polemic describing alternatives to conventional methods of healing the body, mind and planet. It is provided as information and entertainment, certainly not medical advice. Important to remember and pass on to others: for a weekly dose of Heartland Healing, visit HeartlandHealing.com.
2019.10.08