Home » Heartland Healing » Water: Is You In It? 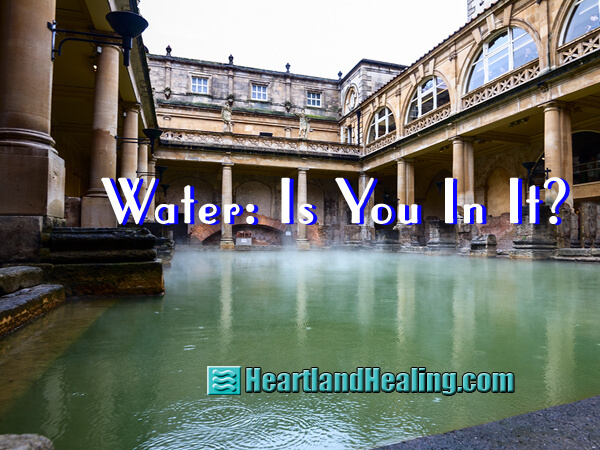 Renault: “And you, Rick. What brought you to Casablanca?”

Rick: “My health; I came to Casablanca for the waters.”

Renault: “The waters? What waters? We’re in the desert.”

Rick: “I was misinformed.”

That classic exchange between Captain Renault and Rick Blaine in the 1942 film Casablanca is a favorite. Rick’s allusion to “health” and “the waters,” illustrates mankind’s longtime relationship with what is truly the elixir of life.

Toga Party. Around the world, population centers have formed around the larger natural geothermal pools and springs. On the northern Japanese island of Hokkaido, even indigenous simians have been known to “take the waters”. Bathing in the warm waters of the Ganges remains a religious experience for India’s Hindus. Ruins dating to 3000 B.C. in what is now Pakistan, show that public baths were built both for hygiene and for therapy. Finally, it was the Romans who perfected the construction of the greatest public baths in history.

By 50 B.C., nearly every Roman town or city had public baths; complexes that rivaled our present day shopping malls. Some baths in Rome could accommodate thousands. The Diocletian could hold 6000 bathers at once.

So obsessed with bathing were the Roman Emperors, that each would build grander and more spectacular thermae to outdo their predecessors. To make sure the public shared in their self-adulation, the entrance fee, if any, was kept to a minimum.

Smaller baths known as balnea were built in metropolitan neighborhoods. By the time of Agrippa in 60 B.C. there was an average of one balnea per every five blocks in Rome; not exactly indoor plumbing but pretty civilized. Balnea were not as extensive as the ornate and complex thermae but they got the job done.

The thermae were technological marvels. Two developments allowed them to succeed. First, Roman architects perfected the vaulted ceiling, allowing erection of such mammoth buildings. The second was the application of the technology known as hypocaust heating.

With hypocaust furnaces, hot air was forced into spaces under the floors and through the walls of the baths. The marble surfaces spread heat evenly and effectively, raising the ambient air temperature in the ducts to around 210° F. Water supplies entered the baths through aqueduct systems large enough for a man on horseback to ride through them to inspect for leaks. Romans used special footwear to allow them to walk on the heated floors.

Many of the larger Roman bathhouses remain as archeological sites. The one at Pompeii is so well preserved that the opening day invitation plaque is still readable today: “There will be a dedication of the baths and the public is promised a slaughter of wild beasts, athletics, awnings to shade the sun, and perfumed sprinklings.”

Natural healing with water. Minerals in the waters and immersion in water have been shown to be therapeutic for a number of ailments ranging from hypertension to liver disease. The names of some cities throughout the world have become synonymous with the restorative powers of water. About 860 B.C., an English leper found cure in the springs of the Avon River. The settlement that sprung up became known as the village of Bath. The extensive spa there has recently been restored and operates today.

Germany has Baden-Baden (also the location of a Roman bathhouse). There is St. Moritz in Switzerland and Bormio in Italy. Vichy in France and Karlovy Vary in the Czech Republic are well known. In this country we have Hot Springs, Ark. and Sarasota Springs, N.Y. Finland has more heated baths than automobiles but the place that has given its name to the whole idea is the city of Spa in Belgium.

Roman historian Pliny the Elder wrote of Spa, “Near Gaul, there is a famous fountain that sparkles with bubbles.” The present-day city maintains a series of baths and springs of various nature, some naturally bubbly, some high in minerals, some heated and some cold. The water is exported nearly as much as the name. Indeed, the effervescent ferruginous waters of Spa have lent their pedigree to mean the very idea of watery therapy or pleasures.

In America, we use the word “spa” broadly. By adding the word “day” in front, we signify a place where some services usually associated with a spa are available without need of an overnight stay. A day spa often offers facials, massage, mud baths, pedicures, manicures and more without the single item that made Spa a household word: the healing waters. Perhaps it’s time for a return.