Home » Heartland Healing » You, Too, Can be a Luddite 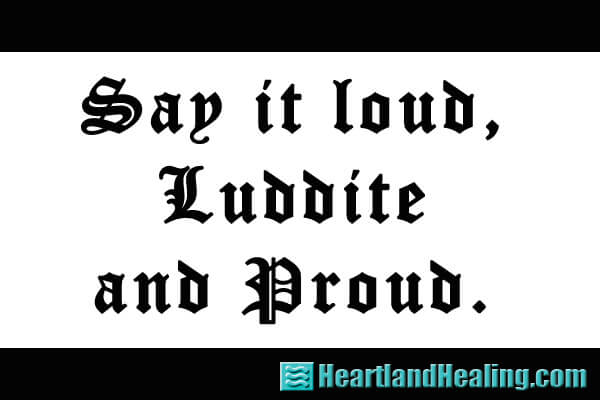 Yet, Luddite carries a social stigma artificially etched on it since the days Ned Ludd roamed the English countryside 240 years ago. Politicians, industrialists, — even paid cronies and misguided miscreants,— rail against any who take the side of nature and humanity against technology and scientific “progress.”

Since C.P. Snow’s treatise, “The Two Cultures and the Scientific Revolution,” little margin has been left for the stated intent of the original Luddites. Snow promoted a modernized and biased position described by Thomas Pynchon as “an opportunity to characterize those with whom they disagree as both politically reactionary and anti-capitalist.” Those descriptions used to be an insult unto themselves but being a rioter and being anti-capitalist seem to be acceptable these days. Still, calling someone a Luddite implies they are a technophobe and is a term leveled with contempt toward anyone who dares question the march of technology.

Evolution or De-evolution? I’m not actually a true Luddite. I am not anti-technology at all. Anyone who knows my history in the recording industry would agree. It’s just that I endorse the Joseph Chilton Pearce litmus test. Pearce wrote in Evolution’s End that it is not as simple as labeling technology as bad or good. Society, driven by profit motive, has lost its guidance Pearce writes. The intellect “manipulates its environment without concern for, or the foresight to determine the consequences of, its impulsive invention. Intellect looks through its tunnel vision and asks only Is it possible?, and creates disaster.” Intelligence, a different quality from intellect, asks a different question: Is it appropriate? The appropriateness of technological advances is the question the true Luddite asks.

From knitting frames to mainframes.  Legend places Ned Ludd near Leicester, England in 1789. An incident that resulted in his bashing two mechanical knitting frames to pieces was seized upon as symbolic by an 1811 political movement. Calling themselves “Luddites,” activists smashed textile machines in factories to protest the mechanization that was taking away their jobs. The movement eventually was thwarted by the Crown. But the term lived on and was used to describe anyone who opposed technological advances. The blanket use became pejorative and included the allusion of unreasonable fear.

Looking at history though, it may be more than reasonable to be skeptical of technology. Countless are the times that technological advances applied without concern for impact over the long haul have risen up to bite us in the butt, Luddite and technocrat alike.

In our powerful age of information and computer-based data mining, techno-development is at an all-time high. Decoding the DNA secrets of life and mapping genes has given us a tempting target for our manipulative technology. Applying all the information we gather about the inner workings of nature and turning it over to computer-based analysis leaves us with intriguing but questionable inventions. Time and again we see how we have compromised our innate powers by handing them over to technology. Or have you forgotten the sense of panic that you felt when you noticed your iPhone battery was dead or you left your phone somewhere? Would you even be able to work today without the internet?

We develop vaccines for nearly every thing or ailment in human existence but don’t stop to ask whether taking immunity out of the hands of our body’s very capable immune system is actually defeating it in the big picture. We think we can control our environment by one technological advance after another and things get worse instead of better. We miss the big picture and forget the important question.

Yes, it is possible to do such and such. But is it appropriate?

Rise of the neo-Luddite Darn right I’m not giving up my laptop or email! And I love my hybrid car, not so much because of gas mileage but its lack of polluting exhaust. And I’ve got this sweet little box that lets me play music from my iPhone through my stereo into any room I want. But you know what? I’m not going to let myself get dependent on any of it.

So I switched up and actually went to a library to research dates and quotes for this column. I looked at printed pages, not the internet. The worst part of the whole experiment? I had to find books using the library’s computer system rather than catalog cards. Know what? It was slower and there was so much data that came up I had to sort it out.

No. I’m not insulted to be called a Luddite. When technology is ill-advised and carried out just because we can do it without concern for whether we should do it, I’ll stand on the side of the knitting frame smashers, along with heroes ranging from Yoda to those in the Terminator and all who recognize the broken cog.