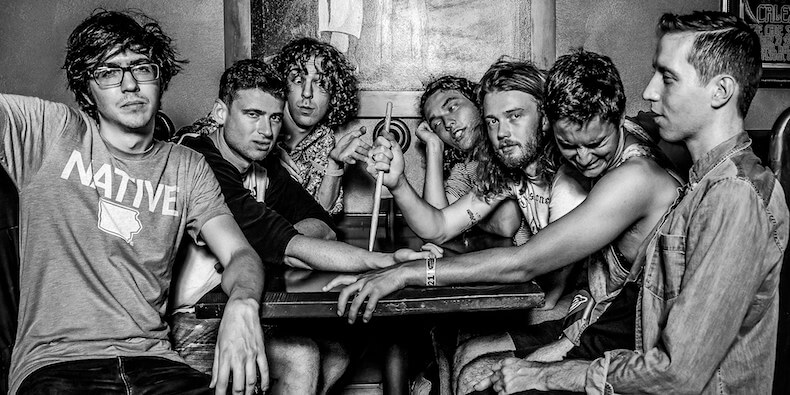 Initially, Will Toledo was not a fan of concerts. “I felt like the album was the supreme way of making and hearing music, and playing those songs live, you were just compromising your vision to try and sell it,” he writes in an email. Fast forward a couple of years and the 26-year-old singer and creative force behind Car Seat Headrest is set to release a live album recorded over the span of an extremely well-received tour. So what changed?

“It took seeing some really special things live to change my mind about that,” Toledo says. “I saw Swans live, and that changed how I thought about it. I saw James Brown videos, and that changed me even more. I realized that it wasn’t just about putting the songs onstage. It was a whole different experience that you couldn’t replicate or put on an album …  We’ve taken the task seriously, which would help distinguish us from bands who don’t really care about the live aspect.”

Below, the prolific frontman talks about the process of making a live record for the first time, the music hype cycle, and how he spends his free time.

You just announced a new live album called Commit Yourself Completely. Can you tell me why you thought it was the right time to release a live record?

We’re just about to go on tour and it’s going to be our last tour with Naked Giants, who have been playing in our band as well as opening for us since we started touring for Twin Fantasy. They’ve been touring full time for over a year, doing their own shows when they weren’t on the road with us, and now they’re going to take some time for whatever they want to do next, which is the right choice. We’ve had a great run together and I’m glad it lasted as long as it did. We were able to accomplish a lot as a seven-piece that would have been impossible otherwise. After this tour we’re going to go back to just being Car Seat Headrest and see where that takes us. It made sense to release a record of what we’ve been doing for the past year before we move on to the next thing.

The press release for this record said you picked the songs based on the fun you had performing them versus the best performances. Do you think the folks listening can tell when a band is really enjoying itself?

When you get good at doing shows, you can kind of fake it and make people think you’re having fun when really it’s a drag onstage. And faking it is its own sort of fun, so if you’re good at it, no one will worry about whether you’re enjoying yourself. I think that kind of worry can really bring down a show if people feel oppressed from having fun because they don’t think the band is into it, and the band is waiting for the audience to stop being so reserved. You have to learn that a lot of performing really is about trying to create that carefree energy without forcing it. The shows that are the most fun are the ones where everyone starts out on that page to begin with, band and audience. You just walk onstage and it’s good right off the bat. It’s impossible to predict that or engineer it; it just happens. That’s what these shows were like. Actually, a lot of times those kinds of shows end up sounding worse when you listen to them later, because you were having too much fun and you stopped focusing on the music. But these shows didn’t turn out like that, luckily.

Are there any live records that you listened to for inspiration when putting the album together?

I listened to a lot because I really didn’t know what it should sound like. I’ve never been in the crowd for one of our own shows, so I couldn’t recreate that experience, and that wasn’t what I was interested in anyway. I was interested in taking the recordings we had and trying to retain their energy in the final mix. I listened a lot to Nirvana’s From the Muddy Banks of the Wishkah when I was younger, and I checked out Cheap Trick’s At Budokan during the mixing process. I really liked the energy of those albums, but the sound was very washed out, more focused on the live atmosphere than on the performances of the individual members. I felt like the instrumental work on the recordings we’d made were a large part of what made them special, so I didn’t want to diminish that with a muddier mix. I actually got pretty dispirited from working on it for a while, because I couldn’t figure out how I wanted it to sound. But then I listened to some live records from different genres and got inspired again. I put on Miles Davis’ Live-Evil for the first time, and I thought it was the best-sounding record I’d ever heard. Of course, on jazz records, everything is presented just the way the musicians played it, very clean, so you can hear the interplay. I thought that was great because it brought the energy of the show into the room — you weren’t imagining you were there, you were there, wherever that music was being created, because it was the same exact sounds. So I listened to a lot of live jazz while I was finishing the record, and a lot of James Brown performances — anything that was straightforward, clean mixes.

As someone who is considered to be a very prolific songwriter, there’s been a three-year gap since your last full release of new material. In today’s musical landscape that can feel like an eternity. Do you ever worry about falling out of the collective consciousness?

People need to forget bands before they can remember them again, so it seems like everything is going OK. I can’t keep up with the hype, and I needed to feel like a normal person for a while, so we just toured a reasonable amount for Twin Fantasy and didn’t do much of any press around it. Now I feel like it’s been long enough that I can get back into it, so we’re gearing up for a real-deal album cycle once we’re finished recording the new album, which is happening now. I operated for five years outside the modern musical landscape when I was releasing Car Seat Headrest records independently. I’m still pretty noncommittal about the way a lot of things are done inside the music industry, although I’ll try anything once.

As someone who rose to prominence on Bandcamp, do you miss the days of being able to create something and post it without a second thought?

Yeah, but I don’t miss waiting for days for a single response from anyone after finishing what I think is my best work ever and immediately posting it. Actually, that happened after I finished this live record. I marathoned my way through the last two weeks of mixing and finally got it done and sent it out to five or six friends to try and get reactions. I got one vote of approval from my best friend, and nobody else cared. So that was a nice blast from the past. I miss the idea of immediate gratification, but that wasn’t something that ever actually happened, so I’d rather just have real gratification, which comes from having people listen to your music. I’d like to make that happen however I can.

Besides touring and re-recording Twin Fantasy, what have you been doing with your time?

I’ve been getting sick a lot. Somebody always comes down with something during a tour, and it goes around and usually gets to me right at the end of the tour, so I go home sick. We played one show in May and me and Andrew both got sick for like 10 days afterward. I went to his house at the end of it to work on the live record, and I was coughing and blowing my nose, and he was like “Oh yeah, I’ve been in bed for a week.” But when I’m home and I’m not sick, I’m always working on something. Right now, I’m trying to finish up producing a friend’s record, and working on material for our own record.

What’s the last album you formed a real relationship with?

I guess it’d still be Blonde. There have been good records since then, but none that have hit that hard. It was something where I listened and went, “This is cool. There is something not normal about this record. I’m going to have to listen to it more to figure out what’s going on.” And I kept listening and it completely caught me up in its world, which I still haven’t really figured out, but it’s so deep and expansive that I never got tired of it. It was crafted in a way that most albums these days are not crafted. There are the songs, but there’s also the way it’s built out of a thousand little pieces, assembled in a way that no one else could ever replicate or envision. Albums are like places to me; they have to invite you in, and they have to have something inside that is navigable and unique. There aren’t enough albums you can really walk around in, but Blonde is one of them.