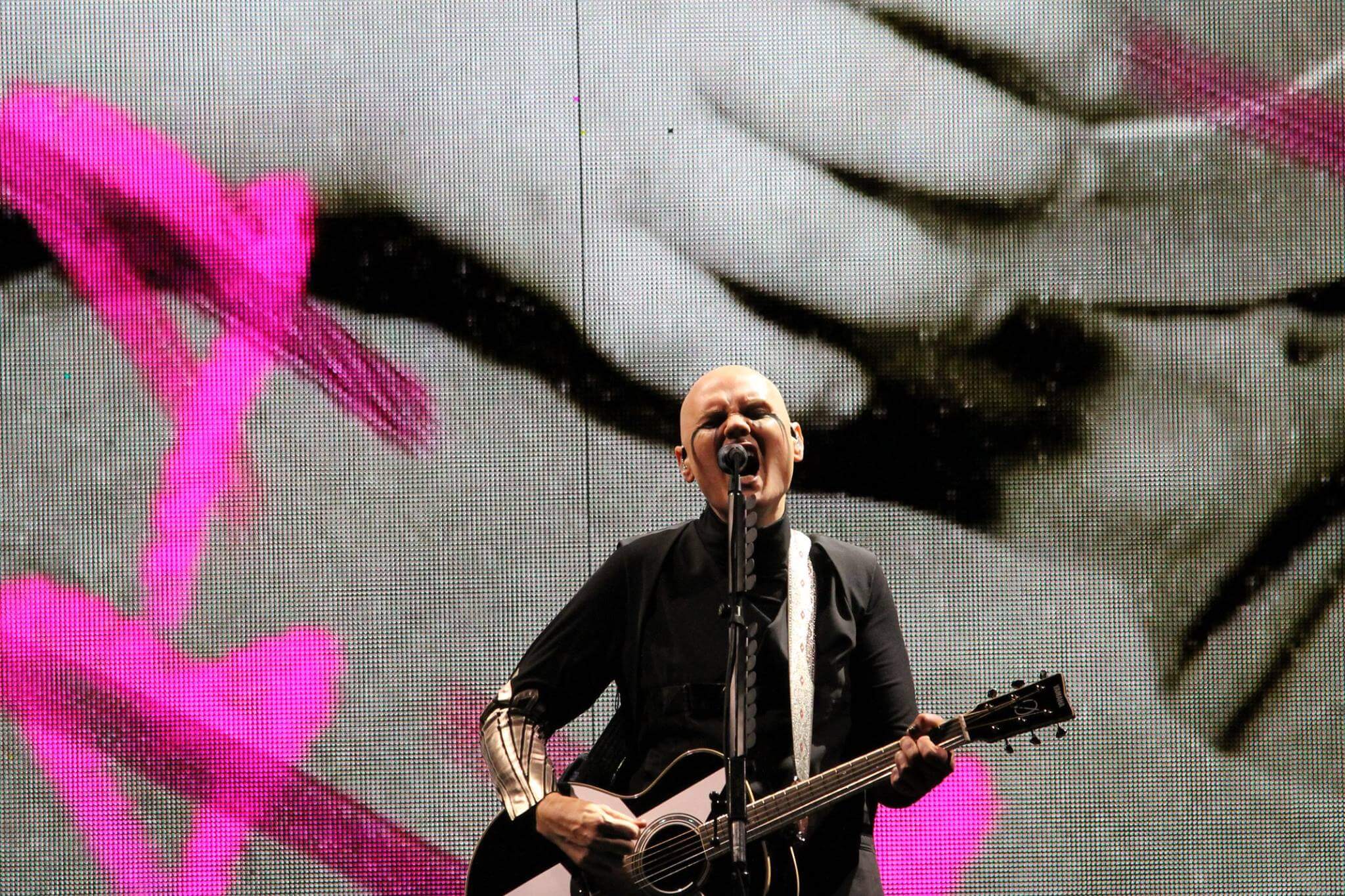 Nostalgia was a hot commodity at the start of the decade. Bands like Pavement and Soundgarden were reforming to tour behind old glories and cash the massive paychecks that came along with doing so. At the same time, Smashing Pumpkins’ frontman Billy Corgan wasn’t having any of it. He was still releasing new music as the Pumpkins and touring with a rotating cast of musicians that included everyone from the singer/bassist of Tinker (look them up) to a 19-year-old drumming prodigy, and he was clear that he wouldn’t be cashing in on the reunion tour feeding frenzy anytime soon.

“If I walked onstage tonight and there were 20 people out there, I [still wouldn’t] go back and like ring up anybody that used to be in the band. That’s it. It’s over,” he told Rolling Stone back in 2010. “I will never, ever, be that guy. And I’ve said a lot of things that I’ve gone back on, but I can guarantee you I will never be that guy. It’s just not in my DNA.” Yet here we are.

For Monday night’s show at the CenturyLink Center, the gang was (almost) all there. While original bassist D’arcy Wretzky was notably absent — due to a rift between her Corgan that has yet to fully heal — original drummer Jimmy Chamberlin and original guitarist James Iha were in tow along with guitarist Jeff Schroeder and a pair of backing musicians on bass and keys.

Make no mistake though, this was Corgan’s show. He was the only member to feature in the videos that played during the show (although Sugar Ray’s Mark McGrath did appear for a number of strange interludes), the opening montage that went along with “Disarm” included his childhood pictures, and several times throughout the show he found himself perched above the band on platforms that were constructed exclusively for his use. There was even a statue of Corgan as some sort of saint that the roadies were made to carry around like it was the festival of San Gennaro in the Godfather II.

It didn’t feel like a reuniting of old friends but it didn’t feel like a straight cash grab either. If anything, it was almost like Corgan hired an expensive backing band, which is basically what he has considered most of the musicians in the Pumpkins to be anyway.

The lineup wasn’t the only thing that was familiar though, the setlist was too. The last time Corgan was in Omaha — for a 2011 show at the Slowdown — he leaned on what was then the band’s newest material a little heavier than what some fans were expecting. For Monday night’s show though, it was nothing but the classics.

I use career-spanning a lot when describing stadium shows but in this case, no other words will suffice. Not only did the band play a litany of hits including “1979,” “Cherub Rock,” and “Tonight, Tonight,” but they also included a number of deep cuts as well. There was an elongated version of “Porcelina of the Vast Ocean” that felt truly monumental when the first Sabbath-sized chords erupted after the two-and-a-half minutes of guitar noodling that open the song. Watching Corgan prowl the stage during the electronic-indebted sleaze of “Ava Adore” was equal parts embarrassing and amazing. James Iha even got to perform his gentle ballad “Blew Away” from Pisces Iscariot. The Pumpkins have never been known for their restraint and the setlist really reflected that by going all out. While the majority of the crowd undoubtedly enjoyed the hits more than anything else, it was nice that the band showed a little love to every part of their discography.

They also treated fans to covers from a trio of classic rocks icons. There was a hard-rocking version of Bowie’s “Space Oddity,” a piano-driven rendition of “Stairway to Heaven,” and Corgan’s classic cover of Fleetwood Mac’s “Landslide.”

For me though, it was the fan-favorites that took the cake. Seeing folks sing along to the opening notes of “Mayonaise” or belting out the lyrics to “Drown” was something special. That’s when you look around the stadium to see people really connecting with a song and a band that shaped their lives some way, however small that might have been.

So sure, Billy Corgan is a bit of a hypocrite. And a megalomaniac. And a ham. And an attention whore. And he still doesn’t seem to respect anyone in the band that isn’t Jimmy Chamberlin. And if I’m really picking nits the show probably could have cut out about five or six songs. It was decadent and overblown and weird all at the same time — just like the Pumpkin’s music. And that’s exactly what made it perfect.