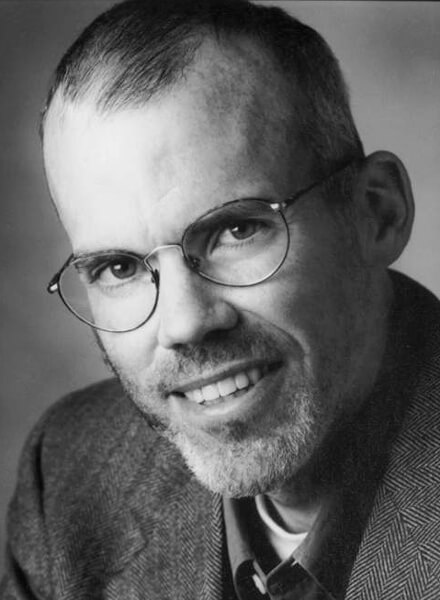 Bill McKibben, one of the world’s leading activists on climate change, is in Atlanta two days before Thanksgiving. He’s been on the road with his Do the Math tour since the day after Election Day, riding around the country in a bio-diesel bus that used to be Mary J. Blige’s tour bus.

“Our driver was Johnny Cash’s driver, so we’ve heard a lot of good stories on this trip,” he quips. McKibben has done 12 shows in 12 days, traveling down the west and east coasts and he sounds tired, but hopeful. “The reactions have been huge. People are coming together around the basic climate message everywhere we go.”

BOLD Nebraska is bringing McKibben’s tour to the Joslyn Art Museum on Dec. 1 at 7 p.m. Part TED talk, concert and An Inconvenient Truth all in one evening, McKibben has lectured to sold-out crowds.

Pitching his idea that universities and municipalities should divest from investments in oil companies, similar to the anti-Apartheid divestment movement of the 1980s, he sees it as a way to force Big Oil to take climate change seriously- by going after their money and their image. In a Rolling Stone article this summer titled “Global Warming’s Terrifying New Math,” McKibben wrote, “It has become a rogue industry, reckless like no other force on Earth. It is Public Enemy Number One to the survival of our planetary civilization.”

In activism, protesting in the street is called an “outside strategy.” McKibben has turned to it because the “inside strategy” of working within the political process has accomplished nothing. In 1989, he authored the first book written for a general audience explaining the dangers of greenhouse gas emissions. In the 20 years since The End of Nature was published, Congress and the White House have enacted no significant policies to tackle the problem, though a few politicians have worked hard on the issue, including members of the Congressional delegation of Vermont, McKibben’s current home state. When asked to name his Republican supporters in Congress, he admitted he had none. “They seem united, ready to do the bidding of the fossil fuel industry no matter what.”

Understanding climate change requires understanding a few numbers- three of them come from scientists and one from financial analysts.

The first number is 350 parts per million. That’s how much carbon dioxide scientists generally agree the atmosphere can safely hold. To raise awareness of this number, McKibben founded an organization called 350.org. Its website states, “Since the beginning of human civilization up until about 200 years ago, our atmosphere contained about 275 parts per million of carbon dioxide.” That current concentration is now at 392 ppm and continuing to rise.

The second number is 2 degrees Celsius or 3.6 degrees Fahrenheit. That’s how much the 2009 Copenhagen climate conference formally recognized global temperature could increase before it sets in motion irreversible effects. As McKibben wrote in his Rolling Stone article, “We’ve raised the average temperature of the planet just under 0.8 degrees Celsius. A third of summer sea ice in the Arctic is gone, the oceans are 30 percent more acidic, and the atmosphere over the oceans is a shocking five percent wetter, loading the dice for devastating floods.”

The third number is 565 gigatons. According to McKibben, “Scientists estimate humans can pour 565 more gigatons of carbon dioxide into the atmosphere by midcentury and still have some reasonable hope of staying below two degrees.”

The fourth- and possibly most important number- is 2,795 gigatons. It comes from the Carbon Tracker Initiative, a team of London financial analysts and environmentalists. It is the amount of carbon already contained in the coal and oil and gas reserves of the fossil-fuel companies and oil producing countries. It represents the carbon they have on the books that they plan to burn. Their future profits depend on burning all 2,795 gigtatons of their reserves. But, that is five times the amount that can safely be burned to keep the planet from warming beyond 2 degrees Celcius.

That is the problem in a nutshell. The richest industry in the history of the planet does not want to stop doing business as usual. Politicians do not want to take a heavy hand to force the issue. And no significant political movement has inspired people to take to the streets to demand that things change.

But then came the Keystone XL pipeline. Owned by Canadian corporation Transcanada, it is supposed to carry tar sands oil from Alberta to refineries in Houston, Texas, including a refinery owned, in part, by Saudi Arabia. Transcanada built the first Keystone pipeline in 2008 without anyone really noticing. The company claims to need a second pipeline, though the first one is not running at full capacity. In order to save construction costs, they asked to take a shortcut across the Ogallala aquifer in the Sand Hills of Nebraska. That’s when Nebraskans woke up, thanks in part to BOLD Nebraska.

Jane Kleeb of Hastings, founder of BOLD, met Bill McKibben in November 2011 when she handled the advance press for the Keystone XL protests at the White House where 12,000 people protested for a week and 1,000 of them got arrested, including McKibben. It was called the largest civil disobedience action in America in decades and it focused the world’s attention on Keystone XL and Nebraska. “He’s one of the rare leaders who works on this big of an issue who gets in the trenches,” Kleeb said.

An experienced political operative, she had never done environmental activism prior to May of 2010 when she went to a meeting in York. “The State Department was doing routine public hearings on the environmental impact statement for the pipeline. I think they expected it to be like the first pipeline where 10 people showed up and they gave the certification a few months later. This time, about 150 people came and 35 spoke against it and had specific reasons why they were opposed to it. One had native prairie grasses on his land. He testified that Transcanada doesn’t have the ability to replant native grasses after they dig up the ground. Another was an organic farmer who said his organic certificate would be gone if it went through his land. They all mentioned the aquifer.  I looked over at my friend Graham Christensen from the Farmer’s Union and said, ‘We have to organize.’”

In the past two years, BOLD has become the advocate for landowners who would be affected by the pipeline. “We had no state policy in Nebraska, no state pipeline agency. We had nowhere for landowners to turn about the threat of eminent domain,” Kleeb said. BOLD formed an organization specifically to help landowners deal with Transcanada, Nebraska Easement Action Team with a website www.nebraskaeasement.org to spread the word on landowner’s rights. Kleeb and McKibben are partners in fighting Keystone. She keeps boots on the ground in Nebraska and McKibben keeps the fight visible to the world outside.

On November 18, four thousand people marched to the White House after McKibben’s lecture in Washington D.C. to remind the president of the public’s opposition to Keystone XL. “They don’t call it Keystone for nothing,” McKibben said on a conference call the next morning. “The further rapid expansion of the tar sands in Canada is dependent on getting Barack Obama to approve this Keystone Pipeline. Slowing the development of that pool of the dirtiest oil on the planet is dependent on getting Barack Obama not to approve this pipeline.”

“Most people deep down realize that the time has come to move on to clean energy. It makes me very optimistic, somehow or other, despite the smart money, we’ll figure out how to keep this pipeline from being built,” McKibben said.

McKibben said his most memorable moment on the Do The Math tour so far was playing to a sold-out crowd at the Orpheum Theater in his hometown of Boston, Mass. “The same theater where I saw the Ramones play in 1978,” he added. That little detail tells you a lot about McKibben. He’s a Harvard grad and best selling author who was recently inducted into the literature section of the American Academy of Arts and Sciences. But, he lives a punk rock sensibility of speaking truth to power, standing with outsiders to aggressively defend the rights of those who don’t have power. When asked if he had ever spoken to his fellow Harvard graduate, President Obama, McKibben said, “We communicate in other ways. Getting arrested outside the White House is a pretty clear way of sending a message.”

When the Do The Math tour is over, McKibben will get ready for the next event. On President’s Day, Feb. 18, 2013, there will be a third Keystone XL protest in front of the White House to send yet another message to the president. As he wrote in his Rolling Stone article, “The more carefully you do the math, the more thoroughly you realize that this is, at bottom, a moral issue: we have met the enemy and they is Shell.”