The killing of George Floyd at the hands of four Minneapolis police officers on May 25 sparked a revolution that has now raged for more than 100 days. Since that afternoon, thousands of protesters have been brutalized while others have lost their lives to police officers, intensifying the call to defund police departments across the nation.

What that means or looks like is still evolving, but several municipalities have taken a crack at answering the call. In Omaha, the movement in city government died just as quickly as it appeared. Omaha City Council President Chris Jerram introduced a resolution on Aug. 13 aimed at addressing these concerns and re-allocating funds to mental health and workforce development.

On Aug. 18, City Council members shot down the proposed $2 million budget cut, a small offering compared to other cities around the country. Instead the funds for community programs would come from the city’s cash reserve. But even that was vetoed by Mayor Jean Stothert.

Still, protesters aren’t slowed in their mission. If anything it’s just another piece of a narrative that continues to affirm Omaha, and the country, needs alternative solutions to public safety.

“Build those people power institutions that are causing good trouble to this horrible system of exploitation,” said organizer Mark Vondrasek. “That’s the solution, once we get organized and we start to challenge the power of the state… if hundreds or thousands of people started engaging in that type of civil disobedience, we can change the world very quickly.”

While the movement is still nascent in Omaha, protesters in other cities have found greater success in their city governments.

The Minneapolis City Council voted in June to abolish its police department, going so far as to remove the requirement to maintain a police department from the city’s charter. Council members instead proposed to create a “Department of Community Safety and Violence Prevention” which includes a Division of Law Enforcement Services geared toward a “holistic, public health-oriented” approach. However, the move was blocked by the Minneapolis Charter Commission, effectively delaying the initiative to 2021.

Seattle, Washington played out the most extreme experiment in what completely defunding the police would look like. Hundreds of protesters commandeered Seattle Police Department’s East Precinct, setting up a six-block occupied area known as the Capitol Hill Autonomous Zone (CHAZ) or Capital Hill Organized Protest (CHOP). Seattle police completely abandoned the area creating an autonomous zone devoid of any public services such as fire or EMT, which lasted about a month. The CHAZ/CHOP was shut down and cleared out by state and local authorities after several bouts of violence resulting in the deaths of three people, including 19-year-old Horace Lorenzo Anderson who was shot the day after he graduated from a high school equivalent program in the city.

While many have interpreted the call to defund the police as a demand to get rid of police entirely, others have challenged that communities around the nation will always need some form of law enforcement.

To “Defund the police” means reallocating or redirecting funding away from the police department to other government agencies funded by the local municipality, according to Rashawn Ray, Associate Professor of Sociology and Executive Director of the Lab for Applied Social Science Research (LASSR) at the University of Maryland. 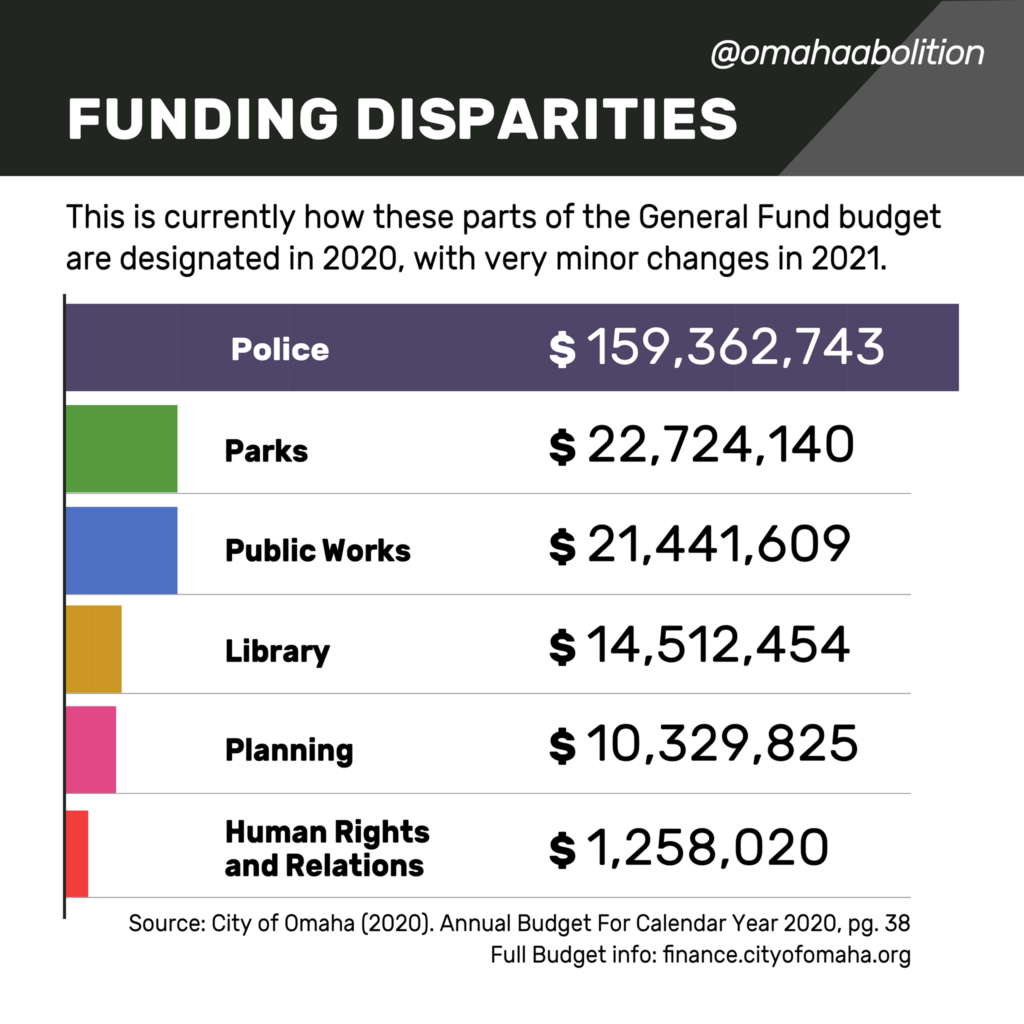 In Omaha, the police department accounts for almost 40% of the city’s budget, exceeding every other department’s funding combined, except for the fire department. According to the City’s 2020 Adopted Budget, the Parks and Recreation and Public Works departments have a combined appropriated budget of roughly $45 million. In comparison, Omaha Police—who just received a $2 million raise—has an allocated budget of $161 million.

Organizations like Omaha Abolition Research have called out this disparity and point to purchases like $549,000 on armored vehicles or $689,000 on Mine-Resistant Vehicles as unnecessary expenses. Meanwhile, July was one of the most violent months for Omaha in the last decade. Others have called for a mental health response program similar to CAHOOTS, a partnership between law enforcement and community service providers introduced in Eugene, Oregon.

ProBLAC, Progressive Black-Led Ally Coalition, which has been one of the most vocal proponents for diverting funds from the police, has demanded that the Omaha City Council “reinvest these monies into social programs designed to serve and uplift the people.” The area of mental health, in particular, emerged as the leading concern following the death of Zachary Bearheels, a mentally ill man who was killed during an altercation with four Omaha police officers in 2017. 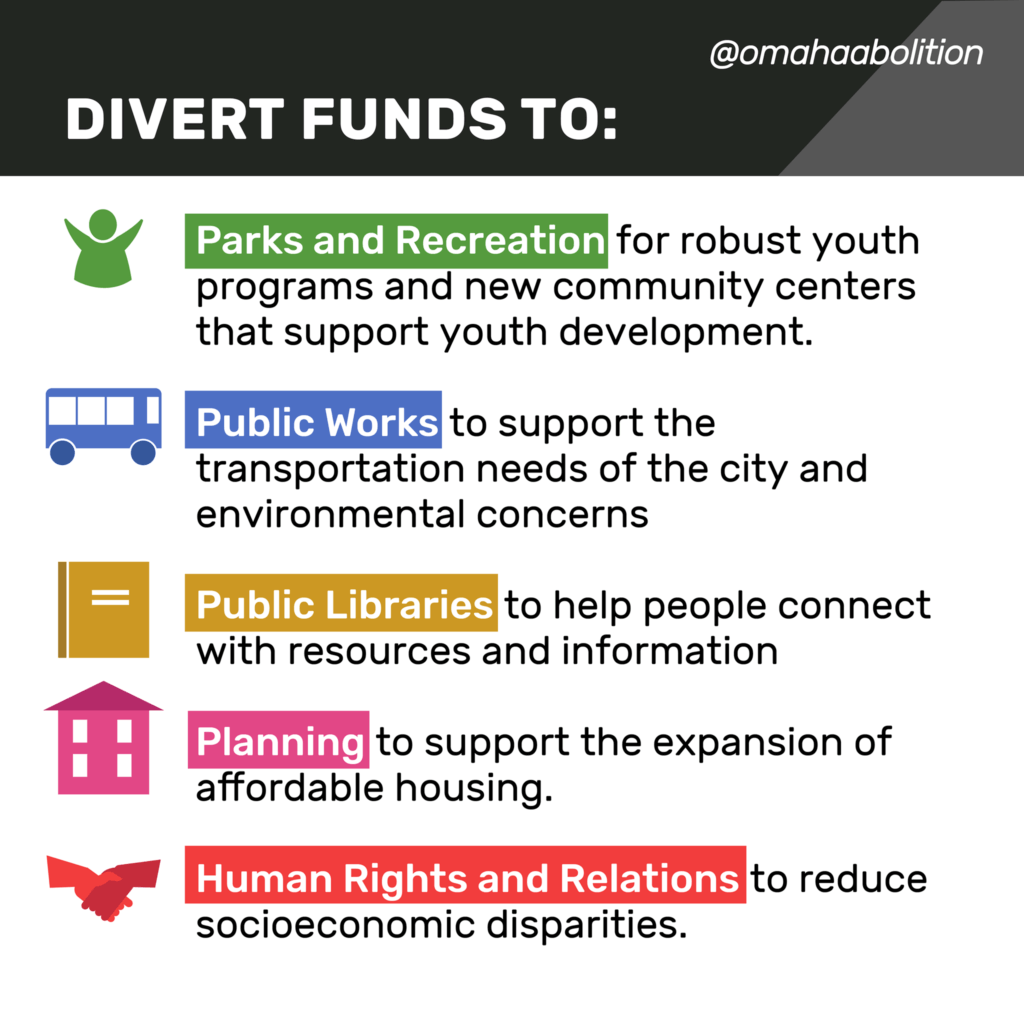 According to Jerram, Omaha police see approximately 15,000 to 20,000 mental health related calls per year. Since Bearheels’ death, Omaha Police has attempted to better address this by adopting a mental health co-responder program, placing a mental health specialist in each police precinct. Still, Councilman Jerram and many other residents question if that is enough.

“That raises the question that a lot of people were testifying to at the budget public hearing and in the emails,” Jerram said on Aug. 18. “Is this what we’re forcing our police officers into becoming, interventionists in mental health crises? Is this really what we want our police doing?”

Councilman Ben Gray, who has worked closely with Omaha police on several reforms and opposed Jerram’s resolution, believes OPD has gotten a “bad rap” and says the need for police is greater now more than ever due to the violence.

“You all read the paper and see the news, or at least I hope you do. We’re in the midst of a gang war. I need all hands on deck including every police officer we can get. We’ve got to stop this violence again,” Gray said on Aug. 18. “We just created a Business Improvement District on North 24th Street, part of the reason for doing that is… for three years we had no violence, no shootings on 24th Street. After COVID now we’ve had four shootings and two deaths on 24th street. It’s gotta stop.”

However, Vondrasek, who has worked closely with ProBLAC on several protests in the last few months, believes the aggression displayed by OPD toward protesters is evidence that OPD does not have the community’s best interest at heart.

Several other Omahans, like OPS teacher Holly Lukasiewicz, believe the council’s failure to pass Jerram’s resolution is evidence that their elected officials are missing the point or aren’t listening. “Underfunding of public services paired with the overfunding of the police shows the city is not putting money towards resources to remedy the need for policing bodies,” said Lukasiewicz.

Omaha resident Chris Sacoman also shared his thoughts during recent public hearings on the issue. “Mayor Stothert stated in June that she would not defund the police, or divest from them, but that she was listening,” Sacoman said. “This budget increase for police officers suggests that she is not.”

Many Omahans have stated they don’t want or need more policing. Dozens of communications in support of defunding the police all point to the need for better public works, better libraries, better planning and a real investment in human rights and relations.

According to Vondrasek, the path forward is paved by the people and organizations like Tenants United and ProBLAC engaging in acts of civil disobedience.