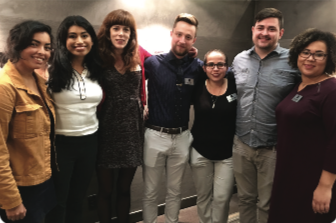 With American civil discourse and liberties under assail, nonprofits are doing civic engagement around voting to get people’s voices heard.

“The current political climate is causing fear among those most vulnerable,” he said. “This climate has also motivated many to be- come more engaged in the voting process as a way to combat that fear. Immigration has recently become more important for Latinos, especially after DACA being under threat and the termination of Temporary Protected Status.

“The recent separation of families at the border and raids in O’Neill, Nebraska, only made this issue more urgent.”

Perennial issues – healthcare, education and the economy – have voters’ attention, too, he added.

“Knowing the challenges and obstacles African-Americans faced to get the right to vote, when things start happening to take the franchise away it’s a red flag or warning call to say we’re going backward instead of for- ward,” said Thomas, social studies curriculum director for Omaha Public Schools. “That’s awakened a lot of people to get active to en- sure we don’t let things slip back.”

Collective outreach, advocacy and impact are by-words in this age of connectivity and networking as energized groups try turn- ing apathy into social action.

Longtime local players in the election arena use various means to reach voters.

“When we launched in 2016 there were only a few nonprofits here that had ever done civic engagement with nonpartisan voter registration–voter turnout,” said NCET Executive Director Zack Burgin.

The Table began with 16 founding members and now has 50-plus. It supports organizations serving historically underrepresented communities or, in voting par- lance, the Rising American Electorate:

“We align our efforts to have a wider net of individuals we can capture, so it’s not just an organization doing a separate, isolated event but all of us collaborating to have a broader outreach with multiple events.”

Fraternity brothers and other partners assist Black Votes Matter in getting voters to the polls on Election Day.

Last April’s North Omaha Political Convention showcased this collective strategy in the lead up to the May primary. Since then, the network’s been at schools, churches and events such as A Taste of North Omaha.

“Our entire theory of change is that non- profit messengers are the most effective voices for civic engagement,” said Burgin.

His organization provides capacity build- ing training, grant funding and how-to tool kits that include, he said, “language tested and effective at increasing voter participation, such as reminding folks to be a voter instead of telling them to vote.”

Resources also instruct how to stay com- pliant with state voter registration rules and laws. Members reach out to voters in myriad ways:

“We make it so organizations can adapt tools for their own work and message.” said Burgin. 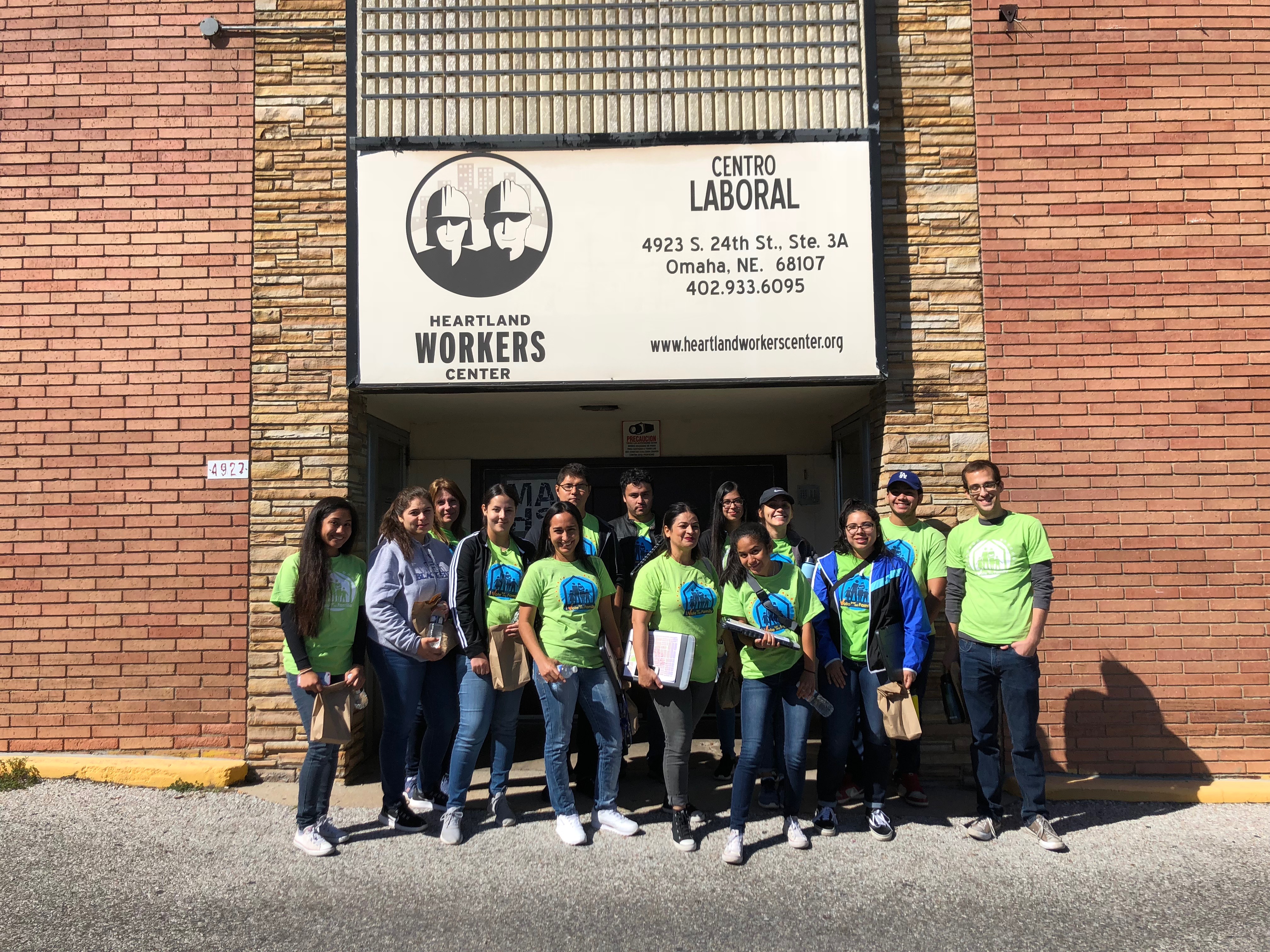 Meanwhile, the Douglas County Election Commission (DCEC) serves as convener and clearinghouse for all things voting and election related. It works closely with The Table and its most active members.

Deputy Commissioner Chris Carithers welcomes all the help his office can get in sharing registration-election deadlines, dates and procedures.

“This year I’ve seen more requests from people to become deputy registrars – the folks authorized to go out and represent our office to register voters – than in 2016, which was a presidential year.”

He said the number of early ballot re- quests is nearly four times that of the last gubernatorial race in 2014.

“Also, our voter registration has topped 350,000 for the first time ever. It tells me a lot of people are interested in voting.”

Barry Thomas reads the same signs. “I’m definitely encouraged by it,” he said. “I’m just hoping no matter what happens in November the people who’ve become engaged, excited, motivated will remain so and not leave this civic engagement on the table. We want to make sure people stay aligned and in tune, so that we can let our voices be heard moving forward.

“I would love to see more young people being a little more attentive and better rep- resented.”

His fraternity partners with its local college-based chapters and with the Black Excellence program at the University of Nebraska at Omaha to reach Gen Z.

“We want to make sure more young people are aware

and active to bring about change for their future. What’s happening today is going to have a longer impact on them than it will on anybody else.”

In his role with Omaha Public Schools, Thomas facilitates a partnership between OPS and the League to register seniors in all American Government classes on Constitution Day.

“We provided American Government teachers voter registration packets resulting in pledges from students to vote and to en- courage their friends and family to vote,” said the League’s Joanna Lindberg. “These students will receive postcard and text remind- ers to vote and utilize our nonpartisan voters guide.”

Krystal Fox, a millennial who does GOTV work through the League and her sorority, Delta Sigma Theta, also wants more young people participating.

“Trying to change that culture is going to be long-term. I think we’re at a good point to do it because a lot of young people are up- set with what happened in the last election.

I definitely feel that pain as well.”

“As soon as I can get you to agree voting is important, then we can go deeper about how you make your deci- sions and where you can go to find

more information about candidates and is- sues.”

Chris Carithers supports diverse GOTV efforts, he said, “because you’re talking to people all across the spectrum about how their vote matters and counts.”

“Some of the groups are left leaning, some are right leaning and some straight down the middle,” he said.

“The more information groups can pro- vide their constituents, then the smoother the election’s going to go, and the more people are going to understand the safety and security of the election.”

Regardless of their leanings, nonprofits conduct very different GOTV efforts than do political parties.

“Nonprofits are doing it for their community,” said NCET’s Zack Burgin. “They’re saying vote for yourself, vote for your family, vote to empower your community – not vote for this agenda or for this specific candidate. These nonprofits are just saying what’s important is your voice regardless of who you vote for.”

Since 2012 Heartland Worker Center has conducted its I Vote for My Family campaign.

“It started in South Omaha and now it’s active in North Omaha, Bellevue, Nebraska City, Schuyler, Columbus Norfolk and Grand Island,” said HWC’s Sergio Sosa. “Our efforts are heavily focused on door to door. We also call people. We’re trying a new strategy called relational organizing that asks a person to list their network of relationships. We contact them several times to remind them to vote. We do also provide information via email and on Twitter, Facebook and Instagram. We’ve partnered with newspapers and radio stations to disseminate our message.

“But canvassing is the most effective strategy.”

Burgin said the strength of nonprofits do- ing GOTV is their “roots and relationships in the communities in which they are experts.”

“They’re there year-round and are going to continue engaging these communities,” he said. “Political campaigns come and go. Non- profits stay – and that’s central to our mission.”

Joanna Lind- berg, who heads the local League of Women Voters GOTV committee, said, “In 2018 we have registered 657 individuals at 84 events with our priority focus on low voter turnout areas of the city.”

The League is also focused on educating prison- ers and ex-offenders about their voting rights.

“We try to hit communities less likely to be targeted by the campaigns,” said League member Krystal Fox.

The League publishes an annual voters guide and it conducts weekly candidate fo- rums on KPAO-TV. It’s also produced videos and handouts in the languages of several Omaha refugee and immigrant communities.

When Chris Carithers talks to groups or neighborhood associations, he often corrects misinformation.

“There’s a perception we don’t count certain ballots. Actually, every ballot that’s cast does get counted if at all possible. There are legal issues that prevent some ballots from being counted but those are very small num- bers. We do everything we can to accept bal- lots. We don’t look for reasons to reject – we look for every reason possible to accept.

“If there are early ballots we can’t accept, Civic Nebraska is one of the groups that helps chase down those voters and explains to them why their ballot wasn’t accepted and what they can do to get it accepted so that we can count it for the election.”

Keeping GOTV players on the same page is part of his job.

“We have a monthly meeting with the stakeholder

groups to take care of any questions or foreseen problems and to help coordinate any election activities, so that people know the rules – what they can and can’t do. We also address how to get a hold of us in case they run into any problems so we can get anything remedied as quickly as possible.”