Tony Conner, president of the Omaha Police Officers Association, fills his Twitter feed with posts about politics, police and protesters.

But the police union president, a 20-year OPD veteran whose organization represents the 902 sworn officers of the Omaha Police Department, also “likes” Tweets that use more graphic language.

“I don’t feel bad for criminals who get shot by the police. And you shouldn’t either,” read one post from Aug. 27 that Conner liked.

“After watching the Jacob Blake footage, I have one thing to say. If you don’t listen to a police officer’s orders, what happens to you is your fault. No matter what color your skin is,” read another from Aug. 24.

One Twitter user shared screenshots of the police union president’s liked Tweets and called them “disgusting,” a tweet which Conner himself liked.

bc his social media presence continues to be disgusting, here is a thread of Tweets liked or retweeted by @opoapresident (omaha police officer association president). for extra fun, check out his page and add your own screenshots! pic.twitter.com/JnoUGjVGPC

Conner did not respond to a request for comment.

Of the Tweets from other users, all from the month of August, that allude to or justify violence, many come from an account run by Damani Felder, a right-leaning Twitter personality. All the Tweets about tension between protesters and police occur in his likes as often as content about sports, local news and posts from the Omaha Police Department and the Omaha Police Officers Association.

Some of the Tweets also show protesters getting violent with police officers.

Conner was elected as Omaha’s police union head in 2018. He is its first Black president.

To Ja Keen Fox, who’s organized protesters since demonstrations began in late May, Conner’s activity on social media is only another sign of the systemic issues present in Omaha’s policing. Fox himself was called out for his social media activity by Stothert in July. The mayor pointed to a July, 2020 tweet from Fox in which he memorialized Texas gunman who shot five Dallas police officers in 2016. She asked Fox to resign from her LGBTQIA+ advisory board.

Conner has power as the union president to negotiate police contracts with the city. Fox sat on an advisory board. He wants to know if Conner will be held to the same standards.

“If you see a leader in this position that has that kind of power that supports this violence,” Fox said, “how can we expect reform when we see that’s the kind of advocacy that’s going on in these negotiations?”

The Tweets come at a time of continued tension around policing in Omaha. Protesters are still demonstrating in the streets even after a push to defund OPD’s $161 million budget by $2 million failed in the Omaha City Council. Police have also mass arrested hundreds of protesters for breaking curfew or failure to disburse. The most recent arrest of more than 120 people led to extended stays in the Douglas County Department of Corrections and accusations of mistreatment by law enforcement 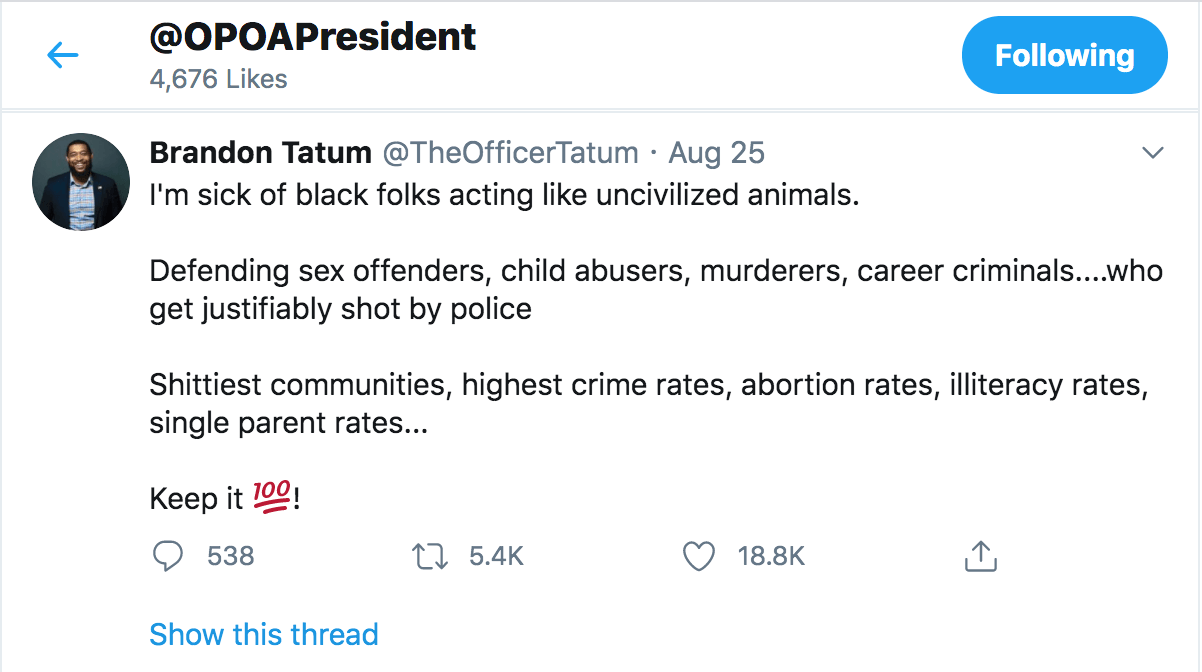 On Aug. 26, Mayor Jean Stothert announced changes to OPD policy on mass arrests. The new policy would require officers to get body camera footage of each person before their arrest, she said. Stothert and OPD Chief Todd Schmaderer also announced changes to OPD police policy in June including formally banning knee-to-neck pins and requiring officers move detained individuals out of prone positions.

Fox said Conner should be held accountable for his social media activity. At the very least, Conner should receive the same, or more, scrutiny Fox did. But as for the effect will have on the larger conversation around policing in Omaha, Fox said this only confirms what marginalized communities, and those that have listened to them, already know. Beyond that, it probably won’t do much, he said.

“This will be passed around by people that care about Black lives,” he said. “But if a murder doesn’t get people to speak out against police violence, I don’t think a leader that espouses the exact rhetoric that got Jacob Blake shot seven times is going to change anything at all.”