Home » News » Over The Edge » The Reality of Living the Dream 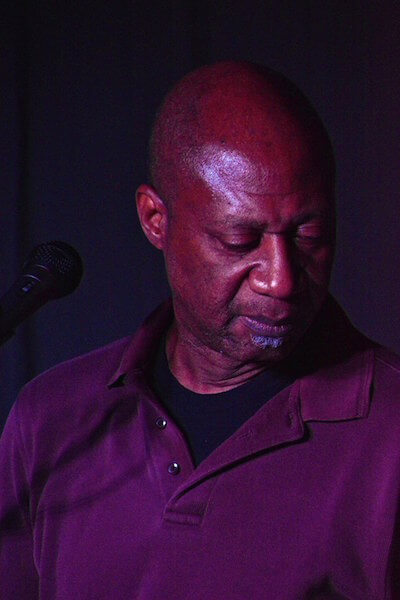 Before you turn the last page on this month’s topic — Work — let me tell you the story of Dereck Higgins, one of the area’s most celebrated and talented musicians and how Higgins’ work shifted from drudgery to art.

First, for those of you who don’t know Dereck, Higgins is a respected bass player and multi-instrumentalist whose body of work stretches back to the ’80s, most notably as a member of Omaha New Wave / post punk band Digital Sex, which gained national attention with an album that came out in 1983. Since then, Higgins has been in a number of bands and continues playing today, both in bands and as a solo musician.

In fact, you may recently have seen Higgins’ handsome visage on the cover of a number of local magazines, the subject of feature articles. And while all of those articles were well-written, the writers left out one important part — the struggle Higgins faces to make a living with his music and art.

Higgins didn’t always make a living this way. Back in 2012 he worked as a licensed mental health specialist at Community Alliance, a local organization that provides support for individuals with mental illness. For 27 years he helped clients overcome some of life’s simplest everyday challenges, such as maintaining a schedule, meeting with doctors, meal planning, just keeping a weekly routine.

It was rewarding work and a steady income, but it also was stressful and frustrating, especially navigating a level of bureaucracy that Higgins said impeded his ability to address people’s needs in a realistic way. More and more often, the end result was tragedy.

So here was Higgins living two lives — one as a respected musician, the other providing community support. It was the classic “day job” model, working 40+ hours a week to support a dream until finally, at the age of 57, Higgins took the plunge and left Community Alliance. I remember reading about it on Facebook and wondered how he could afford to give up a well-paying career for his art.

“It was scary, but the thing was, I ended up in the hospital twice due to stress at my job,” Higgins said while stirring a cup of coffee in the kitchen area of Carver Bank, an art studio and gallery space at 24th and Lake where he would host a workshop later that afternoon. “I made calculations and realized most likely in a couple years I would be out of money, but I had to do it. I told myself, ‘Let me at least have tried to be what it is I want to be, which is a working musician and artist.'”

Giving him the courage to take the leap was the record label he runs out of his home — DVH Recordings. “The success of two limited edition vinyl releases, coupled with having enough money to pay off my house and turning in retirement early, helped me decide to take the risk of leaving the security of a paycheck and try to make the art work,” Higgins said.

Three years later, he’s living a meager lifestyle. “You have to have a bottom line,” he said, “and I’ve gone below it recently. I have to try to maintain enough in the bank to pay my monthly bills and pay the taxes and insurance on my house.”

He does it through a combination of record sales, income from performances and selling his visual art, which consists mainly of intense, colorful collages. After a residency at Carver Bank last year, Higgins had several paying collaborations with artists through the Bemis. “Visual art is something I’ve added,” he said, mentioning that a local business person recently has taken interest in his work.

So he’s getting by, barely. He said his daily diet often consists of coffee, a bagel and a can of soup. “I come from a poor family,” Higgins said. “I’m not used to what most people are used to — which is a full meal or a couple full meals a day. I live on my own and sparsely.”

And there are bumps in the road. Higgins has a channel on YouTube with more than 8,000 subscribers. His videos usually consist of discussions about music, where he talks about his rather voluminous vinyl record collection. In one recent video, however, Higgins showed off his front tooth, which he held in his hand. His smile now has a large gap, and there’s a chance he’ll lose the other front tooth soon.

He shuns Obamacare. “My income is so unsteady, I would have to work to pay for Obamacare as opposed to just working to live,” he said. “To me, (Obamacare) was never about people, it was about the insurance companies.”

Don’t get him started.

After seeing the YouTube video, local artist and film maker Miguel Cedillo launched a GoFundMe campaign to generate funds to meet Higgins’ future dental bills that so far has raised more than $4,000 (Search “Dereck Higgins” at gofundme.com to donate). Depending on the kindness of his rather large network of friends and supporters is part of his life as an artist.

He’s toying with the idea of making his YouTube channel a subscription service. If he needs to, he could sell some excess music equipment. His record collection, however, is off limits. “I could sell records to live, but just because I’m poor doesn’t mean I don’t have the right to enjoy life and have nice things,” he said.

He also has a pending project with the Bemis to work with London artist Di Mainstone on a project that will turn the Bob Kerrey pedestrian bridge into a gigantic harp. And, he sold a couple collages last week, which is always tough because he loves them like his children.

I asked him if he’s happier now than he was working a day job, even though life is more of a financial struggle. “Doesn’t it show in my demeanor?” he asks with a toothless grin. “It’s 2015 and I’m still working as an artist.”

And that’s all he’s ever wanted.