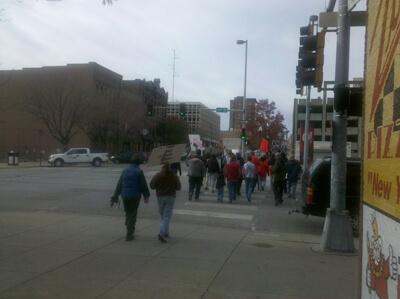 Chris Rock once joked that a man is basically as faithful as his options. The same logic could apply to politics.

Last month, hundreds of Occupy Omaha protesters marched through downtown Omaha. Since then, members have been marching every Saturday at 11 a.m. on Gene Leahy Mall, through the Old Market, to the Federal Reserve building at 24th and Farnam.

But everything from falling temperatures to the tediousness of doing the same activity every week has started to erode at least the physical presence of the Occupy Omaha demonstrators. It didn’t help that at the same time Occupy Omaha was holding its Saturday march at Gene Leahy Mall, kickoff was happening for the Nebraska/Penn State game. It would be ignorant to measure the loyalty of the demonstrators against a football game, but Saturday’s matchup was elevated into the national spotlight in lieu of the horrific sex abuse scandal at Penn State. In short, if you wanted to capture a portrait of the die-hards of the Occupy Omaha movement, Saturday’s protest supplied the canvas.

About 50 protestors showed up at Gene Leahy Mall on Saturday. Among them was Nathaniel Davis, 31, of Omaha. Davis was one of three Occupy Omaha demonstrators arrested November 3 and charged with criminal trespass when they refused to vacate the 24th and Farnam site where they set up a camp site. Benjamin Walden and Kathryn Heil were also arrested when they refused to vacate the area.

Wearing a dark green Operation Enduring Freedom zip-up shirt, Davis said the same reason that propelled him to join the armed forces led him to want to be a part of Occupy Omaha: to protect the country.

“The irony is that the people out protesting the slow and steady demise of this country are more patriotic than the apathetic people sitting at home doing nothing,” Davis said.

Davis is due to appear in court on November 28.If convicted, he could face up to a $500 fine and six months in jail. He said the upcoming court date has not weighed on him.

“I’m hoping the judge will throw it out.”

Mahamed Mahamed, president of the Somali Community Service, repeatedly spoke with the Occupy Omaha protesters when they were using the 24th and Farnam site. Mahamed also works at the Black Sea Restaurant at 2230 Farnam St., where he would sometimes bring out coffee for the demonstrators that were camping out. Mahamed said he supported the general cause of Occupy Wall Street, but he said the group had a mixed message when it came to the richest of Americans. Mahamed said a lot of the Occupy Wall Street message was anti-rich, but he cited Warren Buffet as an individual who was willing to pay more taxes to ensure certain entitlements and critical services do not go away.

“When you generalize, there’re always individuals who will be hurt,” Mahamed said.

Much like the national Occupy Wall Street movement, Occupy Omaha takes great pains to express it’s a leaderless movement. Jim Morrison, who has done interviews with the Omaha World-Herald and KETV, stated his role with Occupy Omaha was as a member of the PR outreach committee of Occupy Omaha, not its spokesman.

“I believe whole-heartedly this is not a party-affiliated movement,” Morrison said.

Morrison said Occupy Omaha is currently working with the city on establishing a permanent central location for the protestors. Morrison hoped once a primary location has been approved, additional satellite locations could also be set up throughout Omaha.

In addition to being a leaderless movement, Occupy Omaha does not have a singular issue uniting demonstrators, at least according to the marchers Saturday. Almost every person interviewed had a different idea about what Occupy Omaha’s main focus should be. Leann Jensen believed campaign finance reform was the biggest issue that should be addressed. Dave Polson, carrying a handheld upside-down flag, said excessive military expenditures was one of the biggest threats to the United States.

Many in the media have tried to equate the Occupy Wall Street movement as the left’s version of the Tea Party. However, Saturday’s demonstration had at least one protestor openly express admiration of radio personality Glenn Beck. While visiting the camp site at 24th and Farnam before it was vacated, at least one person camping declared himself to be a member of the Tea Party. Polson said there were similarities such as concern about government spending that united both causes.

Frances Mendenhall, a dentist who lives in Omaha, was among the marchers on Saturday. Walking up Howard Street through the Old Market, Mendenhall has marched in three Occupy Omaha demonstrations. As chanters shouted “Banks Get Bailed Out, We Got Sold Out,” Mendenhall said she was upset at the city’s decision to vacate the protestors from the 24th and Farnam location.

“Buying elections is free speech, and that’s not?” Mendenhall questioned.