Editor’s Note: This article is a reflection of travels made possible by the Andy Award for International Journalism through the University of Nebraska at Omaha. Both the writer (JoAnna LeFlore) and photographer (Alisha Davis) won the award and visited Jamaica in April this year to attend the Dis Poem Wordz and Agro Festival. Efforts are now in progress to bring the festival to Omaha to be hosted at the Malcolm X Memorial Foundation this Summer.

There are words recited by Mutabaruka, a cherished Jamaican Dub Poet and Activist, a sage if you will, that recite in part about the inadequacies and triumphs of societal warfare. It speaks of the Transatlantic Slave Trade, the influence of power structures and the authenticity of humane struggles who at times are combatting a desire to be consumers rather than creators. It speaks of the ongoing truth about injustice for people of color, yet celebrates the compassion and activism of cultural leaders over time. Titled “Dis Poem,” it can be found recited publicly by Mutabaruka online via Def Poetry (the longtime HBO series hosted by Mos Def).

With Mutabaruka becoming a respected leader during the ‘80s through his radio shows and events, it was no surprise to find out that he was a close mentor to Poet and Food Activist RasTakura. What one poet wrote could not be ignored, but instead carried over, generating a new level of responsibility to bring awareness to the world. “Dis Poem” served as a catalyst to the now eight years young gathering “Dis Poem Wordz and Agro Fest” born by the laboring hands of RasTakura, the next generation of Dub Poetry Social Activism. 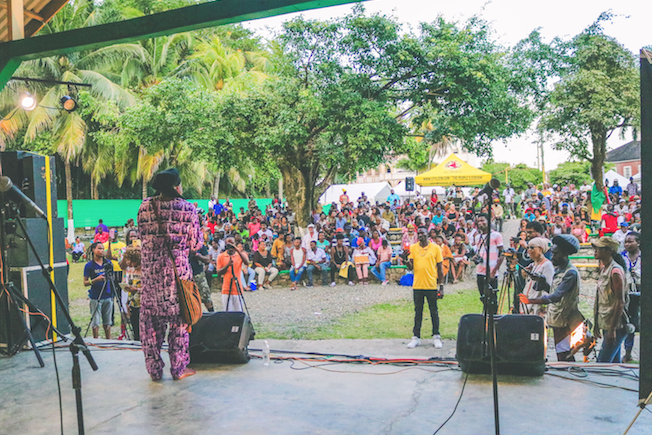 This year, it brought out 700 visitors to engage with 25 performing artists and 32 vendors to celebrate the heritage of food and poetry. Soon, the festival will come to Omaha, hosted by both RasTakura and Wakanda One band members Shomari Huggins and Coleman Hunter, who traveled to Jamaica with myself and photographer Alisha Davis to attend the festival.

“The motivation to start DisPoem Wordz & Agro Festival comes out of the need to create an international stage for contemporary writers like myself who need such medium of expression, for the development of the Poetic environment in Jamaica and the world at large,” RasTakura explained. 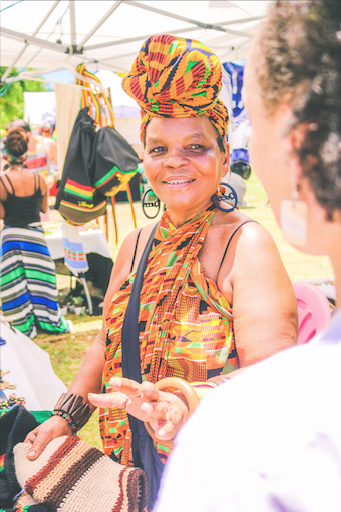 Ras began his career as a Dub Poet while attending the College of Agriculture Science and Education in Port Antonio, Jamaica. He began writing and producing Dub Poetry during his studies to create his first album entitled “Food War,” which was recorded in Trenchtown. Throughout the album, RasTakura mentions the importance of how agriculture helps to sustain nations and help them become self-sufficient. Naturally, the education from life experiences led him to feel a sense of urgency about advocating for food security across Jamaica.

Although Jamaica is flourishing with organic produce, it still faces a mountain of hurdles in regards to farming and building the agricultural economy. There are grocery stores that exist, but the farmers locally have been pressured to comply with economic regulations initiated by the government through the North American Free Trade Agreement. In 1993, this agreement and others claimed to foster aid to caribbean countries but required them to discontinue any efforts to ship goods overseas without financial backing through the International Monetary Fund .

While on tour, RasTakura has been to Omaha a few times in hopes to garner international awareness of the festival and its social justice efforts. His initial appearance encouraged local artists and activists to speak up about food insecurities right here in North Omaha. Among those artists were Egypt McKizia and Wakanda One. Egypt was the initiator for bringing RasTakura to visit the Malcolm X Memorial Foundation in 2016. There he performed singles from “Food War” which inspired Wakanda One to host local health and wellness events around food across the city. 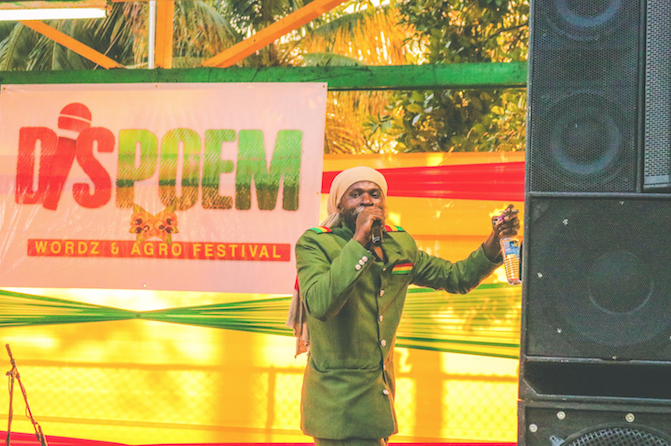 “To me, both food and art are important especially when they are made with love,” Egypt said. “Both provide a deep comfort for me as an artist due to how they stimulate the senses on different levels. Food stimulates taste, smell and emotions; whereas, art stimulates the mind, the ears, the eyes and the emotions as well. Both are profound ways and mechanisms for healing.”

This passion brewed over the next couple of years fostering a mentorship between RasTakura and Wakanda One member Shomari Huggins, who is the lead vocalist of the band. He encouraged the idea to travel to Jamaica and capture the work being done around food and social justice. He knew that it only made sense to bring the inspiration back to North Omaha where its food desert is a common frustration facing the community.

“Omaha has shown the desire for a festival where culture, creativity, and community meet,” Shomari says. 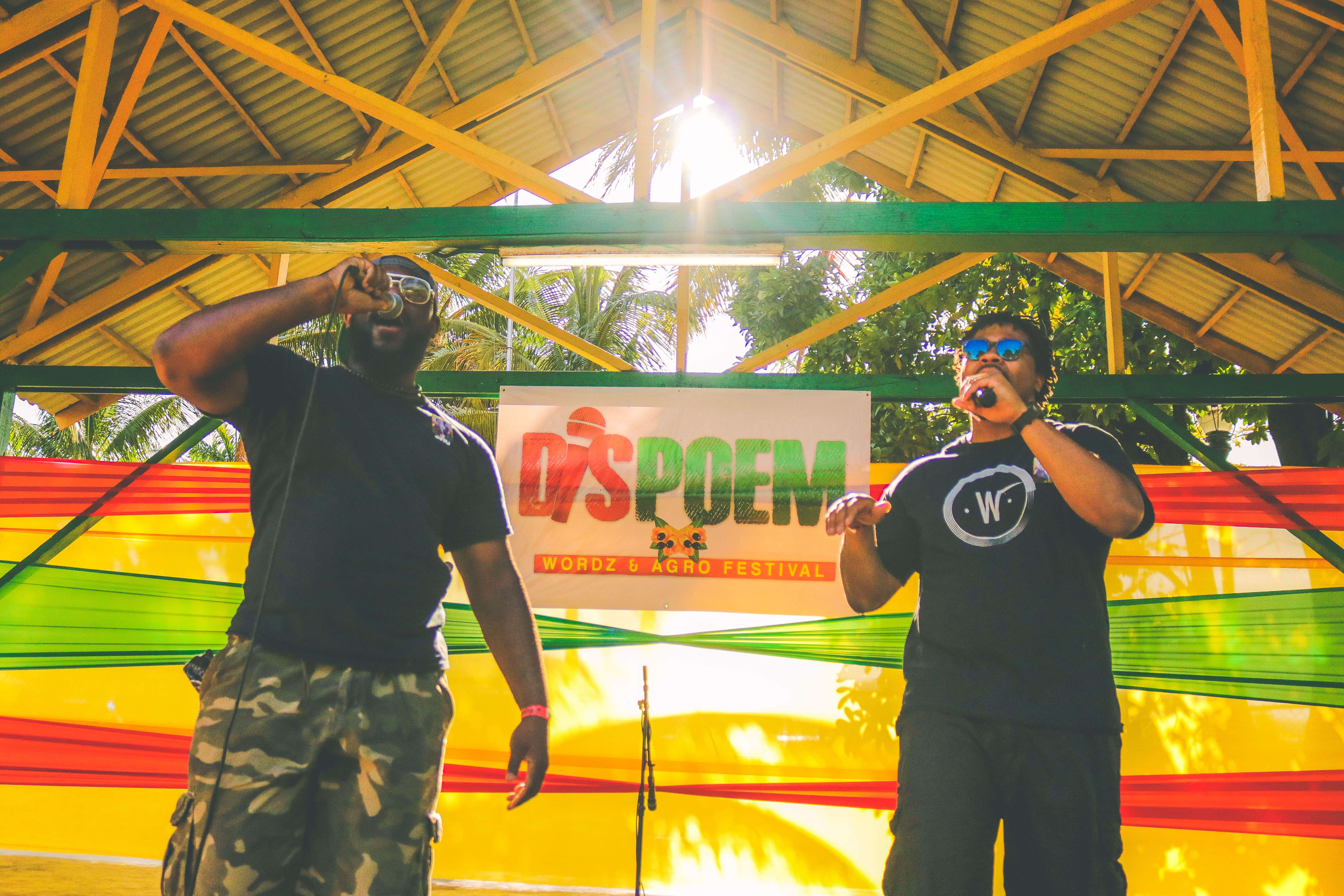 “The Malcolm X Sōl Food + Music festival was born as a community celebration that will certainly fill that void. At this festival people will be able to enjoy homegrown cuisine, artistic expression from locally residing and international artists, all while on the grounds of the historic Malcolm X Memorial Foundation.”

“The organization of this festival intentionally centers around security of nutritious options in the North Omaha community and encouraging positive artistic outlets for our communities youth. We hope it will sharpen the focus of our community around holistic wellness for years to come.”

That passion was definitely evident back in Jamaica. As Wakanda One and the group traveled around Jamaica, with RasTakura as our guide, we got to witness plenty of enthusiasm behind healthy eating and living a lifestyle of wellness throughout the community. We were present for five days both helping to prepare for the Dis Poem fest and, of course, to enjoy Jamaican cuisine.

After flying into Montego Bay, we traveled to Ocho Rios, and Port Antonio before laying to rest in Kingston. All efforts were to grab banners and supplies, while RasTakura did radio interviews via phone to promote the event. The ride was bumpy and fervent. But there was plenty of discovery happening on the streets. From food vendors to beach ports, we all got a taste of Jamaica’s vibrancy on day one simply from the ride to town.

We ate organic fruit for breakfast daily: coconuts, passion fruit, Jamaican mountain apples oranges, papaya, mangos and cantaloupe. It fueled us for the legwork that was needed to help promote and set up for the festival days before. For lunch we had menu options from Mi Hungry Whol’ Some Food, a vegan eatery chain that harnesses dishes from live food only. For dinner we had vegan dishes comprised of hearty beans, leafy green stews and curry flavored roasted vegetables. If you wanted a snack, you could simply look for a banana or mango tree, Or you could walk a few blocks to find a bite from a local vendor. Sometimes the best food was right there on the side of the road. 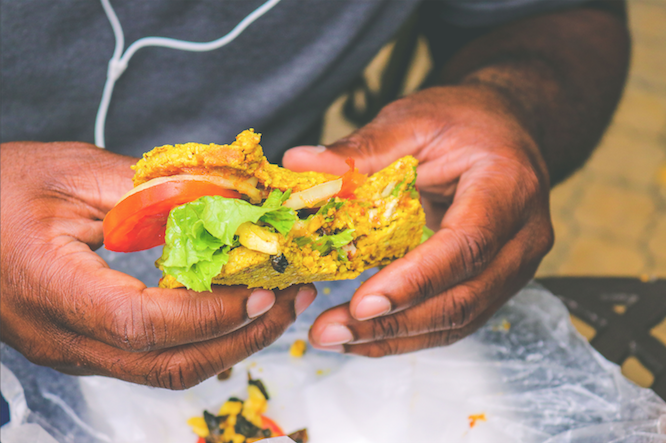 In Jamaica, it is cheap to eat healthy, while in America it is a commonly harsh reality to admit that healthy eating is not always affordable, in fact stressful to maintain for people who live at or below the poverty line. Such circumstances make it necessary to consider events like a seed exchange to help others grow their own produce.

Natalee Hutchings, a Jamaican poet and geologist, was recruited by RasTakura to help with the seed exchange booth in Port Antonio, a new initiative at the festival. Its intent was to encourage visitors to learn about and exchange seeds that may not otherwise be available to them.

“This is the biggest event to get poets together from all over the country and even international. It’s needed definitely once a year if not more than that,” Natalee said. “I think it’s important to keep poetry alive and the culture as well. It goes hand-in-hand with the heirloom seed exchange. In this day and age, with GMO’s and other foods that are not healthy for us, we have to ensure that these things survive. People came here to trade their seeds which is a great thing.” 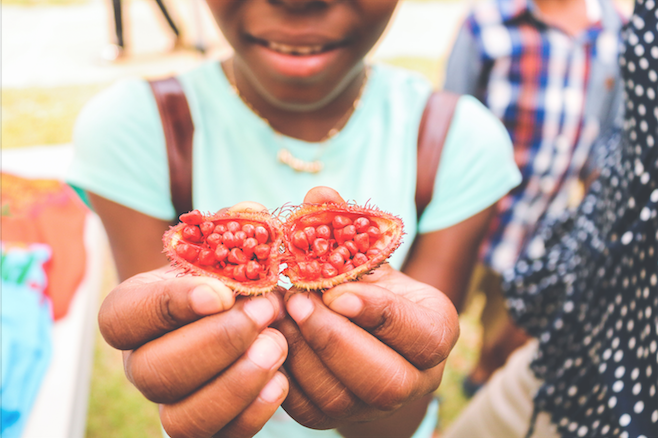 While Natalee and I were at the seed exchange booth, other Jamaican artists excited the stage in addition to a motivational message by Mutabaruka himself. Other featured artists included Bob Andy, Richi Innocent, Delroy Dycr, Dr. Jean Breeze (Recognized as the first female Dub Poet), Steppa, Wakanda One and Tehut-9 (Philadelphia based).

“I feel the festival will give the people of Omaha a chance to expand their horizons when it comes to art and their appreciation of art,” Egypt said. “It will provide a chance for them to see more of the world right in their own backyard!”

Egypt has since been to Jamaica multiple times to record music and will share some of those works at the Malcolm X Sōl Food + Music Fest on August 25, 2018.

Among other performers Egypt will join include local poets and activists who may not have performed on the historic grounds of the Malcolm X Memorial Foundation before. The lineup is still being decided on but more details will be made available online at MalcolmXFoundation.org.

Just as poetry and music can feed the soul, so will the food. Don’t be discouraged if you’ve never had vegan food before. The fest is anticipated to have food vendors on site both of Caribbean and local origins. Aspiring poets, activists and anyone with a healthy appetite of all ages are definitely welcome.