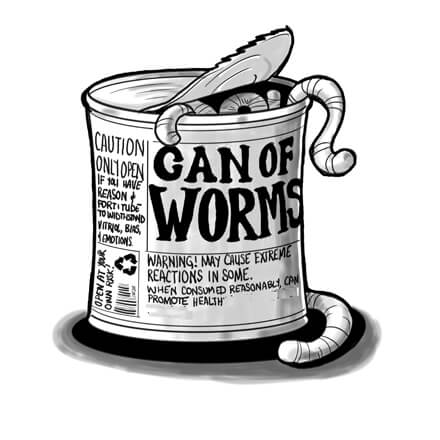 Don’t Squirm. Eat a Worm. Ordinarily, you’d think that having a few internal parasites would be a really bad thing and you’d want to get rid of them as soon as possible, right? Well, if your life depended on them and you were healthier with them in your gut, you might think otherwise. It’s a small segment of the public but there is a growing number who intentionally introduce parasitical worms to the body and find relief from a variety of otherwise untreatable autoimmune diseases.

An autoimmune disease is a real mystery. How can it be that something can trigger the very system designed by evolution and biology to protect us and transform it into our body’s worst nightmare? The immune system is amazingly complex, involving nearly every part of the human body. What we’ve learned recently — as far as that adolescent discipline known as Western medicine is concerned — is that the intestinal tract, all 30-plus feet of it, is the key component in the immune system. That system includes the 100 trillion or so non-human cells that inhabit that anatomical zoo. What species and functions they perform are vital to a healthy and effective immune system. In an autoimmune disease, that immune system goes rogue and utilizes its many defensive weapons in a particularly offensive manner. Cytokines, phagocytes, neurohumors and hormones cause overreaction and often life-threatening conditions. Something untoward but not necessarily dangerous triggers the immune response. Dog dander may cause the bronchi constrict. Milk proteins could shut down the lungs and make the skin erupt in hives. The final result could be fatal anaphylaxis.

The list of autoimmune diseases is long and varied. It contains lupus, Crohn’s Syndrome,  irritable bowel, ulcerative colitis, diabetes, Multiple Sclerosis and dozens more. When it involves specifically the gut, the primary symptom presented is inflammation. From there, it can reach life-threatening proportions. Western medicine has no cure for these diseases and can only modulate some of the symptoms with very little longterm success.

What’s worse is that the Western world is suffering a virtual epidemic of allergy diseases and autoimmune diseases.

Enter the Worm. Back in the late 1980s, a small number of gastroenterologists started to wonder why it was that diseases like ulcerative colitis, Crohn’s and irritable bowel disease are almost non-existent in underdeveloped nations worldwide. Link that with what became known as the “hygiene hypothesis,” the idea that the modernized world is too clean, keeping Western humans from developing properly modulated immune response, and some researchers wondered if introducing some of the third-world problems might be a solution.

Joel Weinstock, now chief of the division of gastroenterology/hepatology at Tufts Medical Center in Boston, struck upon the idea in a moment of reverie. Interviewed on BBC, he said, “Over the years, people had looked for environmental factors that caused inflammatory bowel disease and hadn’t found anything. I decided to play a game and pretend that it’s caused by the loss of something rather than the addition of something.” It was as if “a light suddenly went off”, Weinstock said, as parasites came to mind. Hygiene does wonderful things, he realized, but there’s always a price for change.

Because of our improved hygiene, the idea goes, some things or organisms may be missing from our human experience. One of those organisms could be the worm-like parasite. Many of our human ancestors would have been infected with helminths, as are large numbers living in developing nations today. When helminths infect individuals and attach themselves in their hosts’ gastrointestinal tracts, the immune system launches an attack, while at the same time issuing a chain of anti-inflammatory orders to ensure the response does not get out of hand. People who survived infection have passed on immune advantages to future generations. In the modern, developed and sterile West, the theory goes, immunoregulatory effects no longer develop normally, leaving some particularly vulnerable to allergies and inflammatory diseases. “It’s not that you’re diseased or abnormal, it’s just that the world has changed,” said David Elliott, hepatologist at the University of Iowa, and Weinstock’s research colleague.

West Not Best. Patients desperate for health and a normal life after Western medicine has given them no hope turn to many things. Some stricken by severe autoimmune diseases have turned to acting upon the theories of Weinstock, Elliot and other researchers. Jasper Lawrence is one of them. Stricken with devastating asthma and other ailments, Lawrence intentionally infected himself with worm parasites known as helminths. His health improved dramatically. Thousands of other stricken have followed suit and an illegal, underground network of helminth therapists and users has sprung up worldwide. One top-notch clinical trial using parasite worms to treat Crohn’s found 80 percent effectiveness with 70 percent remission. And that’s just the beginning of the success stories. Lawrence and partners maintain a website at www.autoimmunetherapies.com.