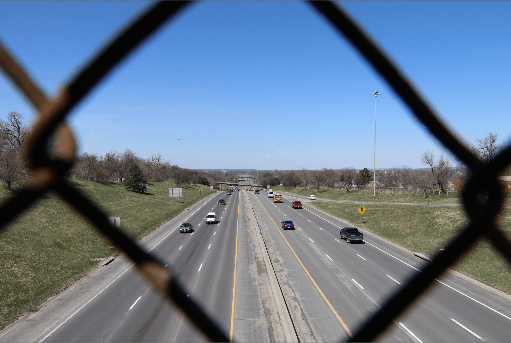 North Freeway construction gouged Omaha’s Near North Side in the 1970s-1980s. Residents got displaced,  homes and businesses razed, tight-knit neighborhoods separated. The concrete swath further depopulated and drained the life of a district already reeling from riots and the loss of meatpacking-railroading jobs. The disruptive freeway has remained both a tangible and figurative barrier to community continuity ever since.

Chapman’s socially-tinged piece about the changed nature of community makes its world premiere Thursday, May 31 at 7:30 p.m. as part of the Great Plains Theatre Conference’s PlayFest.

The site of the performance, The Venue at The Highlander, 2112 North 30th Street, carries symbolic weight. The organization behind the purpose-built Highlander Village is 75 North. The nonprofit is named for U.S. Highway 75, whose North Freeway portion severed the area. The nonprofit’s mixed-use development overlooks it and is meant to restore the sense of community lost when the freeway went in. 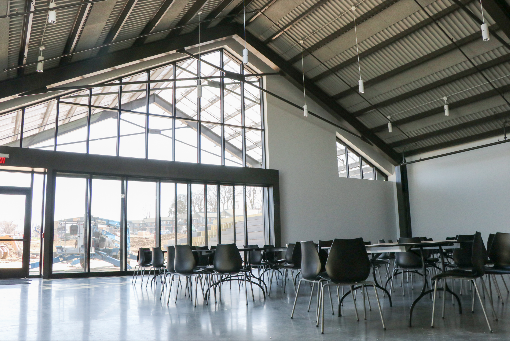 “Historically, in city after city, you see the trend of civil unrest, red lining, white flight, ghettoizing of areas and   freeway projects cutting right through the heart of these communities,” Chapman said.

Such transportation projects, she said, rammed through “disenfranchised neighborhoods lacking the political power and dollars” to halt or reroute roads in the face of federal-state power land grabs that effectively said, “We’re just going to move you out of the way.”

By designating the target areas “blighted” and promoting public good and economic development, eminent domain was used to clear the way.

“You had to get out,” said Chapman, adding, “I talked to some people who weren’t given adequate time to pack all their belongings. They had to leave behind a lot of things.” In at least one case, she was told an excavation crew ripped out an interior staircase of a home still occupied to force removal-compliance.

With each succeeding hit taken by North O, things were never the same again

“There was a shift of how we understand community as each of those things happened,” she said. “With the North Freeway, there was a physical separation. What happens when someone literally tears down your house and puts a freeway in the middle of a neighborhood and people who once had a physical connection no longer do? What does that do to the definition of community? It feels like it tears it apart.

“That’s really what the play explores.”

Dramatizing this where it all went down only adds to the intense feelings around it.

“As I learned about what 75 North was doing at the Highlander it just made perfect sense to do the play there. To share a story in a place working to revitalize and redefine community is really special. It’s the only way this work really works.”

The African-American diaspora drama resonates with Lorraine Hansberry’s A Raisin in the Sun and August Wilson’s Jitney with its themes of family and community assailed by outside forces but resiliently holding on.

Three generations of family are at the heart of Chapman’s play, whose characters’ experiences are informed by stories she heard from individuals personally impacted by the freeway’s violent imposition.

Faithful Miss Essie keeps family and community together with love and food. Her bitter middle-class daughter Thelma, who left The Hood, now opposes her own daughter Alexandra, who’s eager to assert her blackness, moving there. David, raised by Essie as “claimed family,” and his buddy Teddy are conflicted about toiling on the freeway. David’s aspirational wife, Mae, is expecting.

Through it all – love, loss, hope, opportunity, despair, dislocation and reunion – family and home endure. 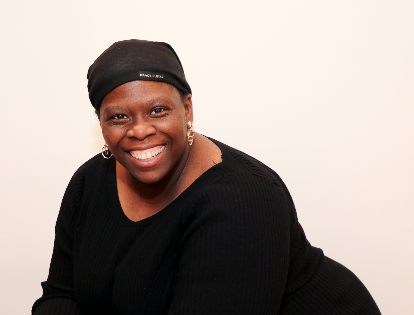 “I think it really goes back to black people in America coming out of slavery, which should have destroyed them, but it didn’t,” Chapman said. “Through our taking care of each other and understanding of community and coming together we continue to survive. We just keep on living. There are ups and downs in our community but at the end of the day we keep redefining community  hopefully in positive ways.”

“What makes Denise’s story so warm and beautiful is that it does end with hope,” director Carla Stillwell said.

Past and present commingle in the nonlinear narrative.

“One of the brilliant things about her piece is that memory works in the play in the way it works in life by triggering emotions. To get the audience to experience those feelings with the characters is my goal.”

“The response from the audience is unlike any response you see at just kind of a standard theater production,” GPTC producing artistic director Kevin Lawler said, “because people are seeing their lives or their community’s lives up on stage. It’s very powerful and I don’t expect anything different this time.”

Neighbors is Chapman’s latest North O work after 2016’s Northside Carnation about the late community matriarch, Omaha Star publisher Mildred Brown. That earlier play is set in the hours before the 1969 riot that undid North 24th Street. Just as Northside found a home close to Brown and her community at the Elk’s Lodge, Neighbors unfolds where bittersweet events are still fresh in people’s minds.

“The placement of the performance at the Highlander becomes so important,” said Chapman, “because it helps to strengthen that message that we as a community are more and greater than the sum of the travesties and the tragedies.

“Within the middle of all the chaos there are still flowers growing and a whole new community blossoming right there on 30th street in a place that used to not be a great place – partly because they put a freeway in the middle of it.”

Chapman sees clear resonance between what the characters in her play do and what 75 North is doing “to develop the concept of community holistically.”

“It’s housing, food, education and work opportunities and community spaces for people to come together block by block. It’s really exciting to be a part of that.”

ChapMan is sure that Neighbors will evoke memories the same way Northside did.

“For some folks it was like coming home and sharing their stories.”

Additional PlayFest shows feature a full-stage production of previous GPTC Playlab favorite In the City in the City in the City by guest playwright Matthew Capodicasa and a “homage collage” to the work of this year’s honored playwright, Sarah Ruhl, a MacArthur Fellowship recipient. Two of Ruhl’s plays have been finalists for the Pulitzer Prize.

Capodicasa uses a couple’s visit to the mythical city-state of Mastavia as the prism for exploring what we take from a place.

“It’s about how when you’re traveling, you inevitably experience the place through the lens of the people you’re with and how that place is actually this other version of itself – one altered by your presence or curated for your tourist experience,” he said.

In the City gets its world premiere at the Blue Barn Theatre on Tuesday, May 29 at 7:30 p.m. Producing artistic director Susan Clement-Toberer said the piece is “a perfect engine” for the theater’s season-long theme of “connect” because of its own exploration of human connections.” She also appreciates the    open-ended nature of the script. “It’s evocative and compelling without being overly prescriptive. The play can be done in as many ways as there are cities and we are thrilled to bring it to life for the first time.”

You Want to Love Strangers: An Evening in Letters, Lullabies, Essays and Clear Soup celebrates what its director Amy Lane calls Ruhl’s “poetic, magical, lush” playwriting. “Her plays are often like stepping into a fairytale where the unexpected can and does happen. Her work is filled with theatre magic, a childlike sense of wonder, playfulness, mystery. We’ve put together a short collage that includes monologues, scenes and songs from some of her best known works.”

All PlayFest performances are free. For details and other festival info, visit www.gptcplays.com.