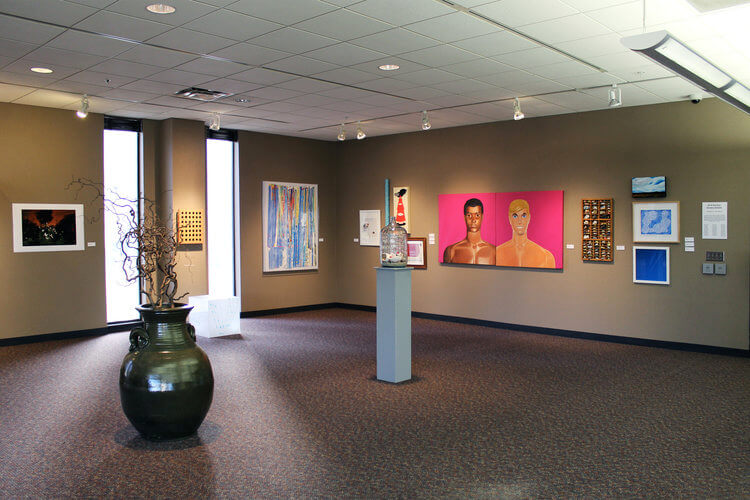 Yo, Omaha artists! We really get along well, don’t we? Sure, there’s this and that but on the whole we are a large and supportive group. Take the group show The Science Fair from a few years back as an example.

Nearly 100 artists and musicians showed at Urban Storage over the course of two weekends complete with man-made tequila-soaked beaches, virgins sacrificed to volcanoes, block-sized video installations and a grandma-ish kitchen replica. Oh, and the more traditional paintings, performances and sculptures as well.

The icing on the cake was the 3,000 or so people that came out of the snow-covered woodwork to see it all. It was big.  As one of the event’s organizers, I can honestly say the event allowed the younger art community to show up in total force and present a survey of itself to the city.

It gave dozens a chance to have their work displayed in a major way for the first time. Overall, it was a very fun couple of nights that will go down in Omaha art world history, whatever that means. But was the event good? Ironically, I don’t think so. There’s a large danger with including everyone who wants to be, in one event, because not everyone makes good art.

It’s why this city is smattered with spaces and galleries that support artists. No matter their level of talent, it gives all a chance to show, learn and grow. Yet, the idea that then all should get a shot at the same show or space just doesn’t work. I remember a late-night argument I participated in on a fire escape in midtown years ago where a young ceramicist tried to convince me that all art shows in Omaha should happen on the same night and all the artists should split the grossed sales. Thank the sweet Lord she moved to Chicago last year. There are limits to inclusion.

That being said, it’s nevertheless fun to see someone attempt a community-spanning exhibition. It’s like watching a car sliding on ice down a hill: you get an evil little tickle when, after sliding for 70 feet at five miles an hour, it bumps another car, and all the while you’re hoping deep in your heart that the driver succeeds at stopping while avoiding tragedy.

Enter our driver, young up-and-comer curator, Alex Priest. His vehicle, the expansive, 2014 Survey: Omaha Artists at the Michael Phipps Gallery inside the W. Dale Clark Library in downtown Omaha. Consisting of 46 visual artists and one poet displaying their work visually, Survey… Is really pretty damn good. It covers the young nearly-unknowns, the emerging and post-emerging and the mid-career-established. It’s all there tucked into one corner of the library’s main floor.

Hung in a neat salon style on every available wall with sculptural works dotting the floor space, the show is packed with goodies for your eyes. So, why these artists? Why at the library? Priest, who has been volunteering as a curator of the space for the last year, spent a great deal of time visiting studios and galleries across the city and put the call out to 150 area artists who he felt were adding to it’s cultural identity and personality.

“I’ve lived here for three years and I’ve always found it interesting how many art worlds there are in Omaha,” he said. “I wondered what would happen if you pulled them together into the context of a library, into a place where you go to access information. I was hoping this exhibition would facilitate a conversation between these groups and I think that I succeeded in that.”

The latter portion of that statement is true. The gallery is bursting at the seams with artists who most likely would have never shown together otherwise, and the opening provided a chance for all of them and their respective audiences to gather and continue the conversation initiated by their curator.

To cover every artist’s contribution here would be overload, you need to go see it yourself, but I will say before I highlight any of the work, the exhibition never falls short of expectations. There are no paintings of Jim Morrison. There are no charcoal portraits of your sister’s baby. There are no close-up photos of rusty corners of gas station signs.

Simply put, it is a tight group of good, honest work. Immediately, upon entering the space you are greeted from across the room by Dawn Smith’s “Celebrating Marriage”, a large diptych painting of two male Barbie dolls, Ken who is white and Steven who is black, both on a hot pink background.

The painting’s narrative of the joy of marriage, regardless of gender or race is spot on. With same-sex marriage being fought over across the country and racists ranting about bi-racial couples in Cheerios commercials, Smith’s painting gives us a glimpse of how far this country has come and also how far we have to go. In this work, we finally get to enjoy Ken’s joy as he smiles at the world’s perspective changing while Steven is cold and withdrawn, as he knows the road ahead. Plus, I couldn’t help but imagine Ken inviting his buddy over and sending Barbie out on a shopping spree with Skipper.

Next we have Holly Kranker’s “Rererangi”, a white bow of a ship jutting out into the gallery. In researching the title, the term seems to refer to aircraft, which is quite fitting. This ship has been lifted from the sea and blown through the gallery wall providing a clean break in the show. Josh Norton’s “Yeti Hand”, one of the exhibition’s smaller, mixed-media works brings a little bit of edgy, under-the-radar fun to the group as does “Untitled 02”, Luke Severson’s mustachioed portrait of San Francisco Giant’s pitcher Gaylord Perry.

Highly established Omaha photographer Laurie Victor Kay really surprises with a nighttime oceanscape so nearly devoid of all color and detail that it appears all black upon first notice. This is what representational painters hope to see when they think of all black work. Phil Hawkins continues his refinement of and investigation into the pyramid with “Enigma”, a small wall sculpture with a near bass boat gold finish.

Another high note is hit by the always dependable Jamie Burmeister whose “Boing”, a hand-cranked zoetrope, depicts an image of the artist pelvic thrusting with each humorous “boioioinnnnngggg!” that will satisfy the inner Bevis and Butthead in all of us.

As mentioned before, the shortcomings of this exhibition are few and far between, but there are a few. Mostly they’re from work that we’ve seen before in other spaces or from artists who deliver fairly predictable work. In the case of this exhibition, it doesn’t seem to matter as much; it still feels good to see there are people here making persistent and consistent work.

A disappointment of another kind comes from a lack of the complete experience of an artwork. Rich Mansfield’s “No No Deer” makes arguably one of the strongest first impressions in the group. Like a Bambi on a bender a fawn crudely yet beautifully built of painted wood stands on an Astroturf pedestal behind which an extension cord trails our toward an electrical outlet, unplugged.

After minutes of talking myself in and out of it I quietly plugged it in only to have the deer’s head immediately turn in my direction with a sound like a VW Beetle on its last breath magnified by the total silence of the library. It was heaven until the scowls and stink eyes of the librarians forced me to unplug it. The space should never limit the work as long as it fits through the door.

A more traditional objection is Reggie Leflore’s figurative portrait “Priya The Overseer,” which though very well done, relies on a composition and palette that leans a little too close to the work of hack-to-be Shepard Fairey for comfort.

Finally, there were two enormous floor vases stuffed with branches placed incongruously among the work. I assume these were library decoration, because I left before I could locate a wall tag that said otherwise.

Nevertheless, In closing, it felt reassuring leaving the space that there are a ton of us in this little town, all making art at our own pace and skill level. Wherever you are, rest assured there is a place for you, and it might have become just a little bit bigger by this exhibition. Priest aimed to knock down some walls between our micro art communities and reintroduce us to each other as he reintroduces us to the city.

2014 Survey: Omaha Artists continues at the W. Dale Clark Gallery, 215 S.15th St., until its closing Dec. 31. For details and hours go to omahapubliclibrary.org.