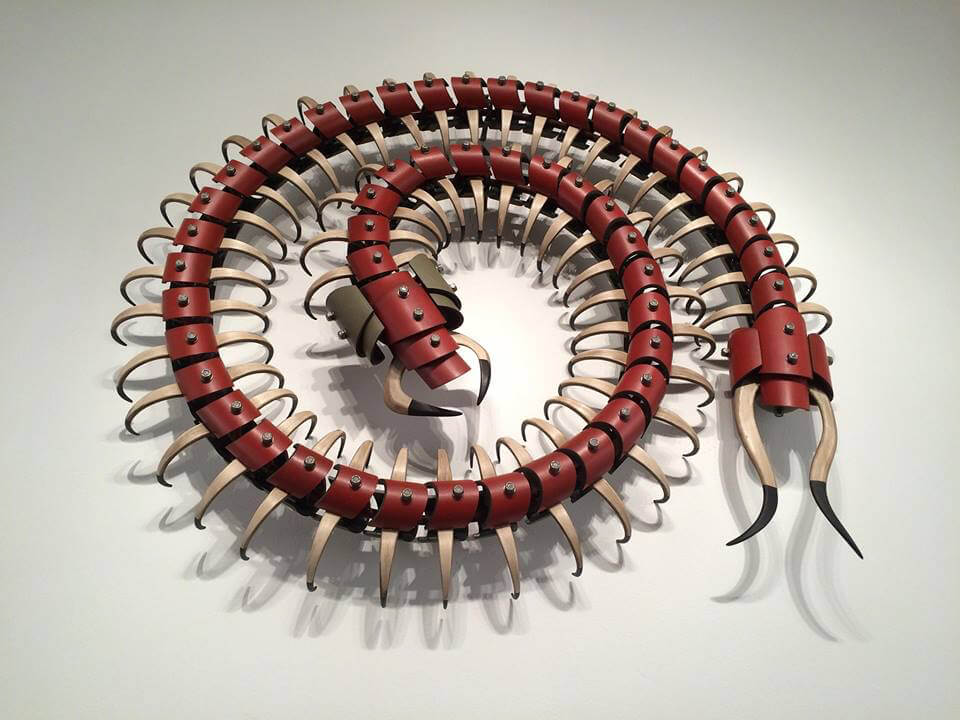 In 2011 pop star Rihanna released the international chart topper “S&M”. This sexually suggestive song about bondage informs the listener through a catchy beat and monotonous lyrics, that “chains and whips” are exciting.

Fourteen years earlier at Walt Disney World, “It’s Tough to Be a Bug!” opened to the public as a multisensory attraction congruent to the animated feature “A Bugs Life”.

While neither has a direct connection to the current exhibition at Garden of the Zodiac by Lincoln-based artist Jar Schepers, they provide a framework of references that is hard to ignore.

The exhibition, titled Repetition, is, as one can imagine, full of repetitious content and continuation of the artist’s highly crafted prodess. However unlike the traditional work that is usually shown at Garden of the Zodiac, Schepers’ explicit objects are imaginative and charged with tongue-in-cheek provocations.

Walking into the gallery, which is usually overfilled and exhaustive, one may be shocked to find that the walls are nearly bare. This is key to the exhibition. The work on view is, for the most part, extremely heavy (literally and figuratively).

Immediately to the north is “Diatom”, a cute cylinder of found objects that could be a bug, something found in a garage sale free bin, or from Nana’s knick-knack cabinet. The round piece has transparent green and white opaque appendages that meet in the tripod of microphone looking eyes.

The label provides a sense of material hierarchy describing what is otherwise obtuse. Nevertheless, this is the least successful object in the exhibition. Luckily it gets better.

Around the corner is the very large “Locust Mandala”. With oversized and seemingly paper-thin ochre wings and three contorted legs, the wall-work appears as textbook example of “the effects of Global Warming”.

“Locust Mandala” is very peculiar and alluring. Three glossy black orifices look back at the viewer, and the fan-like wings are so carefully crafted with faux-finishes, it is hard not to get jolted into thinking you may be at a science museum (or “It’s Tough to Be a Bug!”).

Across the gallery is “Precision-Zodiac Wheel”, a twelve-headed Ferris Wheel with every kind of reference imaginable: a dog-goat, an alien, Darth Vader, a ghoul, a head from Mount Rushmore, a flakey underwater merperson, among others.

These decapitated goblins are attached to an exquisitely manufactured steel apparatus. Imagine a torture device from the film series “Saw”.

Despite the detestable “do not touch the art” signs un-artfully placed throughout the gallery, this work should be activated. A handle is an invitation to move the precise structure via an ungreased bike chain. Chris Burden would be proud.

The robotic cat-chicken “Retrofit” is, unlike “Precision-Zodiac Wheel,” not the kind of device that moves or should be touched. It’s at a fragile standstill. Crafted out of a band of misfit toys, wood, and a hamster wheel, the model is ready for the next Pixar movie, probably voiced by Ellen.

In the back gallery, Schepers begins to infuse his work with more adult-themed references.

Beyond the cat-chicken is “Reclamation”. This object is a Hulk-y hand, which we only later discover, is tautly held together by an intricate pulley system. Like something from the depths of the blue lagoon, the large humanoid appendage is covered in the same green “moss” as the Union Pacific model at the Durham Museum.

As a continuation of the Cabinet of Curiosities found in the exhibition, this object has a “Gulliver’s Travel” scale shifting quality. The pulleys are small, the hand is large–who is controlling whom, and why?

The neighboring lunch box of horror titled “Maiden China” would certainly excite Rihanna. As a small sculpture on pedestal, it contains dozens of spikey toothpicks for what could be a prop for a sadistic sideshow.

“Maiden China” is tame compared to “Deka Hecto Kilo”. At first glance this wall creature looks digitally rendered. Upon closer inspection the cinnamon leather cuffs and birch colored spikes slither into a form reminiscent of a millipede. If form follows function, we are certainly in for a treat (these are the chains and whips Rihanna was talking about).

With similar motifs and color tendencies, the back wall of the back gallery is flanked with the last specimen of Repetition. “Homage to the Porcelain God” is a skeleton of an unknown beast. Although beautifully lit, the drama of this piece is the faux-shadow, which is listed in the wall label. As one of the more successful objects in the exhibition, it is a treat to find. It’s full of metaphor, contradictions, repetition, odd material juxtapositions (see toilet seat!) and crafty elegance. It encapsulates everything seen in the exhibition. It is simultaneously real and fake, and it knows it.

As an endnote, “Homage to the Porcelain God” is also frustrating. Am I the viewer supposed to “like” it (I saw it posted several times on Instagram with numerous “likes”), or am I supposed to feel repulsed/let down by its cunningness? I teeter between feeling like Rihanna and an anxiety-ridden parent at Walt Disney World. Is this okay?

Jar’s jarring work is all too real, yet it’s not. Fake artifacts and faux finishes render objects that are less than stationary. As a possible soundtrack for the exhibition, Rihanna’s “S&M” is set on repeat. Her lyrics “I like it, like it, come on, come on” act as a tour guide.

From the mastermind of a mad scientist meets transient carny meets Edward Scissorshands; Repetition is filled with obvious/obnoxious tendencies and moments of surprise mounted on mechanized armatures. The exhibition wanders between set design and eroticism, and it feels like that is the point.

Jar Schepers: Repetition is on view at the Garden of the Zodiac, located at 1042 Howard Street, through June 19.