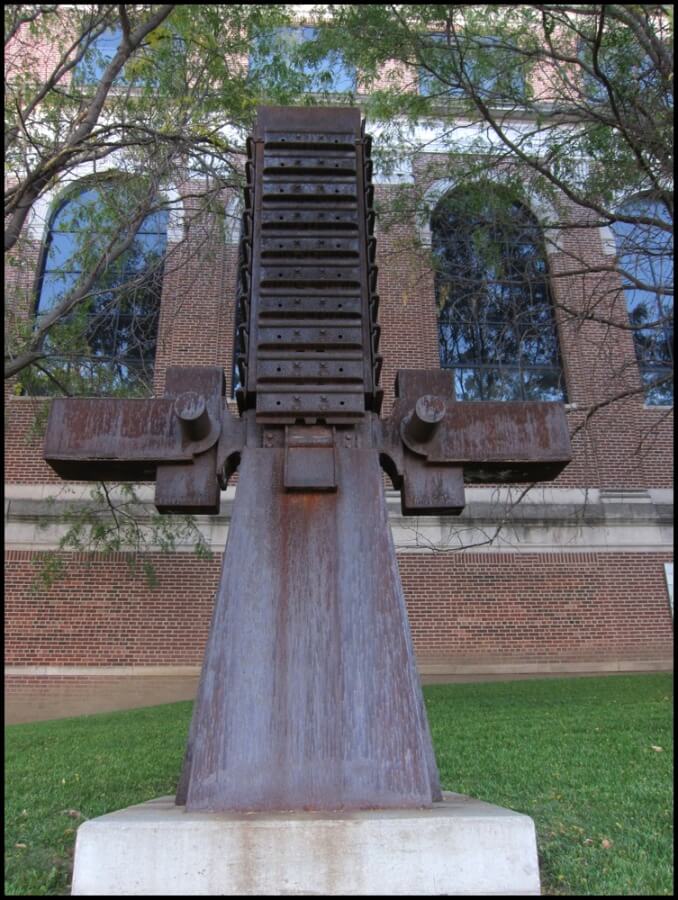 Artist Sidney Buchanan is known for his enormous public sculptural work around the city—at University of Nebraska-Omaha, Omaha Public Schools administration center, Eppley Airfield, Gene Leahy Mall, University of Nebraska Media Center, Joslyn Art Museum and more. His work, including drawing and smaller wood sculptures, is also collected in private collections nationwide. This weekend, he is hosting a retrospective of work from 1962 to this year including over 50 pieces ranging from steel outdoor sculptures to wood maquettes to two-dimensional collages. Eddith Buis, who has known him since she studied under him at UNO in the 1970s, said of her longtime friend, “Sidney Buchanan is the best thinker in 3-d around…He can instantly see if a work is feasible in the physics realm. His sense of design is unerring.” The show takes place April 27 (6-9pm), 28 (1-5pm) and 29 (1-5pm) at 1202 S. 62nd Street.

Kent Bellows Studio and Center for Visual Arts and Westside High School student Lila Ferber created a sculpture out of Scotch Tape that is in the top five out of 100 entries in the sponsor’s national contest to create a piece of art out of the tape. “One Octopus Band” was created for a Kent Bellows project and can be seen and voted on at offtherollcontest.com. The top two-voted sculptures will move onto the final round where Scotch Tape judges will determine the Grand Prize winner to receive $5,000. Ferber wrote an artist statement: “This piece shows my love for art & music. The octopus is a one ‘man’ band hoping to earn some extra cash as he entertains. He plays the flute (like me), trumpet, harp and maracas. I filtered the sunlight through blue cellophane, creating an underwater effect…It’s life size, with 660 tape suction cups, & has movable parts like trumpet valves, flute keys & fishing line strings. I made the octopus with a pillow, umbrella and balloons. It was a fun challenge.“ Ferber would use the award proceeds to save for college. offtherollcontest.com.