Home » Film » Close to Something 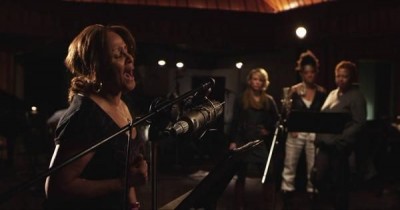 In one of the most insightful, clever comments in a movie surprisingly devoid of insightful, clever comments, backup singer Janice Pendarvis notes, “When you think about the history of pop music and all the memorable hooks that most people sing along with, they’re singing along with us most of the time.” Multiply that one idea by 90 minutes and you have the entirety of 20 Feet from Stardom, a documentary that follows the right subject in the wrong way.

Director Morgan Neville’s decision to move his camera lens a few feet to the side of the lead singer was smart. Since the dawn of recorded music, the nameless choirs who provided the spot-on harmonizing and amplified scope of the sound have been treated as second-class singers. Mostly women, specifically women of color, this unofficial sorority is often forced to also serve the part of eye candy, tarting up the stage with sequined shimmying. They are stripped of individuality and identity, grouped together in both outfit and name, and given a place just outside the spotlight to stand. These are fascinating people.

So why is the documentary so boring? Neville makes a strange choice to focus on the “rah-rah” cheerleading of music, as though songs needed a champion to defend them against legions of haters who want to squash all things melodic. He raises his subjects, most notably the heavenly-piped Darlene Love, as heroes but glosses over the most fascinating elements of their careers. The frustration at a lack of success and willingness to subdue individual desires in order to “serve the greater sound” is prima facie; nobody needs to see a documentary on backup singers to know that backup singers are, in fact, kept in the back.

Neville either failed to lead these talented women into a discussion of the most important issues or felt it didn’t fit the larger narrative he was composing because discussions of race are barely present. That’s right; although many of these singers were most active during the 1960s, a rather notable time for civil rights issues, nobody explores the possible bigotry that kept Love from the limelight. Even the discussions about physical appearance are tame, glancing references to “not having the right look.” The commodification of sex is blatantly dropped. An interviewer points out to a woman claiming she never saw her position as a sexual role that she appeared in Playboy, and then the film just moves along like it never happened.

And where are the stories these people must have about the stars they toured with? Surely they had unprecedented access to the lives of these folks. The nature of the relationship between the lead singers and their supporting vocalists is completely absent, save for folks like Sting saying what a great job they do. 20 Feet from Stardom is a nice, easy watch that gets you rooting for the little gals and celebrating music. But it is a bit ironic that the film we could have seen is somewhere to the side of this one, probably no more than 20 feet away.