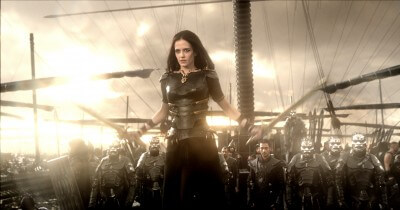 When director Zack Snyder’s opus of underwear modeling amidst geysers of animated blood, 300, first arrived eight years ago, no one expected a sequel. And not just because 299 of the 300 Spartans were way too dead to return. Technically, 300: Rise of an Empire isn’t a sequel: It’s a prequel…and a side-quel…and a sequel… Look, to fans of the first film, all that really matters is swordfight, naval battle, crazy sex scene, severed head toss and hunchbacks throwing fireballs. Any questions?

The non-sequel sequel opens with the widowed Queen Gorgo (Lena Headey) readying Spartan warriors for battle. Rightfully super pissed about her husband’s decapitation, Gorgo tells the troops about what started the conflict between the Persian Empire and the Greek city states. Using language lifted from Dick Cheney’s Mad Libs, Gorgo explains that the Persians “hated the Greeks’ freedom.” Flashing back to years before the original 300, we see a chubby Persian king try to show Greeks democracy is dumb by killing them. Only, Themistokles (Sullivan Stapleton) kills him in front of his son, Xerxes (Rodrigo Santoro). That’s old school diplomacy.

From the past, the new film catches up and spends a long time occurring simultaneously as the original; Themistokles and the outnumbered Greeks are holding off a Persian naval invasion while Leonidas and the 300 are dying elsewhere. Sadly, the crappy Greek ships seem to be made of balsa wood and bubble gum, and the bad guys have an awesome naval commander, Artemisia (Eva Green). Dressed like a Goth dude’s dream girl, Artemisia was born in Greece but was sex trafficked into Persia by fellow Greeks. Now she wants to kill them all. The only hope of defeating the superior force is if the Spartans join the Greek army to avenge the 300 warriors who are dead by the third act of this film. It’s far less complicated than it sounds.

In fact, it feels like there almost is no real plot, as if it is nothing but face stabbing and a truly unique sex scene between Artemisia and Themistokles. In the middle of an epic battle, the two leaders hatefully consummate their feud atop a strategy map. It’s one of those “thin line between love and hate” moments, where the only thing that prevents it from being an extension of patriarchal rape culture is the fact that Artemisia initiates, dominates and terminates said weird intercourse.

New director Noam Murro is clearly ghost-directed here by Snyder, imitating every stylistic choice from the first film. This isn’t bad, but also isn’t surprising or original, thanks to the scores of imitators who copycatted the original film. It should be noted that part of the “fun” with this graphic violence is the unreality. As plumes of human juice spurt in impossible shapes and quantities, the movie becomes less and less real and more and more cartoony/comic booky (and more and more enjoyable). Elevated only by Green’s gleefully demented performance, 300: Rise of an Empire, to its credit and its detriment, plays like a fun but needless extension of its predecessor.