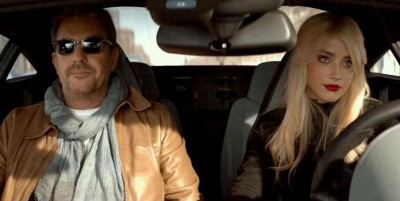 For the last decade, Kevin Costner mostly kept to himself, popping up only to save our oceans from oil spills with inventions from Waterworld and to convince Superman he shouldn’t be so super, man. But now my least favorite actor is back, and he’s looking to make up for lost time in the “things that suck” department. And sweet tap-dancing Moses does 3 Days to Kill suck.

3 Days to Kill is so impossibly bad it is either an inside joke we don’t get or Costner’s personal “eff you” to me. It is littered with racist caricatures, nonsensical plot contrivances, light misogyny and the sight of Costner in a friggin’ decorative scarf for two hours. I’m aware the scarf thing shouldn’t bother me as much as the other stuff, but if you can make it the full running time without fantasizing about choking his character to death with it, you’re a better person than me.

The “character” in question here is Ethan Renner (Costner), a stunningly lethargic and nondescript CIA badass who finds out he has brain cancer. With only weeks to live, Ethan tries to reconnect with his estranged wife (Connie Nielsen) and daughter (Hailee Steinfeld). They hate him because he’s the cliched “absent father obsessed with his job.” Normally, that’s a fair criticism to level, but Ethan is out disarming rogue nuclear weapons. He should be able to say “Hey, you know how Sara’s dad sells Hondas all day? I prevented armageddon, so maybe you cut me a break?”

Actually, Ethan does get a break, in that the leather-clad sex object/CIA operative, Vivi (Amber Heard), just so happens to have a magic, glowing serum that fixes brain cancer. But she’ll only give it to him if he stops multiple bad guys whose names have the article “the” in them. There’s The Albino (Tómas Lemarquis), who is albino, and The Wolf (Richard Sammel), whose real name is Wolfgang. There’s also an accountant you’d think would be called “The Numbers,” but his actual name is Guido (Bruno Ricci). In case you didn’t know he was Italian, he offers a recipe for spaghetti sauce at gunpoint.

Then there are the squatters who take over Ethan’s apartment out of nowhere. It’s a whole family infused with the “Magic Negro” racist schtick, including young black kid who just wants a high five and a father figure who reminds Ethan what’s really important. Between that and the depiction of Vivi, who inexplicably transforms from trusted high-ranking official to sex-obsessed trollop, it’s hard to say what’s most offensive. The scarf. The scarf is most offensive.

There are two competing and incompatible movies happening at once in 3 Days to Kill: one is a loosey-goosey action comedy, the other is a dramedy about a dad reconnecting with his teenage daughter by doing things like teaching her how to finally ride a bike. Both of those movies suck. Combine them, and you have a reminder why we must stay vigilant lest Costner get famous again. Not this time, Kevin. Not on my watch.