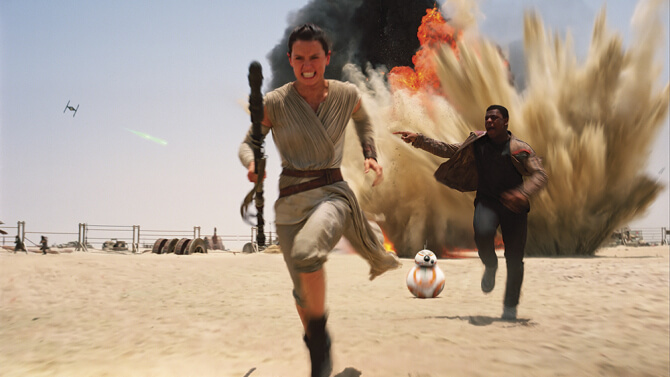 Nostalgia, like love, erodes rough edges; it fills in gaps, paints clean what was scuffed, and forgives copious small sins in the name of happiness. I’m sorry, but none of the Star Wars movies have been perfect. Although some are demonstrably (laughably) worse, all abound with fractures and flaws. That we deeply love (some of) them is a gentle affirmation of their use of the monomyth and a reflection of how they made us feel. Basically, if you don’t think Star Wars: The Force Awakens is as good as the original trilogy, that’s almost certainly on you and not the film.

To be spoiler-free as can be, this is the tale of Rey (Daisy Ridley), a scavenger on a desert planet who finds a droid (the adorably rolly BB-8) with important information. She’s joined by Finn (John Boyega), the rarest of all Stormtroopers: One with heart and good aim. They stumble into Han Solo (Harrison Ford) and Chewbacca, run afoul of the evil Kylo Ren (Adam Driver) and assist heroic pilot Poe Dameron (Oscar Isaac) in his fight against the evil First Order. It’s all standard, boilerplate blockbuster content.

So what makes it special? The characters. I don’t know I can even pick a favorite. Finn restores the franchise’s sense of wonder and enthusiasm. Unlike any other character in the entire franchise, he’s a man searching for something to believe in. Poe is a brash, swashbuckling pilot. Fearless and loyal beyond reproach, he’s also quick-witted, sparring as well with heroes like Finn as he does with villains like Kylo Ren. Speaking of our new man in black… The creative team took the impossible task of trying to live up to the reputation of Darth Vader and made that into a character. Lord Vader was an invulnerable fear machine; Kylo Ren is a petulant child with a laser sword.

And then there’s Rey. For some reason, people forgive the fact that Luke Skywalker sucks as a minor flaw; as if having the epic hero of an “epic hero journey” be obnoxious is a small issue. Rey is the new Luke analogue. And she is perfection. Exceptionally clever, fierce as hell, kind, loyal and kick-ass, Rey is the physical incarnation of this new series’ promise. Her every action dispels the ignorant assumption that feminine and strong can’t inherently be the same thing.

Every complaint leveled at director JJ Abrams’ triumphant, exhilarating reboot feels petty or ill-conceived. Is there essentially “another Death Star?” Yes. Tell me, are real-world militaries still developing the biggest bombs they can? Does the story skew remarkably close to the plot of A New Hope? You betcha. Were you expecting a franchise whose main character is on the cover of Joseph Campbell’s “Hero With a Thousand Faces” to break new storytelling ground?

Every once in a great while, the world congregates around a piece of popular culture. It is a unifying, blissful experience. Such a thing requires a large degree of universality in storytelling. That’s not an oversight, it is intent. The Force Awakens faced one of the most impossibly daunting challenges in the history of modern cinema, restoring the greatest cinematic franchise in history to its rightful place. It did. You’ll forget everything else over time.