Home » Film » Not Actually for the Wrinkled 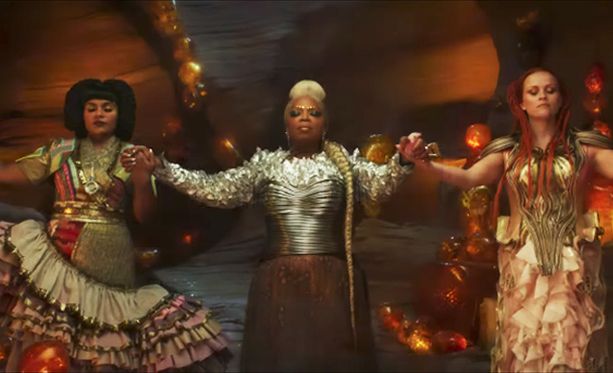 Is there an audience more massively under-served than nerdy girls of color? Not that they can’t get hawkish about Star Wars or marvel at some superheroes, but recent films that are laser(blast)-focused on that specific demo have to number close to zippo. A Wrinkle in Time is not for moldy oldies expecting to get winked-and-nodded at in order to maximize box office penetration. It is a passionate, imaginative love letter to brilliant, caring young women that is incredibly likely to entirely miss anyone else who accompanies them to the theater.

Things get wonky for wrinkled audiences faster than a quantum fart. Mr. Murry (Chris Pine) and Mrs. Murry (Gugu Mbatha-Raw) were working on interdimensional travel when Mr. Wonder Woman up and disappeared. Their daughter, Meg (Storm Reid), is handling the inexplicable poofing poorly, which makes her the perfect target for the most uninspired bullies in the history of middle school. Like, they leave a note on Meg’s locker that says they wish she had disappeared too. Did the first draft of that note read “We’re mean. Be sad now.”

Meg’s adopted younger brother, Charles Wallace (Deric McCabe), is only referred to with both names. This is because he somehow simultaneously puts the “oh shucks” in “precocious” and seems like an 80-year-old with a Depends full of Werther’s Originals. Charles Wallace introduces Meg to three magical escaped mental patients: Mrs. Who (Mindy Kaling), Mrs. Whatsit (Reese Witherspoon) and Mrs. Which (Oprah Winfrey). They explain that Meg must use the power of love to travel to other planets and free her father from The It, which is not the clown from the Stephen King adaptation, but wow would that have been great.

Here’s how you know the movie is made for a younger audience: At no point does anybody stop and say “What the living shit is going on here?!” Meg, Charles Wallace and the absolutely irrelevant/completely useless sentient-Tiger-Beat-magazine Calvin (Levi Miller) fling and flang across the universe like that’s just a thing you do sometimes. In fact, the entirety of A Wrinkle in Time could be called “Trust every weirdo stranger you ever meet and do whatever they tell you.” Have fun with that, parents.

Above all else, this is a film that aims to gently comfort awkward young women, encouraging them to take solace in their future, stoke the fires of their compassion and celebrate their unique intellectual perspectives. The visuals mimic this, with luscious kaleidoscopic nonsense that feels as genuinely kind as CGI can be. The performances, however, are jarring and abrasive, outside from Oprah, who is finally the literal Goddess she’s figuratively been this whole time. Witherspoon in particular is so grating that it feels like she turns to the camera after every scene to explain “I’m doing it this way because this is for kids, and kids are stupid.”

A Wrinkle in Time never quite feels transcendently magical, at least to someone eavesdropping on the conversation that director Ava DuVernay is lovingly having with the audience she chose to address. That’s okay. Not every movie can be—or should be—for everyone. Here’s hoping that this well-intended effort is whittled into the right key that opens the locked hearts it sought to free.