Home » Film » Nothing Can Be Changed Until It Is Faced 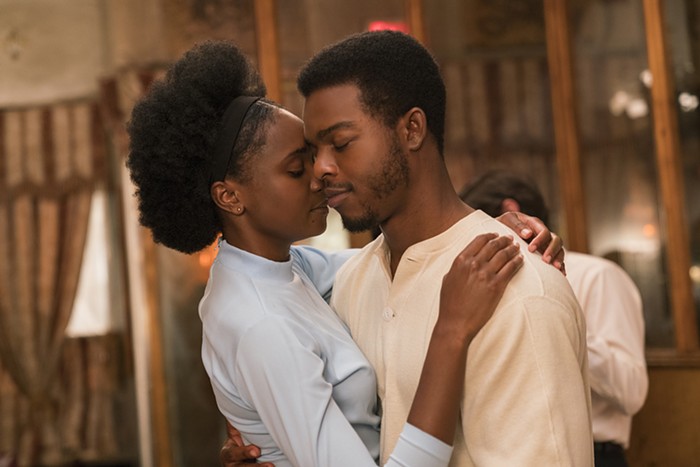 The suggestion that the oppressed have a burden to confront systemic injustice with love is some two scoops of raisins-in-the-sun bullshit. Instead, to understand the role that love can, should and must play in resistance, look no further than writer/director Barry Jenkins’s adaptation of James Baldwin’s If Beale Street Could Talk. As much a timeless, universal romance as it is a spirited indictment of the callous brutality that passes for the American “justice” system, Beale Street uses love as magnifying glass and spotlight. You do not meet racism and hatred with love: You use love to show what evil looks like by contrast.

Not that Baldwin’s words don’t always leap from the page, animated without the need for cinema’s helping hand, but damn if this movie doesn’t feel like the ultimate culmination of his original art. Tish (KiKi Layne) and Fonny (Stephan James) are young, profoundly connected and cursed to live in a country that resents them, even in poverty. Nonchronologically, flashbacks and the present day flirt, swoon and dance, telling the story of how the pair met, made a baby and then found themselves on the other side of jailhouse glass.

Accused of a rape he literally could not have committed, Fonny is told he will be a father as he awaits trial. Tish’s mother (Regina King) and father (Colman Domingo) work with Fonny’s father (Michael Beach) to beg, borrow and steal the money necessary to put up a defense that’s almost certain to fail. What follows is a competing, contrasting crashing of emotional tsunamis, as we watch how Tish and Fonny wove an unparalleled union while cruel forces now work to unstitch it.

If Jenkins could make, like, ten of these movies a year, nobody would have to make year-end movie lists anymore. At most a half-step less transcendent and revelatory than Moonlight, Beale Street is equally as important and just as patient and kind. Shocking racist atrocities must be confronted head-on and directly, but the thoughtless distribution of images containing murdered black bodies and the stories of judicial torture faced by so many are often PTSD wrapped in activism. Beale Street shows that the wicked intentions of white supremacy can be illustrated with a softness and sincerity that is no less revelatory. An old white man smells perfume from the back of Tish’s hand as she works at a department store, and it is no less appallingly grotesque in intent.

Every single performance in Beale Street, from Brian Tyree Henry’s single scene to Layne and James’s lyrical authenticity, is as flawless as the quiet, careful cinematography and vibrant soundtrack. That we live in a world celebrating the white apologia nonsense that is Green Book, a movie starring a Muslim actor and written by a man who tweeted anti-Muslim sentiment, and not Beale Street is just part of the reason why the latter film is so resonant and necessary. Please, please, please see this movie.