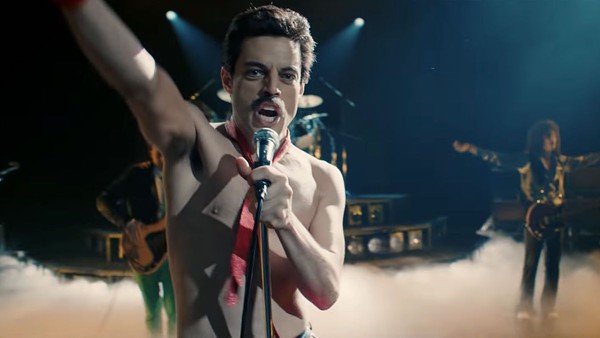 Bohemian Rhapsody is the story of a convention-smashing artist told as conventionally as legally allowed. This very-special-episode of Vh1’s Behind the Music wastes a passionate, nuanced lead performance by Rami Malek, choosing instead to simulate the experience of grinding up and snorting a CD of Queen’s greatest hits. Sure, that’s not altogether unpleasant, but it’s definitely not the ideal way to consume the music. Director Bryan Singer can be accused of many things—and boy has he!—but writers Anthony McCarten and Peter Morgan are equally to blame for what is a forgettable look at a sublimely unforgettable man.

Are synopses even needed for music biopics? Um, the legendary rock band Queen forms, gets famous, goes on hiatus and then gets back together shortly before Freddie Mercury (Malek) dies of AIDS-related complications. Boom, synopsized.

Malek tries so very, very hard to give depth and breadth to Mercury, but the movie belligerently skips over, like, all the good stuff. What specifics about his upbringing caused Mercury to feel untethered to his identity and change his name from Farrokh Bulsara? Dunno, they skipped it. How did a tepid heterosexual romance with Mary Austin (Lucy Boynton) grow into something so central to Mercury’s life? There’s basically one scene before they’re super dedicated to one another where she helps him pick out a scarf. Maybe it was a really good scarf? What truly motivated Mercury’s legendary sexual promiscuity? Other than the sheer power of his mustache, this too remains unclear.

No one can have a bad time listening to Queen off and on for a few hours, but imagine what could have been. Imagine a more fantastical film powered by Mercury’s whimsy and the band’s brilliance. Maybe a Mamma Mia!-esque musical or a Bronson-esque take where Mercury’s life is transformed into an opera. Perhaps a movie that used this music in contextualization of the AIDS crisis of the 1980s. Something—anything—that illustrated the singular nature of these people making this art. Instead, Bohemian Rhapsody makes one of the most staggering miscalculations in recent film history…

You can’t have spoilers in a movie about stuff that happened in real life, but the last half hour of the film is basically a real-time recreation of Queen’s Live Aid performance. That performance is considered holy, something still revered as among the best ever. Having not-Queen reenact the whole thing is totally insane, right? It’s like hiring an actor to paint “Starry Night” or play quarterback in the actual Super Bowl. The real Live Aid performance is available to watch. Why would anyone want to watch actors pretend to do that?

Any attempted piece of art—even a Bryan Singer film—should justify its existence by providing some measure of a unique experience. Other than Malek’s deft turn and music you can Spotify, Bohemian Rhapsody really has nothin’ for ya.