Home » Film » Swimming in the Laika 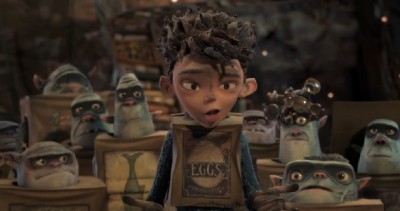 From Ray Harryhausen’s Medusa to Henry Selick’s Jack Skellington, stop-motion animation is just frickin’ cool, yo. Maybe it’s the meticulous nature of the art form, with each tiny gesture by a character necessitating dozens of miniscule movements and hours of work from animators. Maybe it’s the fact that the shiny, smooth sheen on today’s CGI kiddie flicks seems less intimate, less hand-crafted, less inviting. Whatever the case, the stop-motion studio Laika has upped its streak of engaging and mildly spooky children’s fare to three in a row. First there was Coraline, then Paranorman and now comes The Boxtrolls, the best movie to ever feature both exposed troll buttcheeks and a villainous drag queen.

Set in a town called Cheesebridge, which is surprisingly not a real European village, the film begins with the seeming abduction of a baby by monsters wearing boxes as clothing. The evil Archibald Snatcher (Ben Kingsley) sees an opportunity to elevate his social standing. As a lower-class “Red Hat,” his job is exterminating Boxtrolls, whereas men who possess a “White Hat” are given access to high society, which involves a rather alarming amount of cheese eating. Snatcher promises to rid the town of all Boxtrolls, provided he is made a White Hat after their complete extinction.

Turns out, the baby whose abduction and presumed devouring sparked this action isn’t dead. The kind, inventive, sewer-dwelling Boxtrolls have raised the boy as one of their own. They even gave him his own box and thus his name, as all Boxtrolls are named based on their boxes. Eggs (Isaac Hempstead Wright) is like Buddy from Elf in that he doesn’t realize he’s human and not troll. A decade later, when he is discovered on the streets during a midnight raid by a young girl named Winnie (Elle Fanning), he is suddenly forced to confront his real identity while attempting to save his adopted family from Snatcher’s evil plans.

The supporting characters are blissfully bizarre, including Snatcher’s henchmen: Mr. Trout (Nick Frost), Mr. Pickles (Richard Ayoade) and Mr. Gristle (Tracy Morgan). The Boxtrolls themselves don’t really speak so much as grunt, gibber and mouthfart. Still, somehow directors Graham Annable and Anthony Stacchi, along with writers Irena Brignull and Adam Pava, found a way to imbue them all with gleeful personality. From Egg’s adopted father figure, Fish, to the curmudgeonly Shoe and the adorable Oil Can, the Boxtrolls are all endearing.

Admittedly, the film sports a staggeringly stale thematic through line. “You make you,” is a repeated admonition to find your own self, which is what something like 90% of animated movies are about. Moreover, the bizarre decision to introduce Snatcher’s cross-dressing alter ego, Madame Frou-Frou, seemed like a cheap way to get some classless “ew, that was really a man?!” jokes. And yet, Laika is in a niche all their own, embracing a unique supernatural and slightly macabre space for children’s content. The Boxtrolls may be Laika’s “worst” film so far, but it’s still pretty good.