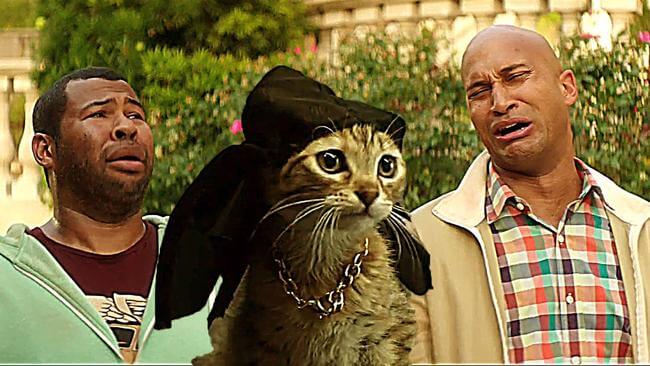 You either find it unbearably funny that a suburban dad named Clarence finds himself in a stripclub called HPV surrounded by hardcore gangsters who force him to take on a more “bad-ass name”—and that the “bad-ass name” he comes up with is “Shark Tank”—or you don’t. If you don’t, you are going to blipping hate Keanu. It is a relentless barrage of a slow-motion kitten frolicking wearing a do-rag while a street gang called “Blips” (made of Bloods and Crips) are taught to love the profound lyricism of George Michael. Watching an urban hitman named Stitches (Jamar Malachi Neighbors) unpack the meaning of “Father Figure” while weeping may well be the apex of comedic cinema.

The plot is obviously a bloated sketch from Keegan-Michael Key and Jordan Peele’s criminally underloved/underawarded series from Comedy Central. And that’s mostly forgivable because their “hit-to-miss” ratio on bits should have “SNL” writers playing Russian roulette until none remain. Rell (Peele) is recently dumped and inconsolable…for somewhere around a bong hit or two. Then he finds the single most scientifically adorable kitten in history, our titular character. The Blips steal Keanu in order to…um…because of…uh….reasons? So Rell grabs Clarence (Key), and the two pretend to be hardcore thugs to get Whiskers McAdorableNess back.

Rell, who becomes “Tectonic” as a street name, and Shark Tank are mistaken by Blip leader Cheddar (Method Man) for a pair of deadly assassins, because sure they are. Cheddar agrees to surrender the kitten, provided Shark Tank and Tectonic roll with Hi-C (Tiffany Haddish), the gang’s right-hand woman, and expand drug sales into a new market. Because, as all white people know, that is how the sale of illegal narcotics works: Kittens are used as blackmail to force faux gangsters to introduce supercrack to new neighborhoods. Then shooting and sight gags and a really great obligatory hallucination sequence makes everything else not matter at all.

People don’t think guns are dangerous. A significant portion of the country doesn’t believe in global warming. Donald Trump is the GOP frontrunner for president in May. So, even though the statement “Comedies must, first and foremost, be funny” seems like it should be obvious beyond mentioning, remember we’re living in the darkest timeline, presumably run by a God resembling the kid from Toy Story who melted stuff with a magnifying glass. Keanu is funny. Relentlessly. You want a good sight gag? Two cameos have you covered. You want some clever social commentary? Watch Key and Peele again mine the dance of racial code-switching to hilarious and brilliant effect. You want cat gags? That’s why the internet was made.

Keanu is never “transcendent.” Yes, it’s basically a 90+ minute sketch from the “Key & Peele” show. And that does make it derivative at times, with several obvious riffs on their best bits. But it’s also nonstop, top-to-bottom funny in every avenue available. It’s quotable, silly, clever…and funny. Did I mention funny? Because at the end of the day, if it was just that, Keanu would still be the pick of the litter.