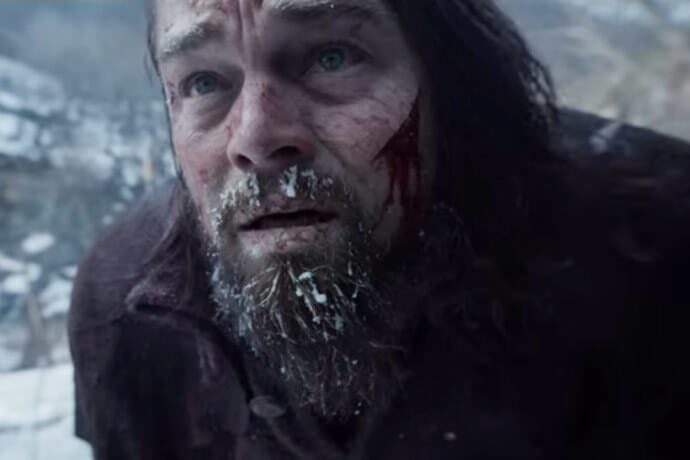 Without spoiling whether survivalist/tempting-bear-treat Hugh Glass (Leonardo DiCaprio) survives The Revenant, we can still talk about one climactic shot. DiCaprio, having been maimed in all maimable ways, stares directly into the camera, seemingly shattering the fourth wall by sheer force of will. Teeth grit, lips sneered, his eyes scream “is this enough? Huh? Is this finally enough? Daniel Day Lewis didn’t sleep inside a f**king horse like I just did! Give me what I am owed!” We are down to it, America: We give Leo the statue or he becomes a supervillain. Those are our choices.

The Revenant is director Alejandro González Iñárritu’s latest visually spectacular, intellectually lazy artistic show-off. In the early days of America, Glass leads a fur trapping expedition through treacherous territory. When a bear makes him a chew toy, in an epic scene we’ll talk about later, the wilderness explorer finds out that man is more treacherous than nature. Fitzgerald (Tom Hardy), a mumbling, half-scalped jerkfaced jerk, wants to leave Glass to die so he won’t slow them down. Glass’s son, Hawk (Forrest Goodluck), understandably objects. So, obviously, Fitzgerald guts Hawk and kicks Glass into a shallow grave. Too mad to die, the brutalized father sets out to avenge his son.

This vengeance mostly involves scenes of DiCaprio crawling desperately over various objects. He crawls over rocks. He crawls in piles of snow. He crawls inside a dead horse. DiCaprio’s belly was on the ground for so much of the shooting, for several months, he was legally considered a snake. The long, bleak sequences are meant to convey the harrowing nature of the survival story. And they do. But they also seem frequently redundant, even on a visual level. Not that cinematographer Emmanuel Lubezki doesn’t do his damndest to make every shot look gorgeous. It’s just, there’s only so many ways to show snow-covered rocks and blood.

DiCaprio will be nominated and likely win for this performance, in a notorious case of an actor winning for the accumulation of his performances in a soft year. Because, the truth is, while the shoot was likely physically demanding, acting isn’t really supposed to be about watching rich folks get dirty and lose weight. The “performance” here is mostly just grimacing and screaming. Hell, we spend nearly 3 hours with Glass, and all I can tell you is that he loved his woman and son and he’s really, really accident prone. I don’t know if Glass is a good man or a bad one, a soldier with regret over American treatment of Natives or a man who simply fell in love. He’s blank. See through. Glass.

As such, The Revenant is like Iñárritu’s last effort, Birdman, in that it’s a movie that convinces you it’s more significant and important than it is, when it’s really just pretty and kinda dumb. In fact, the lasting legacy of the film for me isn’t going to be anything that happened on screen. In the lead-up to the film’s release, rumors swirled on the internet that DiCaprio actually got “raped by a bear” in the movie. Of course, this is nonsense. But the rumors grew so strong, a studio exec had to officially say that “Leonardo DiCaprio does not get raped by a bear.” I guess there’s one thing left Leo hasn’t tried to win an Oscar.