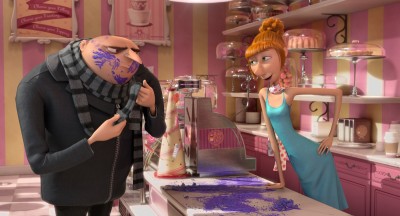 Dress it up however you’d like: Despicable Me 2 is all about reformed supervillain Gru (Steve Carell) trying to get himself some. Even his three adopted girls are like “dude, you need to get yourself some.” And Gru is all “no, really girls, I’m good with not getting any.” And the girls are all “No, but seriously, dad: Whatever girl is closest in proximity to you. Try to smash that.” And so he does. The end.

Despicable Me was a cutesy little ditty about a baldy with a javelin nose who changes from moon-stealing evil-doer to stepdad. He has a bunch of mindless little creatures that do his bidding and speak total gibberish, so he’s basically an animated Glenn Beck, only Gru actually repented. This time out, he gets recruited by the willowy Lucy (Kristen Wiig) to help identify which supervillain has stolen some chemical stuff that turns his yellow, silly minions into purple, cannibal minions.

The main suspect is Eduardo (Benjamin Bratt), who is one “Johnny Depp as Tonto” away from winning “racial stereotype of the weekend.” He runs a restaurant called Salsa and Salsa, has a chest tattoo of the Mexican flag and has an accent think enough that Rosie Perez called it “cartoony.” The only thing that saves it, of course, is the fact that actually is a cartoon. As Lucy and Gru investigate Eduardo, they also investigate their feelings. And their feelings are that both of them wanna get some.

It may sound like a lewd way to talk about an animated kids film, but this film contains minion butt cheeks, various displays of bodily function and a sight gag that involves Gru shaking his crotch at inanimate objects. Also, all of those things are pretty hilarious. Sorry, but if math is the universal language we might use to talk with extraterrestrials, fart jokes are how we’ll make them laugh. Laughter is a huge part of Despicable Me 2, in that it is a series of loosely connected bits and gags. If you have a low threshold for anthropomorphic Twinkies in coconut bras, seek entertainment elsewhere.

There’s something nice about a series that makes a stepdad the good guy. Not only have all step-parents taken a beating in animated fare for forever, the typical family film trope involves a father who learns there’s “more to life than work.” The loose, accepting family dynamic in this series is endearing as hell, with gender stereotypes frequently obliterated and sincere emotions displayed on all sides. Not too bad for a CGI comedy.

The best compliment you can give to Despicable Me 2 may also explain why it doesn’t get a higher grade here: it’s slight, mass-appealing fun. Nothing particularly inspired, save for a killer “Love Boat” reference and the possible transgendered nature of one of the minions, but generally genial. In a summer that has given families with young ones a choice between a Pixar prequel and snails racing against cars, Despicable Me 2 is a fine waste of time.