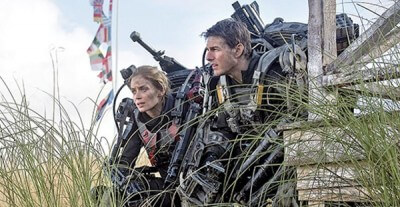 Every time Tom Cruise, the greatest modern matinee idol, makes a new movie, everybody rushes to fuse artist and art and spews out some variation of “I just don’t like him anymore.” America’s collective moral stance seems to be that we should never forget that someone belongs to a douchey faith but we should purge memories of other horrid things actors have done, like domestic abuse. Disagree? Tell it to Sean Penn’s two Oscars.

This is particularly vexing because Cruise’s latest, Edge of Tomorrow, is easily the most fun film thus far this year…and it is flopping at the box office. Some of that has to do with moviegoers’ overreliance on brand recognition, as this film is neither remake nor reboot nor beloved comic book nor former fairy tale. Some responsibility also goes to whatever marketing genius focus-grouped his way to a wretched title when the novel that was adapted had such a memorable one (All You Need is Kill). But, for the most part, this comes down to “I just don’t like Tom Cruise anymore.” Ugh. Stick to your guns on that one, partner, and you’re really gonna miss out.

Writers Christopher McQuarrie and Jez and John-Henry Butterworth fuse video game sensibilities and Groundhog Day’s concept. Cruise plays Major William Cage, a military PR man who is a soldier in name and rank only. He’s so cowardly and combat-phobic, he makes the Lion from The Wizard of Oz look like an MMA fighter. Facing an alien horde that has claimed all of Europe, humanity is banking on one final assault to turn the tide.

Cage has been doing the “talking head” cable news circuit, promoting the assault with buzzwords, but General Brigham (Brendan Gleeson) doesn’t think that’s enough. He orders Cage to the front lines. When he tries to desert, he is forcibly remanded, strapped into a mechanized war suit and dropped into battle…where he dies…over and over again. Each time he wakes up on the morning of the battle. He soon realizes his only hope is Rita Vrataski (Emily Blunt), “The Angel of Verdun” or, alternatively, the Full Metal Bitch. She’s the single most badass female sci-fi character since Ellen Ripley, toting a helicopter-blade sword and an “I dare you to say something” attitude. Cage, the skittish housecat, must rely on Vrataski’s brains and brawn in order to save the world.

The film is blockbuster perfection. Visually, the aliens, or “Mimics” as they’re called, are wholly unique. They are tentacled, whirling death dealers…murder octopi basically. Story-wise, the development of Cage and Vrataski as characters is inextricable from the film’s resolution. Tonally, the movie is unafraid to be fun and silly, eschewing the grim and gritty for clever and spirited. Director Doug Liman has crafted divine summer entertainment with heart and brains, and it is flopping because people “just don’t like Cruise anymore.”

Edge of Tomorrow deserves praise and viewers. It is proof that calculated cynicism and recycled content aren’t the only ways to deliver big-budget, mainstream entertainment. See it now, because unlike Cage, we don’t get chronological mulligans.