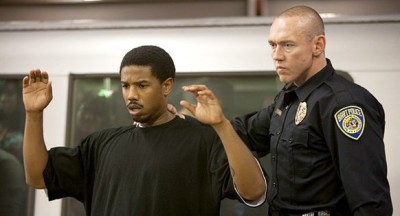 I believe it’s a lack of context, not empathy. Because if it’s a lack of empathy, we’re screwed, doomed as a country, culture, maybe even species. The dismissal of the poor as bottom-feeding, system-exploiting moochers comes from not having a full perspective of their actual lives. The racial bigotry inherent in our judicial system would cause outrage if average citizens truly understood the human beings caught up in the criminal courts. I have to believe these things. I have to believe that if we had a true understanding of each other, we would help and not judge, we would comfort and not criticize, because the alternative hurts too damn much to even consider.

Fruitvale Station is tangible context in fictional form. It’s a film about a real-life incident that’s not about a real-life incident; it’s about a real-life person. That person is Oscar Grant (Michael B. Jordan). Oscar is a kind-hearted, wide-grinning young father; he’s the kind of guy who makes small talk with a sweet, confused white girl in the deli and then calls his grandmother on his cell to give her the family fish fry recipe. But there’s fire there; there is legitimate anger releasing itself in illegitimate ways.

He is a man who genuinely loves his girlfriend, Sophina (Melonie Diaz), but cheats on her. He is a man who genuinely loves his mother (Octavia Spencer) but knowingly disappoints her. He is a man who wants to reform but keeps making the same mistakes over and over. And those mistakes catch up with him on a train in San Francisco on New Year’s Eve 2008. But it’s not just his mistakes that find him; it’s a tidal wave of errors this country is loathe to confess, systemic flaws that manifest in the physical form of two police officers, Caruso (Kevin Durand) and Ingram (Chad Michael Murray). It is a story America knows by heart.

Writer/director Ryan Coogler and his lead actor, Jordan, demonstrate the unique ability of film to offer perspective. I have never not known privilege. Born to middle class white folks, still surrounded by middle class white folks, not only have I not known circumstances like Oscar’s, I haven’t even known that many people like Oscar. But thanks to Coogler and Jordan, I kinda do now. At the very least, I have more context. Most of that is Jordan’s doing. His emotionally naked, spectacularly sophisticated performance shifts from likeable to dangerous, admirable to shady. It requires him to be as real as fake can be.

There was much talk of Fruitvale Station in the wake of the George Zimmerman verdict. Understand: Oscar is not Trayvon. Oscar was not gunned down by a vigilante. Trayvon was not a felon. Those things matter. Context matters. And the context of Fruitvale Station helps explain why people tried to make Trayvon’s weed smoking an issue. It helps show how our system is broken on the front end and the back end. Most of all, it is a sobering reminder of our need to seek out stories of lives different from our own.