Home » Film » The Bacon of Blockbusters 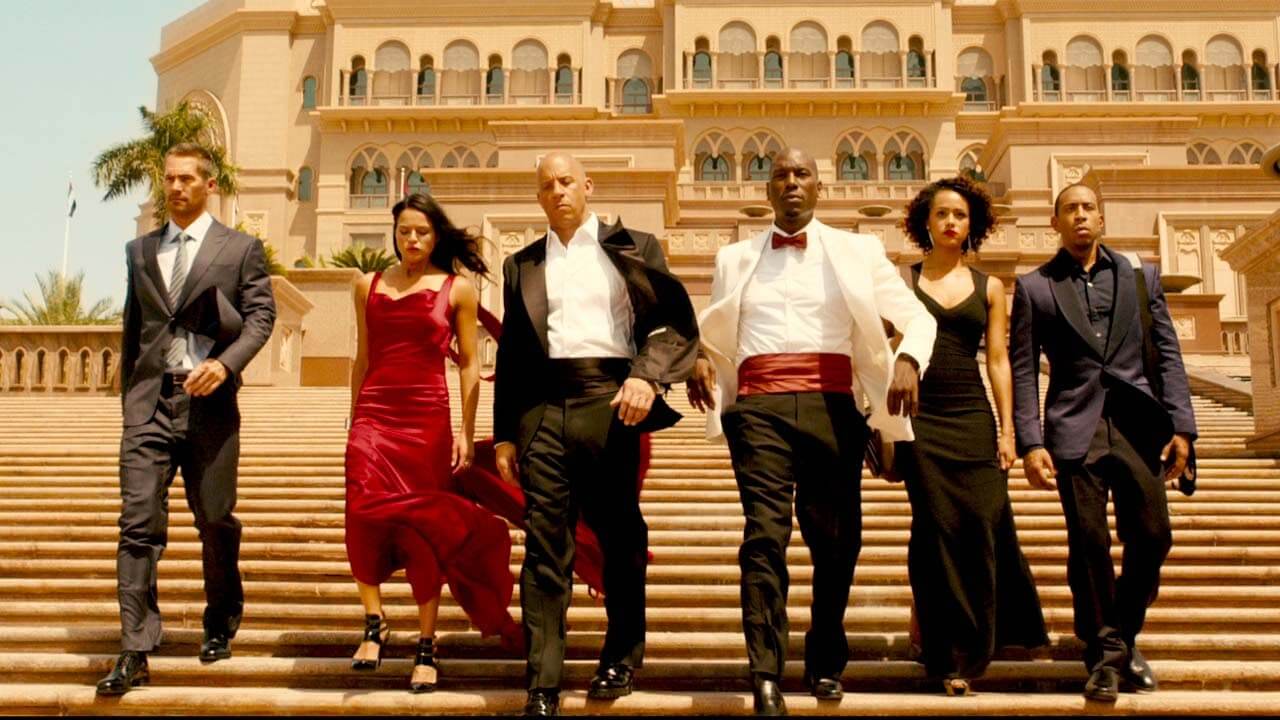 Hands down, my favorite discussion in the wake of Furious 7 doing to the box office what Vin Diesel does to elocution (which is to say, stomping it to oblivion): “Do we really need another Fast and Furious movie?” No. No we do not. We also didn’t need to land on the moon. Nor did we need to create the 1967 Ford Mustang. We did it because it was awesome and we could, dammit.

Hail Fast and Furious, a franchise that has somehow become a champion of transnational, multicultural bad assery. Its diverse cast has now spent 2 full movies kicking the shit out of British people, as if stomping on Jason Statham’s face was a comeuppance for colonialism. Whereas the blockbusters of the 2000s mostly whined and moped about governmental indecency and global terrorism nightmares, the Fast and Furious series has become impossibly optimistic, championing postmodern concepts of family and spinning a simplistic tale of American redemption. Oh, and each installment is progressively more beautifully and gloriously dumb.

The “plot” this time out, as if we need bother with such crap when there are cars to drive fast and people to punch, sees Deckard Shaw (Jason Statham) looking to murder Dominic Toretto (Diesel) and his crew, including Letty (Michelle Rodriguez), Brian (Paul Walker), Roman (Tyrese Gibson), Tej (Ludacris) and Hobbs (Dwayne “The Rock” Johnson). He’s out for revenge because the gang curb stomped his brother last time. That’s it. That’s the whole point.

Now, for some reason, despite the fact that literally everywhere the gang goes they run into Shaw, they must go on a bizarre side quest to steal some MacGuffin computer device that would let them find Shaw. You’re not reading that wrong. There are multiple scenes where they are fighting against the bad guy while attempting to steal a device that will let them find the bad guy they are currently fighting. It’s some batshit MC Escher, paradoxical logic.

Who cares! The gang soon finds themselves skydiving inside of cars, battling against drones (thanks, Obama!) and destroying a very large portion of a major city. If you remember last time out, there was a scene in which Toretto appeared to gain the power of flight. This time, the concussive power of him stomping flattens an entire parking garage. He hath become Zeus! Thor! Superman! The destroyer of worlds!

The first half of Furious 7 is a bit plodding. There’s too much clever business trying to tie up the continuity of the franchise, as if any of us are breaking out flow charts to map the chronology. But the second half is as good as it gets for pure, unadulterated, guilt-free escapism. Movies used to do that. Before films were “events” burdened with glorious purpose, they were frivolous and gossamer adventures designed to free one from the unspectacular confines of reality. We don’t need more Fast and Furious movies. But my goodness do I hope they keep making them.