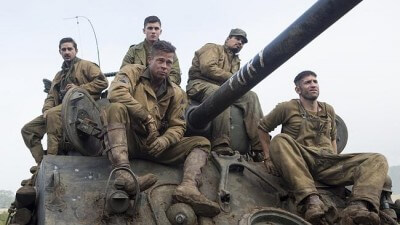 Inside of writer/director David Ayer’s Fury is a tight, 90-minute, “we will hold this line” war movie populated with complex characters and surprisingly good performances. Problem is, it was slipped into the carcass of a dirty, confused, overly serious, inconsistently grotesque snoozer in which Shia LaBeouf cries so often you’ll want to beat the accountant’s mustache off his stupid face if you don’t already.

The film’s opening text sets hopes impossibly high for self-awareness, describing the timing near the end of World War II and the superiority of the German tanks. “Oh boy,” you may think, “these scrappy underdogs will fight to the death taking down the Fuhrer’s killing machines!” Nope! Mostly they talk about how bad war is, punch each other and cry.

We meet Don “Wardaddy” Collier (Brad Pitt), whose high-school-production-level fake facial scars tell us he’s nobody to F with—bonus points if you decided that “F” stood for “functionally communicate” with. His tank crew is full of, well, absolute shitheels. There’s Trini “Gordo” Garcia (Michael Peña), who loves whores; Grady “Coon-Ass” Travis (Jon Bernthal), whose nickname should just about explain things and Boyd “Bible” Swan (Shia LaBeouf), a Jesus freak with permanent weepy eyes and “punch me” face. When their gunner dies on a mission only their tank, called “Fury,” survived, they are saddled with a noob soldier, Norman Ellison (Logan Lerman).

Whenever the movie named after a tank shows a tank in a tank fight, it’s awesome…even if for some reason the Nazis all use green “tracer bullets” and the Americans all use red “tracer bullets,” making it look like a laser fight. But Fury keeps bogging down to make a remedial thematic lesson about war: it can turn good men into bad ones. The film completely stalls out in a remote German town, just so one character can have the obligatory war romance cliché. That said, considering the sheer volume of tasteless excuses to get actresses on screen topless, kudos to Ayers for wedging a gratuitous scene of Pitt slowly washing his chest for like 20 minutes.

Pitt is great as the bad good man and Bernthal is great as the good bad man. The others are mostly serviceable, save for the aforementioned mustachioed ham who shall remain named Shia LaBeouf. Fury is exactly what you’d expect when you let the guy who made Training Day make a war movie. Ayers is not the first director to incorrectly assume we would enjoy watching interesting characters in an interesting setting do very little for extended periods of time.

If you asked him, chances are Ayers would claim that the meat of the film, the last 40 minutes, was “set up” by the methodical pauses preceding it. He’d be wrong, but that’s probably what he’d say. Instead, that last sequence and others throughout the movie feel like fragmented bits of an awesome flick that jumped on a grenade. If you can mentally reassemble it, which some definitely will do, Fury will be the movie it should have been.